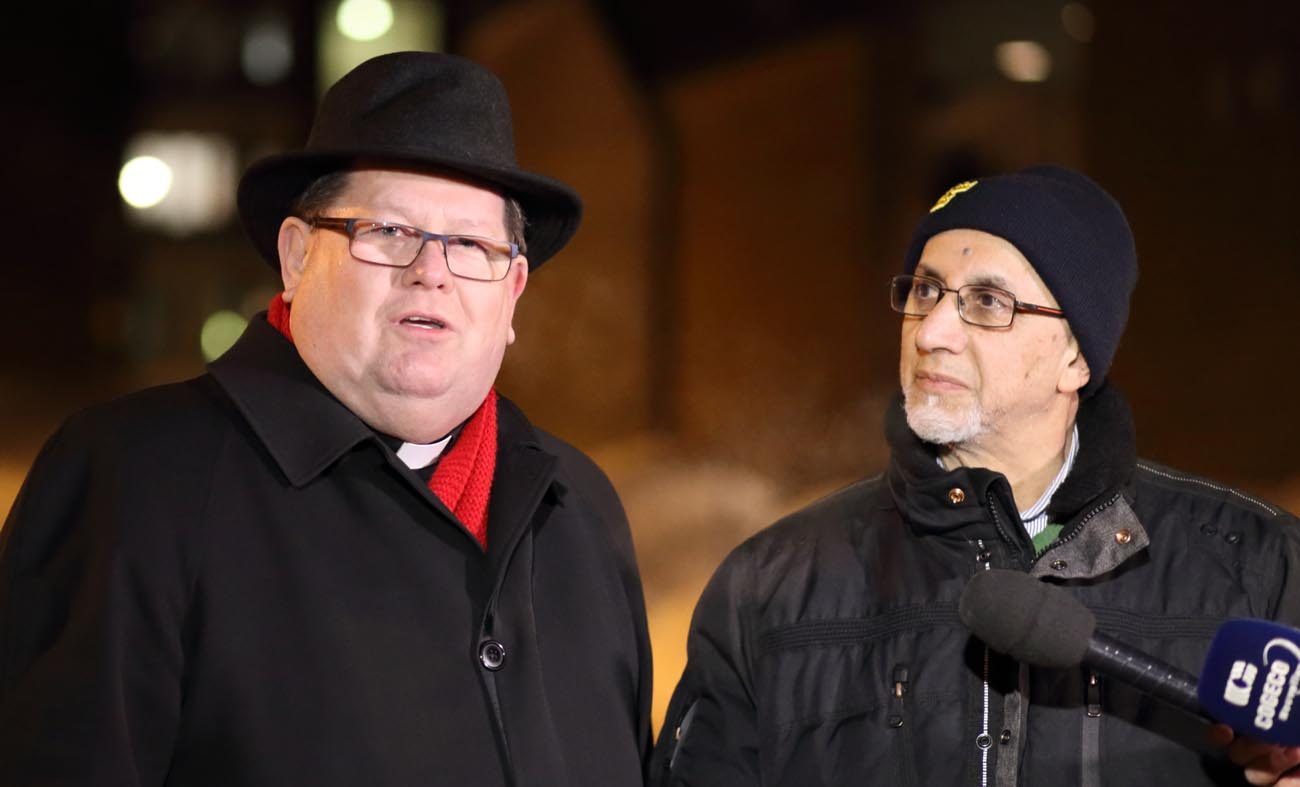 Cardinal Gerald Lacroix of Quebec and Boufeldja Benabdallah, co-founder of the Quebec Islamic Cultural Center, speak during a press conference before a solidarity Mass Jan. 31 at the Notre-Dame-de-Foy church in Quebec City. The Mass was celebrated for the six victims who were killed by a lone gunman Jan. 29 at the Islamic center, which is located next to Notre-Dame-de-Foy. (CNS photo/Philippe Vaillancourt, Presence)

QUEBEC CITY (CNS) — People of many faiths gathered for a solidarity Mass at Notre-Dame-de-Foy church, next to the mosque belonging to the Quebec Islamic Cultural Center, where six men were killed by a gunman while they were praying.

Cardinal Gerald Lacroix, who had returned from Rome just hours before, called everyone to reject violence.

“Men and women of dialogue: This is what we are called to be. Full of respect and truth. Like Jesus, let us be mindful of the needs of those we live with. Let us learn to know them and to advance with them. We have a lot to gain from listening, meeting, and living together. We are made to enrich each other, and we’ll do it by learning how to love each other,” said Cardinal Lacroix.

Muslim leaders and members of the Muslim community, as well as Quebec Premier Philippe Couillard and other high-level politicians, were in attendance Jan. 31.

The co-founder of the Islamic center, Boufeldja Benabdallah, brought many to tears with his remarks. Referring to Alexandre Bissonnette, 27, the only suspect who is now accused of first-degree murder and attempted murder, Benabdallah said it is not Canada’s fault, but the acts of one individual who got lost.

One by one, Benabdallah named all his friends killed two days before. He said that through it all, the doubts he had about racism and islamophobia are fading. All of it can be erased “by the love God put in ourselves.” 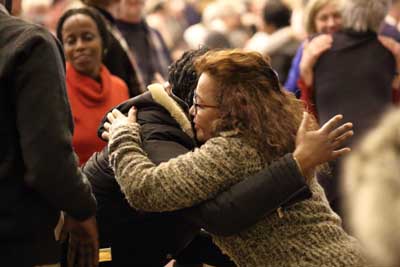 Women exchange the sign of peace during a solidarity Mass Jan. 31 at the Notre-Dame-de-Foy church in Quebec City for the six victims who were killed by a lone gunman Jan. 29 at the mosque belonging to the Quebec Islamic Cultural Center. Notre-Dame-de-Foy is located next to the mosque. (CNS photo/Philippe Vaillancourt, Presence)

Cardinal Lacroix told him that he wished to give him a gift he had himself received the day before from Pope Francis: a hug. Cardinal Lacroix and Benabdallah then held each other in their arms while the assembly applauded.

Cardinal Lacroix, who was in Rome when the shooting occurred Jan. 29, met briefly with Pope Francis Jan. 30 before heading home. The pope assured the cardinal of his prayers for the victims of the attack on the mosque. A Vatican statement said the pope highlighted the importance of Christians and Muslims remaining united in prayer in these moments.

Over the years, the mosque had been targeted by hate crimes. A few months ago, a pig’s head was left at the front door, sparking indignation throughout the city.

Quebec City is the capital of the province and its second-biggest city, with more than 500,000 people. It has 6,100 Muslims.