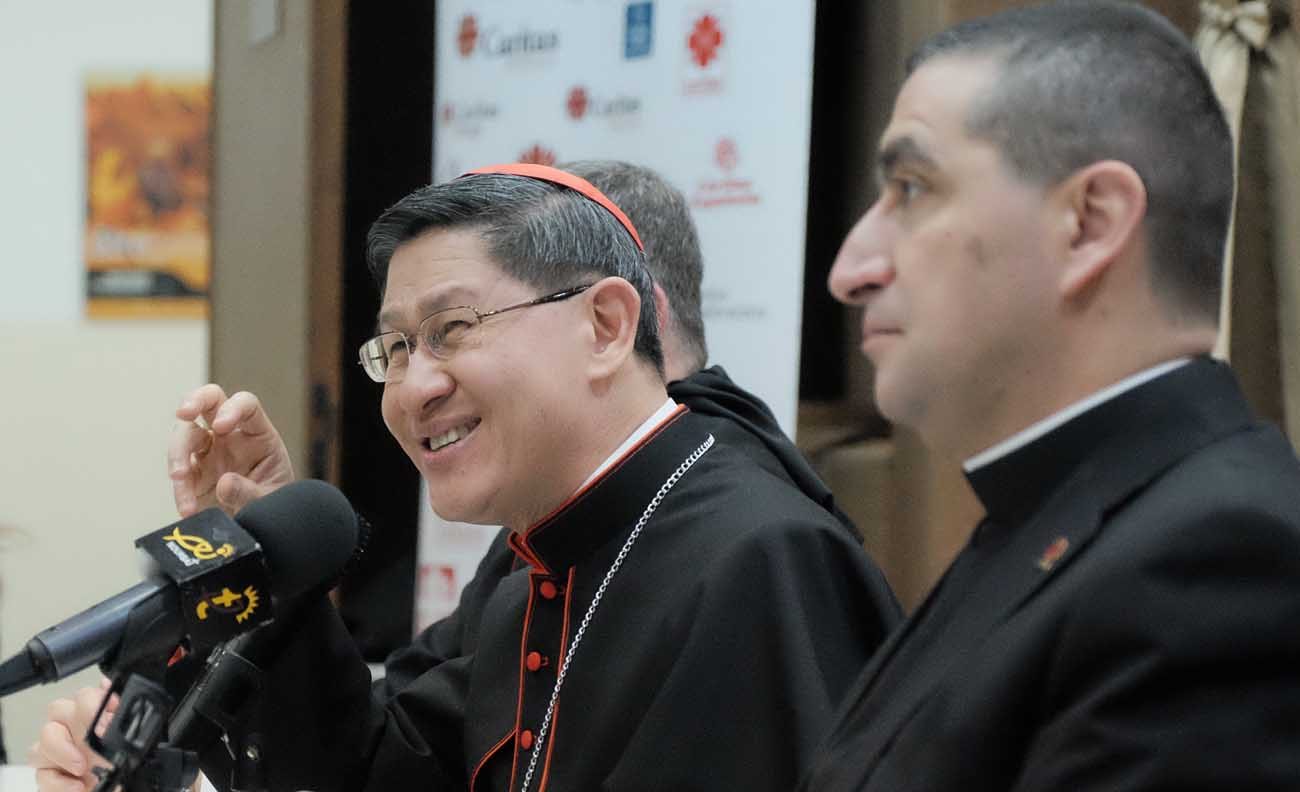 Philippine Cardinal Luis Antonio Tagle of Manila, president of Caritas Internationalis, speaks alongside Maronite Father Paul Karam, president of Caritas Lebanon, during a Jan. 30 visit to Beirut. The global crisis of refugees is "a complex problem," Cardinal Tagle said, "but we can't close our eyes to some of the good things they are giving to the countries that receive them, if they are given a chance." (CNS photo/Jean Khoury, Caritas Lebanon)

BEIRUT (CNS) — Many Western nations forget that their countries were built on migrants, said the president of Caritas Internationalis.

The global crisis of refugees is “a complex problem,” Cardinal Luis Antonio Tagle of Manila, Philippines, said during a visit to Lebanon, “but we can’t close our eyes to some of the good things they are giving to the countries that receive them, if they are given a chance.”

The cardinal met with a group of more than 100 Caritas Lebanon staff and volunteers before attending a Jan. 30 meeting of the Catholic Biblical Federation, of which he is also president.

The Caritas president told the Lebanon team that he, too, “has migrant DNA” because his Chinese grandfather, at a young age, was sent to work in the Philippines due to the struggles the cardinal’s widowed great-grandmother faced in taking care of her children.

Cardinal Tagle then shared some of his Caritas experiences with the group and listened to their stories and concerns.

Caritas Lebanon has more than 15 centers and shelters for migrants and refugees, 10 medical and social centers and operates 13 mobile clinics. The country with a population of approximately 4 million is hosting almost one-third that number of refugees. While the U.N. High Commissioner for Refugees says there are 1.2 million Syrian refugees alone registered with the agency in Lebanon, Caritas Lebanon estimates there actually more than 1.5 million, because all are not registered.

Cardinal Tagle reminded the Caritas Lebanon group that the international organization is the social service arm of the church.

Shortly after he was elected president of the global organization in May 2015, the cardinal recounted, he traveled to Greece to visit a refugee camp.

“Some of my friends said, ‘There are many tourist opportunities in Greece. Who goes to a refugee camp? Are you crazy?’

“I responded, ‘Yes! Crazy in love,'” the cardinal said.

“We are all crazy here,” he said to applause from the Caritas Lebanon staff and volunteers.

He reminded the staffers that they were doing hard, sometimes dangerous work, and he shared examples of how people have expressed thanks for Caritas’ help.

In one example, he recalled his visit to Lebanon in February 2016 when he visited Syrian refugees in Zahle, near the border of Syria. Cardinal Tagle said he was approached by an elderly man who seemed to be the “patriarch” of the settlement.

“I thought he was singing and dancing,” the cardinal said, but someone translated what the man was saying: “‘I would like to thank Caritas. You are the only ones thinking of us.'”

He announced that Caritas Internationalis’ next campaign focuses on migration and migrants and told those gathered: “We will count on Caritas Lebanon for a lot of insight to enrich the international campaign.”

A Caritas Lebanon social worker shared that when she was assigned in 2007 to assist with the Iraqi refugee crisis in Syria, she was astounded when a taxi driver during her stay would not accept payment for the ride.

“I will not forget the face of Caritas,” he told her, explaining that in 2004 while working as a laborer in Lebanon, he was assisted by Caritas.

PREVIOUS: ‘Amoris Laetitia’ not up for personal interpretation, cardinal says

NEXT: Canadians gather for Mass at church next to mosque where six were killed