Caritas center in Belarus offers support to children with cancer 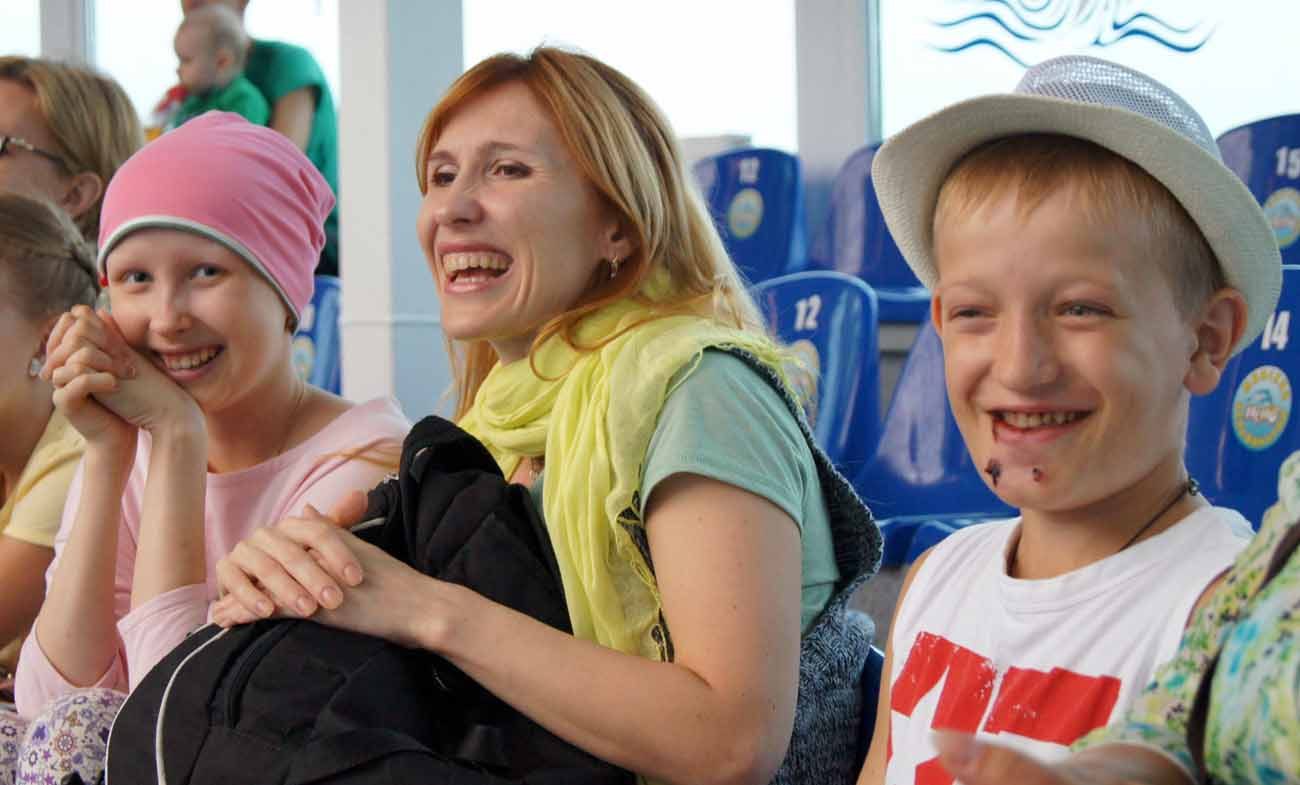 The mother of a patient smiles alongside children in 2016 at St. Luke Social and Rehabilitation Center in Liaskovka, Belarus. With the help of the local Caritas agency, the center was opened in 2003 as a housing facility for children who undergo treatment for Pediatric Oncology, Hematology and Immunology. (CNS photo/courtesy Caritas of the Minsk-Mohilev Archdiocese)

LVIV, Ukraine (CNS) — Svetlana Kudriavets had never worked with children with cancer when she became the coordinator of St. Luke Social and Rehabilitation Center in Lieskauka, Belarus, last year. Now she feels that the work with these special children is particularly rewarding.

“These kids have a unique maturity, they understand things which sometimes even adults fail to understand. They are open and feel deeply all lies and hypocrisies. I’m always moved how they support and help each other,” she told Catholic News Service. “You just need to be close to them and share your love and warmth.”

With the help of the local Caritas agency, St. Luke Social and Rehabilitation Center was opened in 2003 as a housing facility for children who undergo treatment in the nearby Belarusian Research Center for Pediatric Oncology, Hematology and Immunology in Minsk, believed to be one of the world’s biggest hospitals for children with cancer.

Childhood cancer became an acute issue in Belarus after the Chernobyl nuclear disaster in 1986, during which the country was exposed to large amounts of radiation. Every year some 300–350 children in Belarus are diagnosed with a cancer, and many are treated at the Minsk hospital. However, there are not enough housing facilities for children and their parents. Families with a sick child often have no money to rent an apartment close to the hospital.

St. Luke’s offers free housing for 19 families — a child and one parent. Preference is given to underprivileged families, children who need treatment for long periods, and those who live in remote areas of the country. Caritas coordinates its activity with the state hospital.

“Since the establishment, we hosted approximately 1,000 children,” said Capuchin Brother Andrei Zhylevich, Caritas director. “Some children come just for a week or two for a brief examination, some stay for eight or nine months. The center helps children and parents of all denominations and nationalities.”

If the state hospital provides treatment, St. Luke’s Center offers the positive emotions and atmosphere to speed up the recovery through workshops, art therapy, feasts and plays.

Team member rejoice with the parents when children recover.

“We had one teenage girl. She was very active before the disease, played a piano and danced in a ballet troop,” said Kudriavets. “Because of the disease and chemotherapy, she lost her previous life and thus enthusiasm. At first she refused to take part in our activities at all, but later became very engaged. The disease has receded. We stay in contact with her mom and were happy to know that she returned to music.”

In addition to coordinating the center’s 30 regular volunteers, Kudriavets works with different volunteer groups from the universities and other organizations, for example hospital clowns.

Caritas of Minsk-Mohilev Archdiocese has different programs for children with cancer, disabilities and sensory processing disorders. The agency hopes to launch a special room in St. Luke’s to help children develop their sensory skills in a calm and friendly atmosphere. The U.S. Conference of the Catholic Bishops Office of Aid to the Church in Central and Eastern Europe is funding equipment needed for the room.

Caritas actively works with the children who live in Lieskauka and in Minsk. This year the agency is planning joint mini-vacations for children with disabilities and healthy children.

“In Belarus as in other post-Soviet countries, people with disabilities are invisible,” said Brother Zhylevich. “For decades they were hidden in special houses or their apartments. Now this situation is changing but very slowly.”

He said he believes that children need to learn the solidarity and understand that children with disabilities have the same rights as healthy ones. He told of one 10-year-old girl who expressed her wish to be a volunteer in the center, together with her friends.

“I don’t have plan for them yet, but I will come up with a one,” he told CNS with a chuckle.

Another idea is to open a play room for children that includes a place for parents, said Kudriavets, who noted, “Parents’ lives are deeply affected by the sickness of their children; we would like to distract them a bit and also to give some knowledge and skills.”

Brother Zhylevich said as he travels across Belarus visiting orphanages and nursing homes, he sees other needs. For instance, Caritas is hoping to establish a system of warm-meal delivery for the homeless in Minsk.

Brother Zhylevich said he believes that it’s important to spread the word about Caritas activities.

“We need to shout around about the good things. We often hear about tragedies, terrors, deaths, and the good is so shy and humble that people don’t notice it. We need to talk about the good to make it contagious. Young people try to find their place in life. The good needs to take place in their souls,” he said.

NEXT: If the shoe fits: Papal remarks on immigration apply to U.S., too