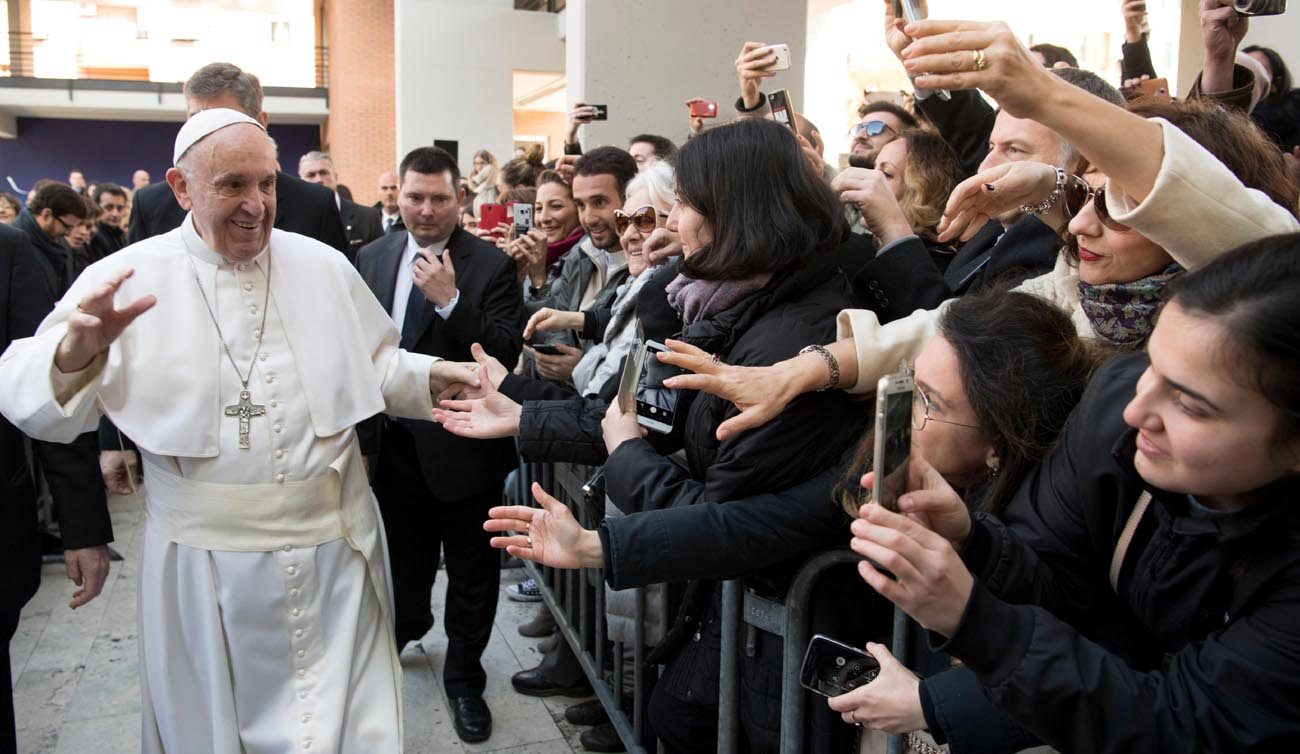 ROME (CNS) — Addressing the fear of immigrants, dissatisfaction with a “fluid economy” and the impatience and vitriol seen in politics and society, Pope Francis told Rome university students to practice a kind of “intellectual charity” that promotes dialogue and sees value in diversity.

“There are lots of remedies against violence,” but they must start first with one’s heart being open to hearing other people’s opinions and then talking things out with patience, he said in a 45-minute off-the-cuff talk.

“It necessary to tone it down a bit, to talk less and listen more,” he told hundreds of students, staff and their family members and friends during a visit Feb. 17 to Roma Tre University.

Arriving at the university, the pope slowly made his way along a long snaking pathway of metal barricades throughout the campus, smiling, shaking hands and posing for numerous selfies with smiling members of the crowd. When handed a small baby cocooned in a bright red snowsuit for a papal kiss, the pope joked whether the child was attending the university, too.

Seated on a platform facing an open courtyard, the pope listened to questions from four students, including Nour Essa, who was one of the 12 Syrian refugees the pope had brought to Rome on a papal flight from Lesbos, Greece, in 2016.

The pope said he had received the questions beforehand and wrote a prepared text, but he preferred to answer “from the heart” and be “more spontaneous because I like it better that way.”

Asked what “remedy” could counteract the world’s violence and how to live well in such a fast-paced, globalized world of “social networks,” the pope said today’s frenetic pace “makes us violent at home.”

Family members don’t bother saying “good morning” to each other, they absentmindedly say “hi” or eat together in silence, each absorbed with a smartphone, he said.

The faster the pace in life, the more people become “nameless” because no one takes the time to get to know the other, ending up with a situation where “I greet you as if you were an object.”

The tendency to de-personalize others, which starts in one’s own heart, at home and with relationships, “grows and grows and it will become violence worldwide,” he said.

“In a society where politics has sunk very low — and I’m talking about society around the world, not here — one loses the sense” of building up civic life and social harmony, which is done through dialogue.

Pope Francis commented on the way many electoral campaigns and debates feature people interrupting each other. “Wait! Listen carefully to what the other thinks and then respond,” he said, and ask for clarification when the point isn’t understood.

“Where there is no dialogue, there is violence,” he said.

The pope said universities must be places dedicated to this kind of openness, dialogue and respect for a diversity of opinions and ideas.

People go to university to learn and listen, but not passively, the pope said. It is a place to actively seek the good, the beautiful and the true, as a journey done together over time.

He also critiqued the so-called “fluid economy,” which leads to a lack of stable, “solid” employment.

Networked trades and transactions in which a person can make — like a business friend of his did — $10,000 in 10 minutes trading commodities is an example of this “fluid” economy, he said.

This “liquidity” erases “the culture of work” and everything that is “concrete” about labor “because you cannot work and young people don’t know what to do,” which can lead them to addictions or suicide.

“Or the lack of work leads me to join a terrorist militia. ‘At least I have something to do and have meaning in my life.’ It’s horrible,” he said.

Essa, the 31-year-old Syrian woman, told the pope she, her husband and small boy were living in a refugee camp in Lesbos until “our life changed in one day, thanks to you.” Already possessing degrees from her studies in Syria and France, Essa was finishing a degree in biology at Roma Tre.

She asked the pope to address the fear of immigrants, saying she remembered a journalist on the papal flight a year ago asking about people’s fear of those coming from Syria and Iraq and whether they threatened Europe’s Christian culture.

“How many invasions has Europe had?” during its long history, the pope asked.

Europe has been built upon invasions and movements of peoples, he said. “Migration is not a danger, it is a challenge to grow,” he said.

It is only logical that people migrate to escape from conflict, exploitation, hunger and lack of development, he said.

“Don’t exploit. Don’t be the bullies that go to exploit” these nations already suffering so much, he said.

Asking his audience to reflect on how the Mediterranean Sea has become “a cemetery” with the drownings of so many immigrants, he said those fleeing their homelands first must be seen as one’s own “human brothers and sisters. They are men and women like us.”

Each country must determine how many refugees and migrants it can properly welcome and integrate with structures and resources in place so the newcomers can become contributing members of the community and not isolated or “ghetto-ized.”

While trying to grapple with the way times change, he said, it’s also true some things just stay the same. “If we don’t learn to understand life as it comes, we will never ever learn to live it.”

Life is like being a “goalie” where people have to be alert and ready to grab the ball from whatever direction it comes, Pope Francis said. Today “is a different age, that is coming from somewhere I didn’t expect, but I have to take it, I have to take it as it comes without fear.”

NEXT: Church leaders hope Trump does not repeal conflict-minerals provisions