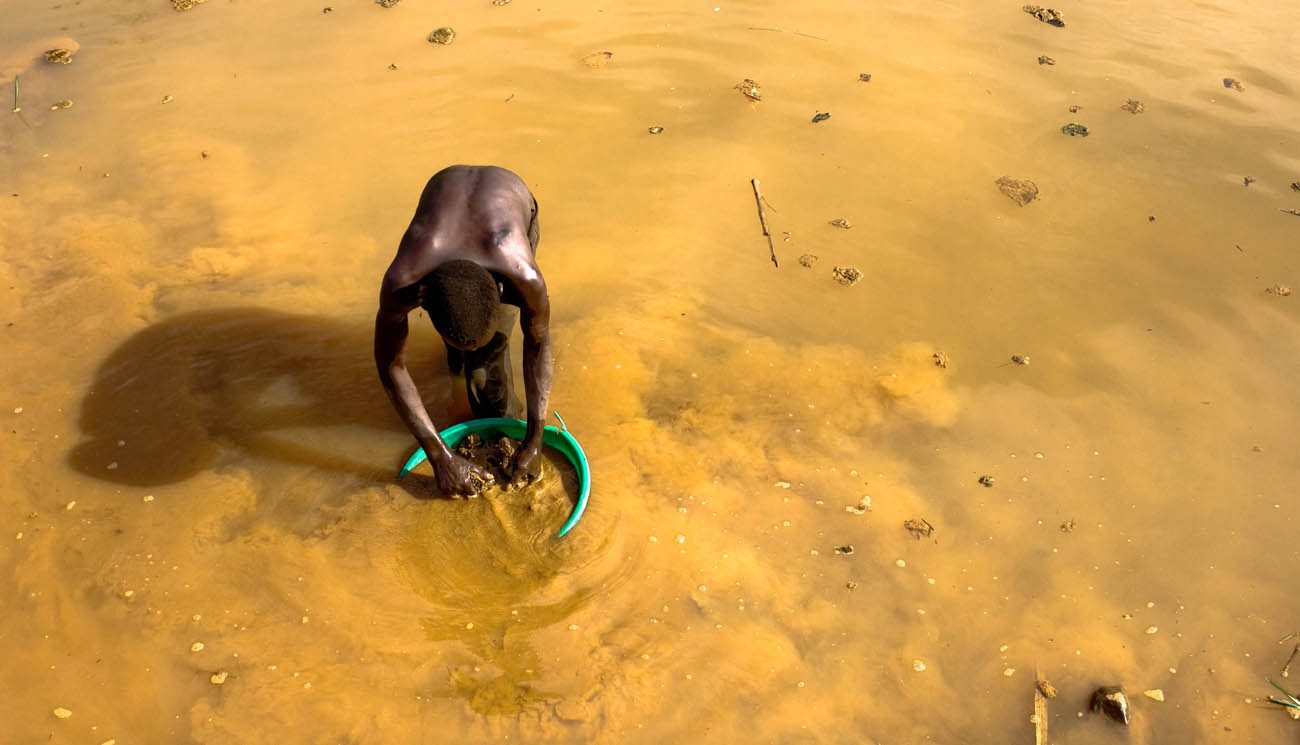 A Congolese mine worker rinses gold-rich earth out of the pit for water processing in 2009 in Chudja. Church leaders say telling companies they no longer had to disclose whether their firms use "conflict minerals" would be a bad move. (CNS photo/Marc Hofer, EPA)

OXFORD, England (CNS) — Church leaders and organizations in Africa, Europe and the United States said it would be disastrous if U.S. President Donald Trump issued an executive order telling companies they no longer had to disclose whether their firms use “conflict minerals” from Congo.

Western firms have been accused of working with violent gangs in Congo to obtain minerals used for producing mobile phones, laptops and other consumer objects, and of allowing trade in resources to perpetuate human rights violations.

In the United States, the chairman of the U.S. bishops’ International Policy Committee wrote the acting head of the National Security Council urging Trump not to suspend the rules related to Section 1502 of the Dodd-Frank Act.

“Congolese die every day in the illegal mines and at the hands of the armed groups that destroy communities in order to expel them from potential mining sites,” wrote Bishop Oscar Cantu of Las Cruces, New Mexico, committee chairman. “The estimated death toll in the Congo is the highest since the end of World War II. The international community, including our own nation, nongovernmental agencies and the church, provides emergency assistance to displaced and traumatized persons and families — assistance that has real financial costs that do not appear on the balance sheets of corporations.”

Bishop Fridolin Ambongo Besungu of Bokungu-Ikela, Congo, told Catholic News Service such a ruling would be “a victory for big mining companies” and would “worsen human suffering.”

“Other Western countries have since adopted more modest regulations, and we fear the consequences if this law is now suspended,” he told Catholic News Service in mid-February.

He said if such an order were signed, Congo’s bishops would work with church organizations in the U.S. and Europe to have it reversed.

The 2012 Securities and Exchange Commission ruling, required by Section 1502, does not prohibit companies from buying such minerals, but was designed to force companies to disclose the chain of custody of such minerals in an effort to keep them from helping armed groups, particularly in Congo.

As with other executive orders signed by Trump, a draft was leaked to the press. The draft called for the SEC ruling to be suspended for two years and for the government to review ways of breaking the connection between armed groups in Congo and the sale of these minerals, often used in high-tech devices, including cellphones.

Bishop Cantu noted that in 2011, Bishop Nicolas Djomo, then president of the Congolese bishops’ conference, visited the United States to argue for strong and effective regulations on conflict minerals. Bishop Cantu said people in Congo saw the U.S. legislation “as a true expression of solidarity with the women, families, and villages who have suffered at the hands of those who destroy their communities to mine their resources.”

Bishop Cantu noted that “more than 70 percent of the world’s smelters and refiners” for minerals such as tungsten, tantalum and tin have passed audits showing they were not supporting armed gangs disrupting the local area. “Trade in these minerals is now significantly less lucrative for armed groups because the price for certified minerals is higher than for illegal, illicit minerals. Thus, the free market is now working to offer the right incentives to encourage safe and legal mining activities.”

Stefan Reinhold, advocacy officer for CIDSE, a network of 17 Catholic development agencies in Europe and North America, said “the trend globally, from China to Europe, has been toward introducing guidelines on conflict minerals. We must hope this encouraging trend continues.”

Anne Lindsay, a private sector analyst at CAFOD, Britain’s Catholic aid agency, told CNS Feb. 16 that such a move would contradict steps “now being implemented in 30 countries around the world.”

“Too often people in countries rich in oil, gas and minerals haven’t seen the benefits of their own natural resources — and it was the U.S. which led the drive to ensure extractive companies had to be more transparent,” Lindsay said.

“The U.S. provisions have sparked the passage of similar transparency laws, regulating use of conflict minerals in global supply chains — and international standards for businesses are here to stay,” she said.

Congress has already passed, and Trump has signed, a two-year suspension of another section of the Dodd-Frank bill, which required oil and gas mining companies to publish what they paid foreign governments in countries in which the companies operated.

Bishop Cantu had urged Congress to reject the legislation.

Opponents of the Dodd-Frank provisions said the disclosure rules cost jobs and put U.S. companies at a competitive disadvantage, and had worsened, rather than reduced corruption, violence and hunger in the developing world.

Bishop Ambongo Besungu said such claims were theories invented by “big companies out to destroy the law.”

“What the big companies argue isn’t based on any investigations on the ground,” the bishop told CNS. “To say the Dodd-Frank law has set people apart, and pushed them into poverty and famine, is just the version put about by big capitalists at the behest of the mining companies.”

He said research by the Congolese bishops’ Natural Resources Commission at Walikale, in Congo’s North Kivu province, showed extraction of minerals had been “taken over and militarized” by rebel gangs.