Culture of life the only answer to throwaway logic, pope says 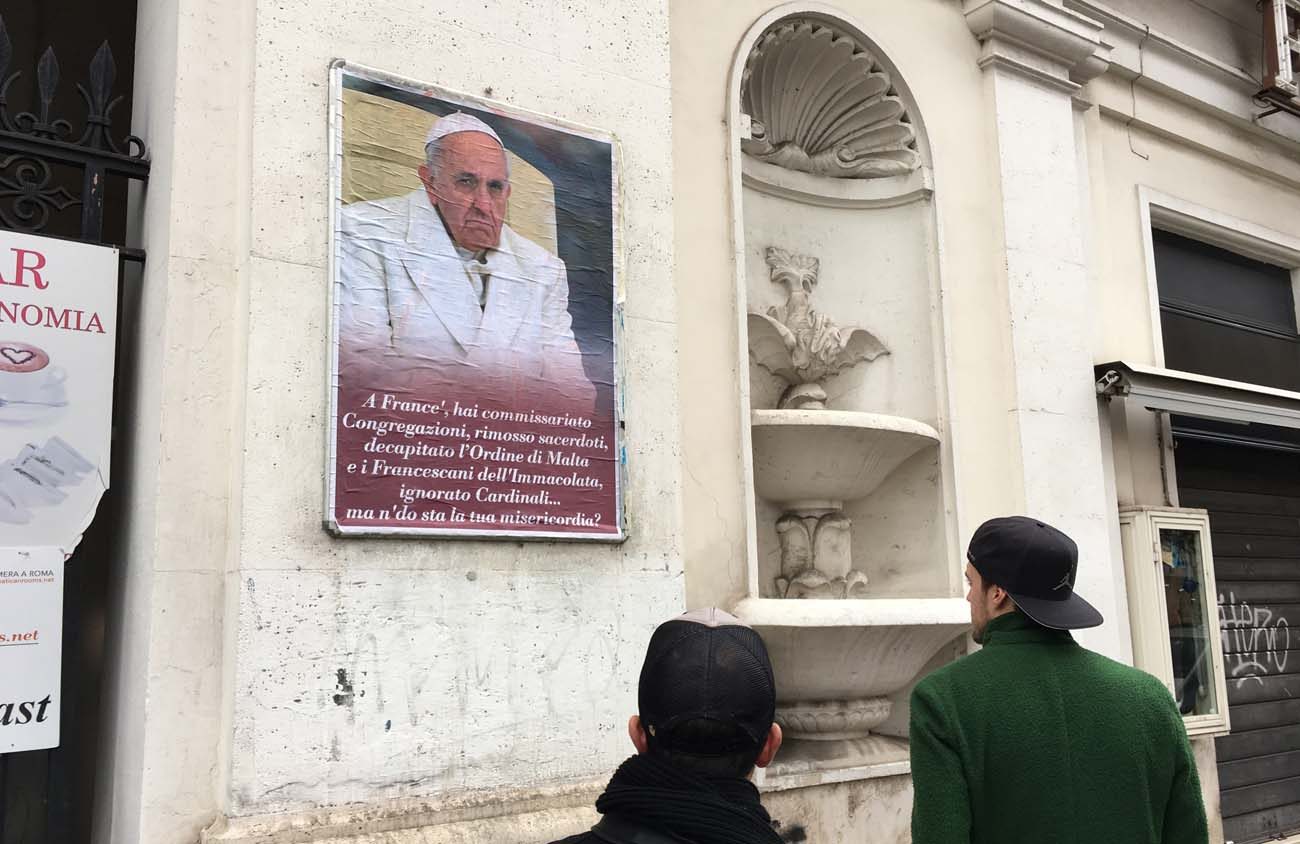 People look at a poster expressing criticism of Pope Francis in Rome Feb. 5. Several copies of the poster were placed in the center of Rome but were quickly covered by city authorities. The poster says in Roman dialect: "Ah Francis, you've taken over congregations, removed priests, decapitated the Order of Malta and the Franciscans of the Immaculate, ignored cardinals... but where's your mercy?" (CNS photo/Paul Haring)

VATICAN CITY (CNS) — A culture that protects life from conception to natural death is the only answer to the idea that some lives are expendable due to inconvenience or population control, Pope Francis said.

Following in the path of St. Teresa of Kolkata, Christians are called to stand up and defend the lives of the unborn and the vulnerable, the pope said Feb. 5 in his remarks after the recitation of the Angelus prayer.

“We are close to and pray together for the children who are in danger with the termination of pregnancy, as well as for people who are at the end of their lives; every life is sacred,” he said.

The pope commemorated the Day for Life celebration promoted by the Italian bishops’ conference. The theme of the 2017 commemoration was “Women and men for life in the footsteps of St. Teresa of Kolkata.”

“Let us remember the words of Mother Teresa: ‘Life is beauty, admire it; life is life, fight for it!’ both for the baby about to be born and the person who is close to death,” he said, repeating again, “Every life is sacred!”

Before reciting the Angelus prayer with pilgrims, the pope reflected on the Sunday Gospel reading in which Jesus tells his disciples they are “the salt of the earth” and “the light of the world.”

While Christians are called to be reflection of Christ’s life “not in words, but by our deeds,” they must also take on the characteristics of salt, which gives “flavor to life with the faith and love that Christ has given us.”

Another fundamental quality of salt that Christians should adopt, he continued, is its ability to preserve from corruption, keeping away “the polluting germs of selfishness, envy and malicious gossip.”

Pope Francis’ call for an authentic witness free from gossip and maliciousness came one day after copies of a poster were plastered around the Rome city center criticizing Pope Francis.

Written in Roman dialect and featuring a stern-faced picture of the pope, the poster said: “Ah Francis, you’ve taken over congregations, removed priests, decapitated the Order of Malta and the Franciscans of the Immaculate, ignored cardinals … but where is your mercy?”

The posters, which were placed anonymously, were taken down or covered with a sign that read “illegal posting” by the city of Rome. The Vatican issued no response to them.

The germs of selfishness and gossip, the pope said in his address, “ruin the fabric of communities, which instead should shine as places of hospitality, solidarity and reconciliation.”

NEXT: Only a slave to God’s love understands true freedom, pope says