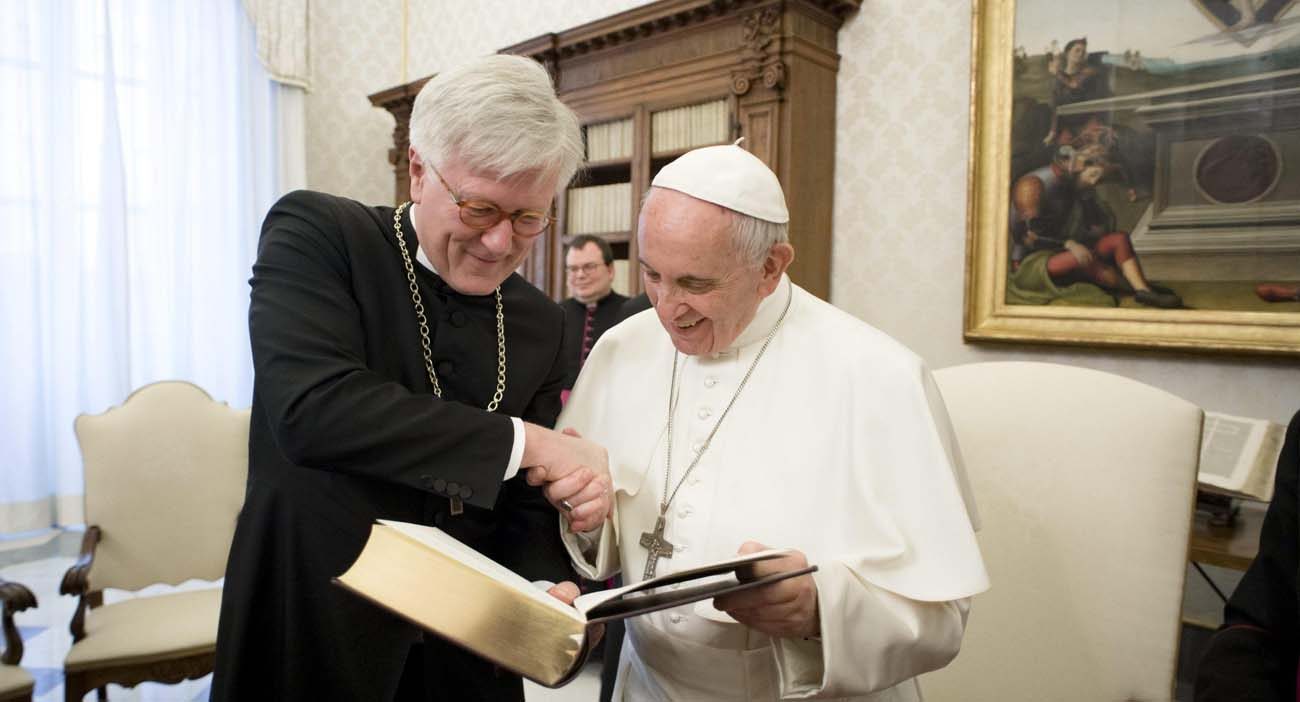 Pope Francis and Bishop Heinrich Bedford-Strohm, chair of the Council of the Evangelical Church in Germany, meet at the Vatican Feb. 6. (CNS photo/L'Osservatore Romano)

VATICAN CITY (CNS) — Christ’s call for his disciples to be one requires that even as they try to resolve their differences on doctrinal and moral questions, they must get used to working and praying together, Pope Francis said.

“Increasingly we are learning to ask ourselves: This initiative, can we share it with our brothers and sisters in Christ?” the pope said Feb. 6 in a speech to leaders of the Council of the Evangelical Church in Germany, a body representing Lutherans, Reformed and United communities.

“The differences in questions of faith and morals, which still exist, remain challenges on the path toward the visible unity for which our faithful yearn,” the pope said. “The pain is noticed particularly by couples who belong to different confessions.”

Lutheran Bishop Heinrich Bedford-Strohm, chair of the evangelical church council, told the pope, “It is sometimes a painful reality in families: couples who share children, grandchildren and friends are divided at the Lord’s table.”

He told reporters later that the group had discussed the question of eucharistic hospitality — sharing Communion in certain circumstances — with Cardinal Kurt Koch, president of the Pontifical Council for Promoting Christian Unity. In general, the position of the Catholic Church has been that regular eucharistic sharing is not possible until full unity has been restored.

Making a change in practice for interconfessional couples, Bishop Bedford-Strohm said, will require serious theological reflection and dialogue, but “for me, everything looks quite optimistic.”

Cardinal Reinhard Marx, president of the German Catholic bishops’ conference, accompanied the group to the papal meeting and told reporters, “there is momentum now for our unity.”

The commemoration of the 500th anniversary of the Protestant Reformation, launched in Germany by Martin Luther, is energizing ecumenical dialogue and activity in the country, the cardinal said. “We cannot do everything in one year, we cannot solve all the theological questions, but we can start.”

The Rev. Annette Kurschus, deputy head of the evangelical council, said it is important to note that the push for greater opportunities for sharing Communion is not coming from church leadership, but from the grass roots, from active Catholic-Protestant couples who suffer when they cannot share such an important part of their lives.

“If we perceive their suffering, the division, then maybe it will be possible to overcome it,” she told reporters.

Pope Francis told the group that when the world is experiencing “serious rifts and new forms of exclusion and marginalization,” Christians have an even greater responsibility to respond to Jesus’ call to unity and to being witnesses of reconciliation.

“We live in very difficult times,” Cardinal Marx told reporters later. Christians must find a common way of reacting and witnessing to the Gospel, asking themselves whether they should use “a language of division, of dominance, of hate, of confrontation, or should it be a language of dialogue, of understanding, of goodwill?”

“We know where we have to stand,” the cardinal said.

“We have to be convincing as witnesses for Christ and for love,” Bishop Bedford-Strohm said. “Therefore, we have to be witnesses of reconciliation in a Europe where we have so many divisions, so much hate.”

The bishop also told reporters that on behalf of the evangelical churches, he formally invited Pope Francis to Germany “whenever he wants.”

“He was very positive” about the invitation, the cardinal said. “I hope he can find the time.”