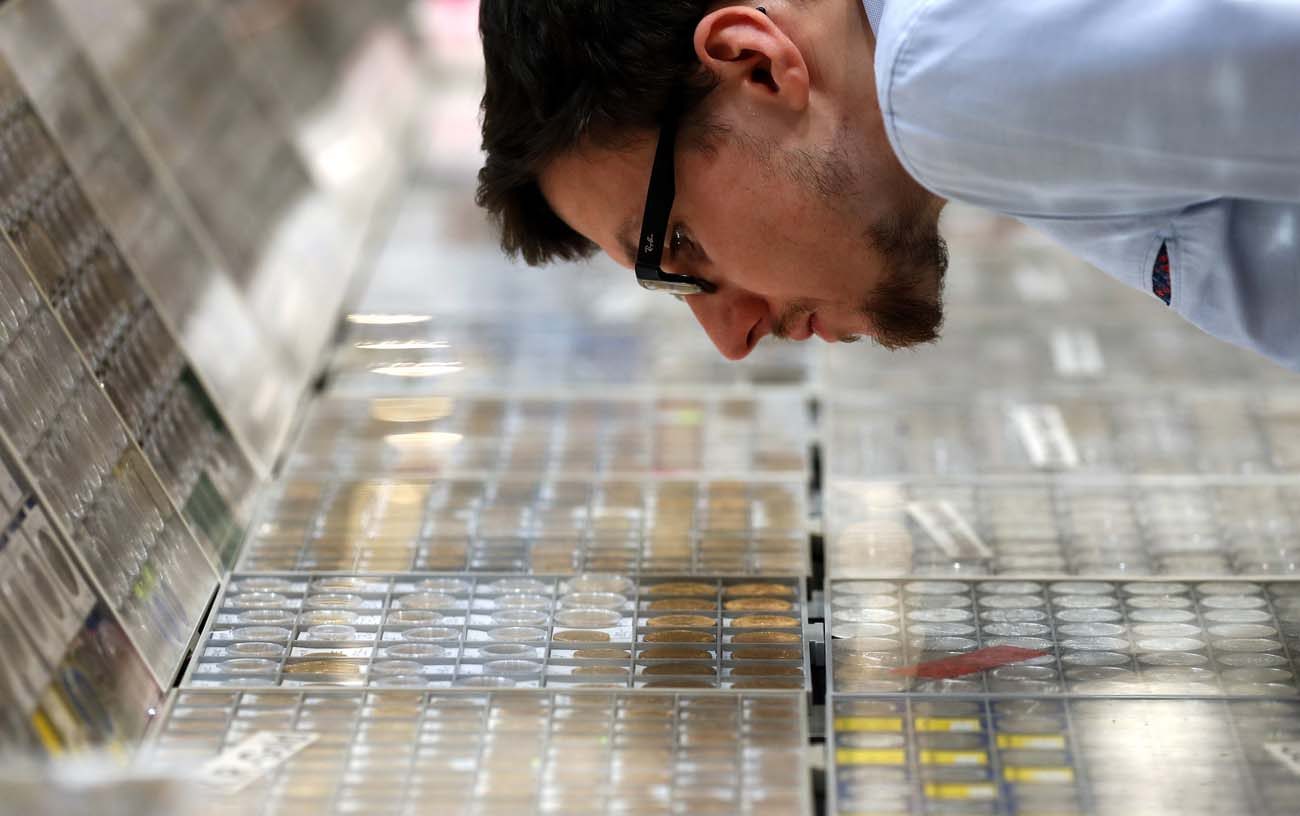 A man examines coins displayed at the World Money Fair in Berlin Feb. 3. Pope Francis wrote in his Feb. 7 Lenten message that money can chain people to a selfish logic that leaves no room for love and hinders peace. (CNS photo/Felipe Trueba, EPA)

VATICAN CITY (CNS) — Without making room for God’s word in their heart, people will never be able to welcome and love all human life, Pope Francis said.

“Each life that we encounter is a gift deserving acceptance, respect and love,” the pope said in his message for Lent, which begins March 1 for Latin-rite Catholics.

“The word of God helps us to open our eyes to welcome and love life, especially when it is weak and vulnerable,” he wrote.

Released by the Vatican Feb. 7, the text of the pope’s Lenten message — titled “The Word is a gift. Other persons are gift” — focused on the parable of the rich man and Lazarus in the Gospel of St. Luke (16:19-31).

The parable calls for sincere conversion, the pope said, and it “provides a key to understanding what we need to do in order to attain true happiness and eternal life.”

In the Gospel account, Lazarus and his suffering are described in great detail. While he is “practically invisible to the rich man,” the Gospel gives him a name and a face, upholding him as worthy, as “a gift, a priceless treasure, a human being whom God loves and cares for, despite his concrete condition as an outcast,” the pope wrote.

The parable shows that “a right relationship with people consists in gratefully recognizing their value,” he said. “A poor person at the door of the rich is not a nuisance, but a summons to conversion and to change.”

But in order to understand how to open one’s heart and see the other as gift, a person must see how the word of God operates.

One way to do that, he said, is to be aware of the temptations and traps the rich man fell victim to, derailing his search for true happiness.

The nameless “rich man” lives an opulent, ostentatious life, the pope wrote, and his love of money leads to vanity and pride — “the lowest rung of this moral degradation.”

“The rich man dresses like a king and acts like a god, forgetting that he is merely mortal,” he said. “For those corrupted by love of riches, nothing exists beyond their own ego. Those around them do not come into their line of sight. The result of attachment to money is a sort of blindness. The rich man does not see the poor man who is starving, hurting, lying at his door.”

Love of money, St. Paul warned, “is the root of all evils,” and the pope said, it is also “the main cause of corruption and a source of envy, strife and suspicion.”

“Instead of being an instrument at our service for doing good and showing solidarity toward others, money can chain us and the entire world to a selfish logic that leaves no room for love and hinders peace,” he added.

The rich man’s eyes are finally opened after he and Lazarus are dead; Lazarus finds comfort in heaven and the rich man finds torment in “the netherworld,” because, as Abraham explains, “a kind of fairness is restored” in the afterlife and “life’s evils are balanced by good,” the pope said.

The rich man then asks for an extraordinary sign — Lazarus coming back from the dead — to be given to his family members so they will repent and not make the same mistake as he.

But, Abraham said the people have plenty of teachings with “Moses and the prophets. Let them listen to them,” the pope said.

This explains what the real problem is for the rich man’s and those like him: “At the root of all his ills was the failure to heed God’s word. As a result, he no longer loved God and grew to despise his neighbor,” the pope said.

The pope asked that Lent be a time “for renewing our encounter with Christ, living in his word, in the sacraments and in our neighbor.”

“May the Holy Spirit lead us on a true journey of conversion, so that we can rediscover the gift of God’s word, be purified of the sin that blinds us and serve Christ present in our brothers and sisters in need,” he said, especially by taking part in the various Lenten campaigns sponsored by local churches.

NEXT: God loves all his children, even the ‘homely,’ pope says at Mass