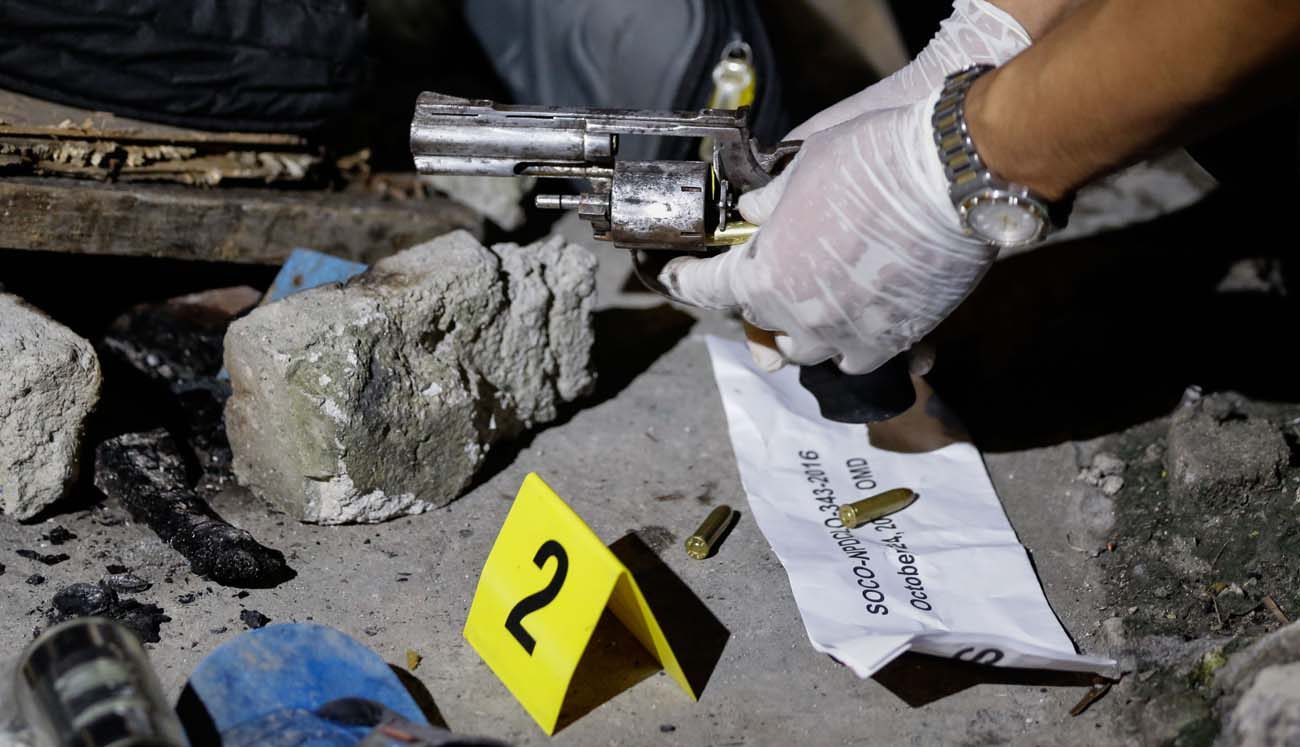 A Philippine crime scene investigator inspects a gun used in a 2016 murder in Novaliches. A Philippine cardinal has urged the faithful of his country to tell their lawmakers that the death penalty does not deter violent crime, could potentially legitimize violence and that life is a gift from God. (CNS photo/Mark A. Cristino, EPA)

MANILA, Philippines (CNS) — A Philippine cardinal has urged the faithful of his country to tell their lawmakers that the death penalty does not deter violent crime, could potentially legitimize violence and that life is a gift from God.

In a letter addressed to Catholics of the Manila Archdiocese as the Philippine Congress was discussing revival of the death penalty, Manila Cardinal Luis Antonio Tagle referred to what research worldwide has shown.

“The death penalty has not reduced crime because it does not solve criminality from its roots,” he said. “To help solve these roots of criminality, the church and the state need to protect and strengthen the basic unit of society, which is the family.”

The cardinal said the roots of crime include the loss of moral values, injustice, inequality and poverty among numerous other factors.

Throughout its history, the Philippines has imposed and suspended the death penalty, and the church has consistently opposed it. A 2006 law prohibits imposition of the death penalty, but since President Rodrigo Duterte took office at the end of June, his allies in Congress have been pushing for reinstating it.

In September, the president of the Philippine bishops’ conference urged Catholic lawmakers not to support the measure and called on Catholic lawyers to “study the issue and oppose” it in court.

Duterte has said on several occasions he is not interested in having the death penalty as a deterrent, but it should be a way to make criminals pay for what they have done.

Cardinal Tagle warned that this kind of thinking could legitimize the use of violence against wrongdoing and possibly place an innocent person at risk.

“Penalties are not imposed for vengeance but for the correction of offenders and the good of society,” the cardinal said. “A culture of violence dehumanizes. A culture of justice, integrity, and hope heals.”

Prior to being elected, Duterte ran on a campaign of cleaning up criminality, sending strong warnings to criminals that he would kill them. He also encouraged the public to do the same.

When he started his six-year term, Duterte mounted a major anti-drug operation against dealers and addicts across the country. He also made a pitch for reinstating the death penalty to speed up the cleansing of their ranks.

Since July, more than 7,000 people have been killed as a result of police anti-drug operations and vigilante killings carried out by ordinary citizens. Most of the victims come from the country’s poorest populations.

Amnesty International released a report in late January based on an investigation of nearly 5 dozen killings in the anti-drug campaign and said they constitute crimes against humanity.

PREVIOUS: Knights of Malta to continue focus on the poor, grand chancellor says

NEXT: South African Jesuits shocked at actions that led to 94 patient deaths