Knights of Malta to continue focus on the poor, grand chancellor says 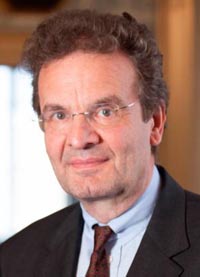 Albrecht Freiherr von Boeselager, pictured in May 2014. (CNS photo/courtesy of Knights of Malta)

ROME (CNS) — The newly reinstated grand chancellor of the Sovereign Military Order of Malta said the crisis that led to the resignation of the order’s grand master will remain a footnote in history that pales in comparison to the suffering of refugees and the poor.

Speaking at a news conference Feb. 2, Albrecht von Boeselager, grand chancellor of the order, said that while recent events have shown that “we are not immune to crisis in our government,” the Knights of Malta will continue placing their priority on helping migrants, the poor and the marginalized.

“This crisis will be a marginal event in history. What is more at stake is the crisis we are facing in the world and the misery and the plea of the millions of people (who are) homeless, migrating and fleeing,” he said.

The German nobleman’s removal by former Grand Master Fra Matthew Festing was at the heart of a public dispute between the order and the Vatican.

In a statement in December, the order said Boeselager was removed “due to severe problems which occurred during Boeselager’s tenure as grand hospitaller of the Order of Malta and his subsequent concealment of these problems from the Grand Magistry.”

Although the order claimed Boeselager’s ousting was an act of sovereignty, its constitution states that members take a vow of obedience to the pope who yields authority over the laity and clergy “as well as immediate authority over religious orders.”

After weeks of very public tensions with the Vatican, Festing offered his resignation Jan. 24 at the behest of Pope Francis, who had established a commission to investigate his removal of von Boeselager.

Von Boeselager was subsequently reinstated as grand chancellor of the order and the pope said he would appoint a special delegate who will “specifically take care of the spiritual and moral renewal of the order,” especially the 50 or so members who have taken religious vows of poverty, chastity and obedience.

The grand chancellor said he was grateful for the pope’s help in resolving the crisis.

Dominique de La Rochefoucauld-Montbel, current grand hospitaller of the order, said the crisis “has been troublesome for our donors,” many of whom “decided maybe not to help us anymore because they thought we were fighting against the pope, which is not true.”

“So now we have to restore this trust,” he said.

“We firmly condemn discriminatory policies” against migrants and refugees, he said, “and call for a strong reaffirmation of humanitarian laws. We are alarmed and concerned by the proliferation of discriminatory positions toward immigrants based on their national origins.”

When asked if he was referring to the recent executive order on refugees by U.S. President Donald Trump, von Boeselager said that he “made a statement of principle” and that there are “many countries, many institutions that are violating humanitarian principles.”

“I am not singling out anyone. It’s a principle of the Order of Malta,” he said.

“People are drowning in the Mediterranean; tortured on their way. Please don’t forget to report about these cases and fight the arrogant ignorance regarding this crisis,” von Boeselager said.