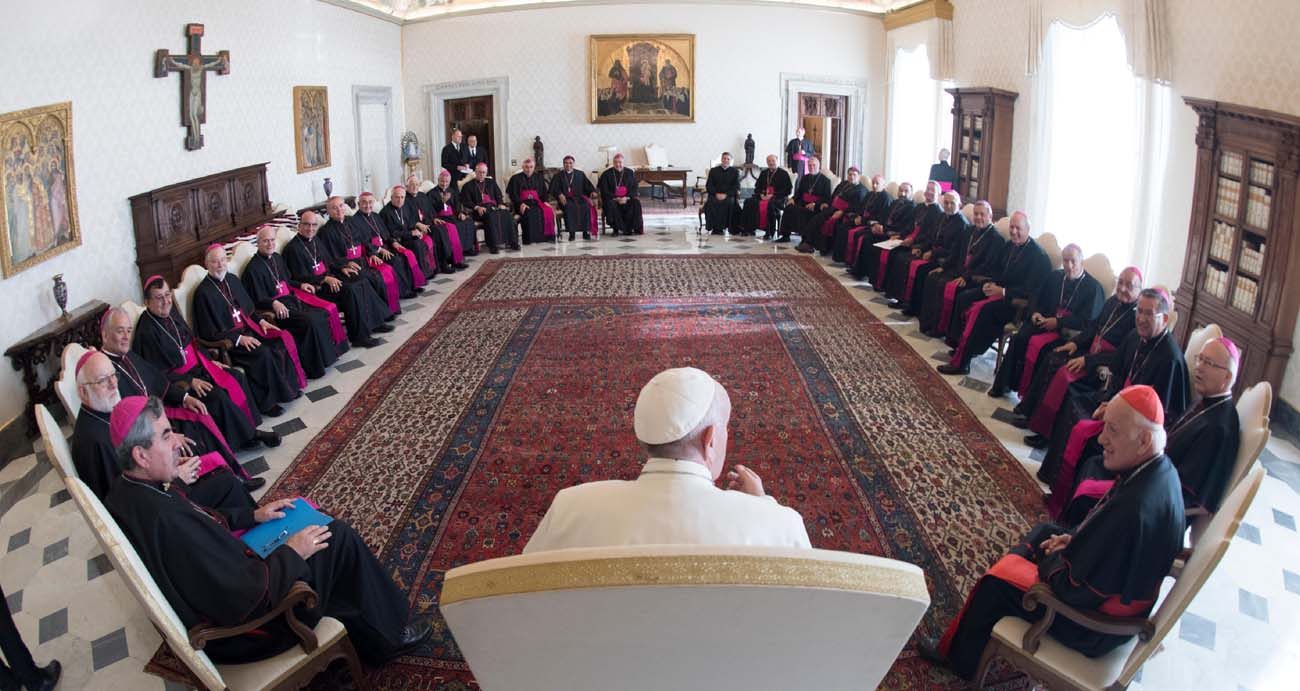 Pope Francis meets with bishops from Chile during their "ad limina" visits to the Vatican Feb. 20. (CNS photo/L'Osservatore Romano)

VATICAN CITY (CNS) — Pope Francis spent nearly three hours with the bishops of Chile discussing several key issues they are facing, including fighting pedophilia and evangelizing the marginalized and the suffering.

Meeting with 30 prelates from the Latin American country, the pope also spoke to them about reaching out to youth in an increasingly secularized society, the difficulties facing priests and a possible papal trip, Cardinal Ricardo Ezzati of Santiago said Feb. 20.

“The pope wants to visit Chile, he wants to confirm the faith of the church in Chile and to pay homage through closeness and attention to the Chilean people,” the cardinal said in a statement released after the meeting.

Taking part in the “ad limina” visits bishops are required to make to the Vatican, Cardinal Ezzati said that “no subject remained outside” of the discussions with the pope, but there was a special focus on evangelizing to those who are secularized and far from the church.

In an interview with Vatican Radio, Cardinal Ezzati said the pope focused particularly on the need for the church to listen to young people.

“The pope spoke to us about the ‘apostolate of the ear,’ of walking with them while listening and announcing the newness of Jesus Christ,” he said.

As in many countries, the church in Chile has been forced to deal with the issue of clergy sex abuse and, particularly, with accusations of inaction by the local hierarchy.

Cardinal Ezzati said the pope urged the bishops to be “attentive” to cases of abuse, which “are grave failings regarding human rights as well as a grave sin before God.”

The pope also recalled the anger caused by the sex abuse scandals in his native Argentina, particularly of parents participating in a protest outside of the metropolitan cathedral in Buenos Aires, the cardinal said.

“These parents shouted at their child saying: ‘Get away from there; there are pedophiles.’ The pope was upset but now he told us: ‘Look how far a mentality that sees evil everywhere can go!’ He invited us, then, to overcome this situation,” Cardinal Ezzati told Vatican Radio.

The bishops also discussed the challenges of evangelizing a “cultural environment” that is adverse to church teaching on sexuality and the family, including through abortion, same-sex marriage and gender theory.

“Deep down it is the denial of God” and his plan in creating human beings male and female, the cardinal said. The pope “told us very clearly that, without a doubt, it is a very serious issue of the current culture and that we are called to firmly denounce the evil that is behind this gender teaching.”

Although bishops on their “ad limina” visit usually have only one meeting with the pope, Cardinal Ezzati said in his statement that he, “together with the bishops of the country,” will have a second meeting with Pope Francis Feb. 23.