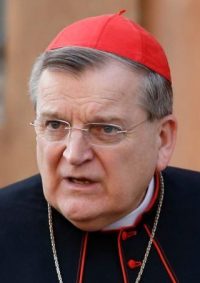 AGANA, Guam (CNS) — U.S. Cardinal Raymond L. Burke, accompanied by an official from the Congregation for the Doctrine of the Faith and three canon lawyers, spent two days in Guam interviewing witnesses and alleged victims in a clerical sexual abuse case against Archbishop Anthony S. Apuron of Agana.

The Archdiocese of Agana, in a Feb. 18 statement, said the cardinal and officials had left the island that morning after hearing testimony Feb. 16-17 “as part of the canonical penal trial” involving accusations against the archbishop.

“They conveyed their appreciation to all individuals whom they interviewed during their work here and encouraged all of Guam’s faithful to remain grounded in Christ,” the archdiocese said.

The Vatican press office had confirmed that Cardinal Burke was named presiding judge in the trial of the archbishop by the Congregation for the Doctrine of the Faith, which investigates and processes abuse claims against Catholic clergy.

In the Agana archdiocesan statement, Coadjutor Archbishop Michael J. Byrnes, a former auxiliary bishop of Detroit, expressed his satisfaction that the Vatican is advancing its investigation.

“The archdiocese commends all witnesses who have stepped forward to tell their stories. We will continue to redouble our efforts to combat, root out and address sex abuse in the archdiocese,” the statement said, adding, “We pray for a speedy and just result.”

In the meantime, the Archdiocese of Agana said it had completed child protection training at all Catholic schools on the island and the Task Force for the Protection of Minors had begun training staff and volunteers at the parish level.

During a news conference Feb. 10, Archbishop Byrnes had announced that the archdiocese voluntarily adopted the U.S. Conference of Catholic Bishops’ Charter for the Protection of Children and Young People. The charter calls for mandatory training of all adults entrusted with the care of children as well as mandatory audits.

PREVIOUS: Be ashamed when tempted to use church for power struggles, pope says