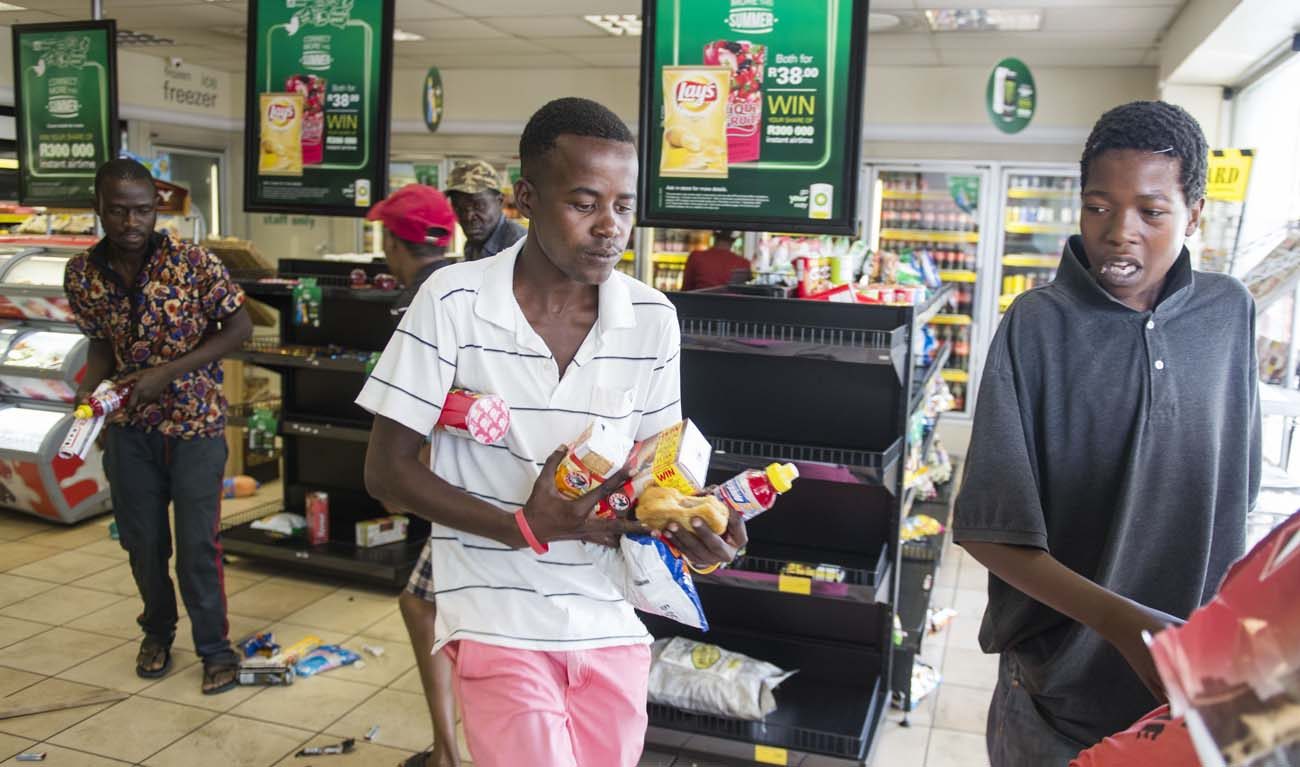 Protesters are seen looting a shop at a gas station in 2016 in Pretoria, South Africa. A South African Catholic commission urged restraint after a spate of xenophobic attacks in South Africa. (CNS photo/Herman Verwey, EPA)

“No grievance justifies the violence against foreign nationals,” Bishop Abel Gabuza of Kimberley, who chairs the commission, said in a statement Feb. 21.

More effective ways should be found to “detect and counter xenophobic violence before it flares up,” he said.

The church needs to strengthen its anti-xenophobia work in parishes across the country, Robert Mafinyori, a coordinator at the justice and peace department in Pretoria, said in a Feb. 21 telephone interview.

More than 30 shops belonging to immigrants were looted Feb. 20 in two neighborhoods in Pretoria, police said. This followed similar attacks in the city since mid-February, as well as the burning of houses and other property belonging to Nigerians in Johannesburg, by about 500 residents.

Anti-immigrant violence flares frequently in South Africa against a background of about 27 percent unemployment, with foreigners being accused of criminal activities and taking jobs from locals.

An estimated 5 million immigrants live in South Africa, which has a population of about 50 million.

If “the fierce competition for limited resources, public services and economic opportunities between foreigners and the unemployed poor in South Africa” is not addressed, the risk of xenophobic attacks will continue, Bishop Gabuza said.

Parish groups set up to counter xenophobia have been running successfully in Umzimkulu and Klerksdorp dioceses for more than a year, Mafinyori said. The groups include South Africans, foreign nationals and members of community police forums.

As well as holding regular meetings, the parish groups respond when concerns are raised that xenophobic violence “is about to flare up and take action to prevent this,” Mafinyori said. “They also discuss concerns such as competition for space” for small informal shops in townships.

With poverty levels high in South African townships, local residents with small informal businesses see competition “only at the level of immediate competitors,” such as immigrant shopkeepers, Mafinyori said, adding that big new supermarkets “are seen as bringing job opportunities and are welcomed.”

“With lives at stake, it is important to manage tempers and emotions,” he said.

In the parish groups, “building trust is crucial,” Mafinyori said, noting that with South Africans blaming immigrants for many of their problems, “mistrust among foreign nationals is huge.”

Many immigrants “fear that these structures are set up to expose them” for not having their documents in order, he said.

Participation of immigrants in church and other community groups, “as well as in day-to-day parish activities, will strengthen the sense of belonging in communities,” he said.

In the parish groups in Klerksdorp and Umzimkulu dioceses, “people start to see each other as neighbors and find that they have a lot in common with shared experiences,” Mafinyori said.

These structures are particularly important in hotspots of xenophobic violence, he said.

“It’s important that members of these groups view themselves as each other’s keeper so that they can move forward together,” he said.

On Feb. 20, the Nigerian government urged the African Union to help stop xenophobic attacks on its citizens and other Africans in South Africa.