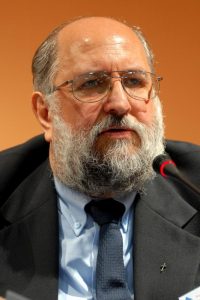 An internal investigation of Sodalitium Christianae Vitae found that Luis Fernando Figari, who founded the organization in 1971 and headed it until 2010, and three other high-ranking former members abused 19 minors and 10 adults.

The report, which Sodalitium posted on the internet Feb. 14, summarizes an investigation that included interviews with 245 victims and witnesses and with 17 current or former members accused of abuse.

The authors, who have been involved in investigations of sexual abuse of minors by priests in other countries, including Ireland and the United States, said they considered the accounts of abuse credible, but the report was not meant to be a formal finding under criminal or canon law.

In a video posted on YouTube Feb. 13, Alessandro Moroni, superior general of Sodalitium, said the report described a “sad and painful” situation and that the information would be submitted to Peruvian judicial authorities.

The report was released two weeks after the Vatican informed Moroni that it had ordered Figari, who has been living in seclusion in Rome, to remain there and not to have any contact with the organization or give interviews to the media.

In the Jan. 30 letter, Cardinal Joao Braz de Aviz, prefect of the Congregation for Institutes of Consecrated Life and Societies of Apostolic Life, said there was evidence that Figari had sexually abused a minor in 1974. In other cases, there was insufficient evidence of violence or the young people involved had not resisted or reported the act, the letter said.

The Vatican’s decision about Figari was based on his age and health, the fact that the abuse cases had occurred “in the distant past” and were not reported until years later, and steps taken recently by Sodalitium to address abuse, the letter said.

At a news conference in Lima Feb. 15, two of the most outspoken former Sodalitium members said neither the Vatican’s measures nor the investigators’ report and recommendations went far enough.

Most of the abuse cases occurred between the 1970s and 2000. Besides Figari, the report released by Moroni named German Doig Klinge, former Sodalitium vicar who died in 2001; Virgilio Levaggi Vega, who left the group in 1987; and Jeffrey Daniels, who has been named by at least 12 victims, and who now lives in the United States.

Another member, Daniel Murguia Ward, was expelled from Sodalitium after his arrest in 2007 when he was caught photographing a naked minor. He spent three years in prison but was eventually acquitted by a Peruvian court.

The report also mentioned three other current Sodalitium members and one former member who were accused of abuse of adults, but did not name them.

The investigation corroborated accusations made in a book published last year by two Peruvian journalists, Pedro Salinas and Paola Ugaz, which detailed psychological and sexual abuse, as well as corporal punishment and extreme exercise in which young members of the organization were forced to participate.

Salinas is a former member of Sodalitium. He and four other former members filed a legal complaint against the organization in 2016, but a public prosecutor shelved it in January on the grounds that no victims of sexual abuse had appeared to testify and that, even if sexual abuse had occurred, the statute of limitations had run out.

At a news conference Feb. 15, Jose Enrique Escardo, a former Sodalitium member who in 2000 was the first to speak out publicly about the abuse he suffered, said that if the report on the group’s internal investigation had been presented a few weeks earlier, the prosecutor might have investigated the case instead of throwing it out.

At that news conference, Salinas criticized the Vatican for allowing Figari to remain a member of Sodalitium, and Escardo questioned the organization for allowing people who had been trained to form younger members under Figari’s leadership to remain in that role.

Congressman Alberto de Belaunde said at the news conference that a group of national legislators was seeking a congressional investigation of Sodalitium in Peru.

A 2016 report by an internal Sodalitium ethics commission painted Figaro as an abusive dictator who controlled and manipulated teens and young adults, enjoying a life of “personal privilege” while forcing rigorous austerity on others.

He decided what studies the members would pursue, which members would remain lay and which had a religious vocation, sometimes claiming to see the image of Mary, a flaming sword or the Sodalitium symbol in their eyes, the report said.

Those closest to Figari either did not question him or participated in the abuses, according to the report.

“Although these events were reported within SCV, the superiors at the time did not adopt corrective measures and, on the contrary, they covered them up, thus encouraging the practice of new and greater abuses, under a mantle of impunity,” the report said.

The ethics committee called for “public repudiation” of Figari’s behavior and immediate assistance to abuse victims. It also urged the Vatican to sanction Figari and place Sodalitium under the leadership of “people from outside its current organizational structure.”

The ethics committee recommended that people who had held leadership positions in Sodalitium “during the years when the reported abuses were allowed” should be barred from holding “any representative position in the organization.”

After the ethics committee report was released, the Vatican named Cardinal Joseph Tobin of Newark as apostolic delegate to oversee Sodalitium.

The new report released by Moroni Feb. 14 described a series of steps that Sodalitium has taken to change the authoritarian rule imposed by Figari and prevent further abuse.

PREVIOUS: After years in war zone, burnout rises among those who serve Syrians