All Catholics must take faith, witness to the public square, bishop says 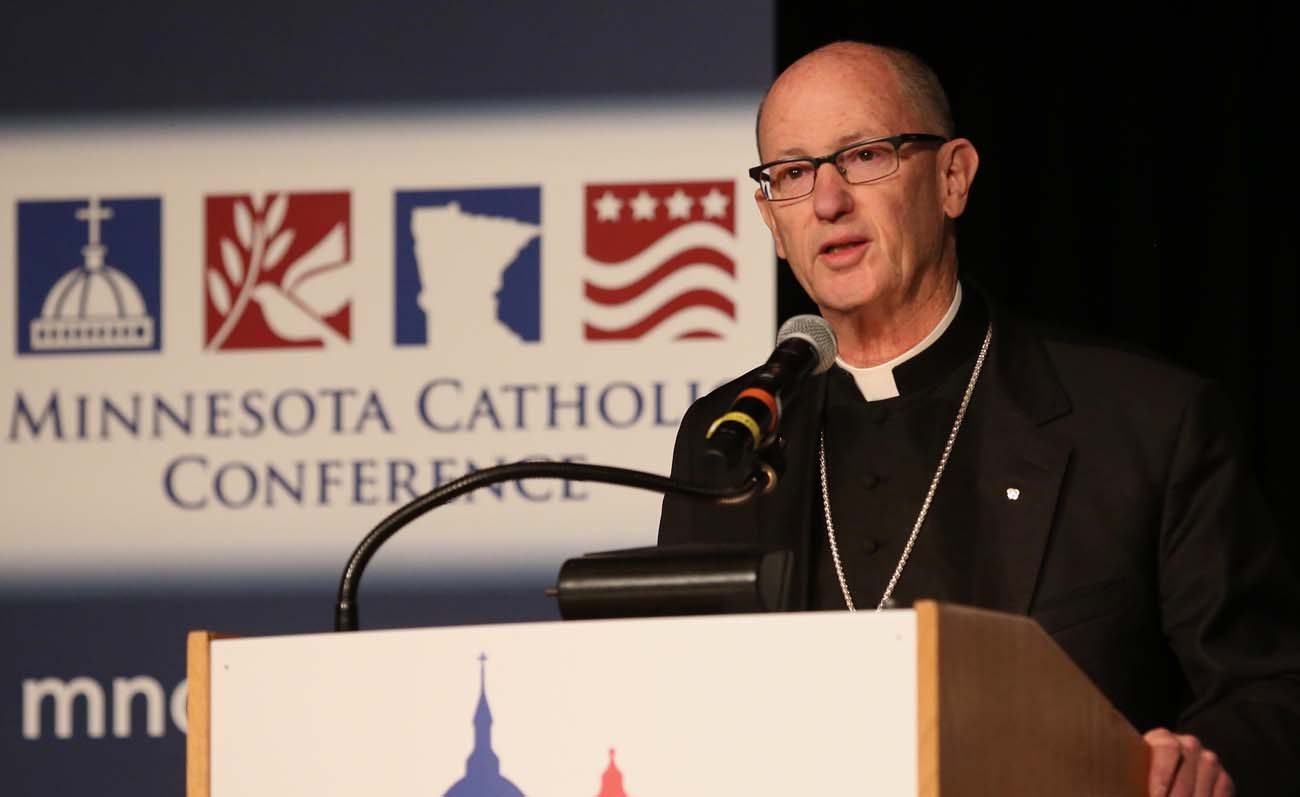 Bishop James D. Conley of Lincoln, Neb., is pictured in this March 9, 2017, photo at Catholics at the Capitol in St. Paul, Minn., sponsored by the Minnesota Catholic Conference. (CNS photo/Dave Hrbacek, The Catholic Spirit)

ST. PAUL, Minn. (CNS) — In his famous work “Democracy in America,” published in 1831, Alexis de Tocqueville wrote: “Where education and freedom are the children of morality and religion … democracy … makes better choices than anywhere else.

Bishop James D. Conley of Lincoln, Nebraska, made the case March 9 that those words remain true nearly two centuries later, and that Catholics need to engage in the public square.

He made the comments in an address to more than 1,000 Catholics gathered for Minnesota’s first Catholics at the Capitol event.

Organized by the Minnesota Catholic Conference, the education and advocacy event drew Catholics from every region of the state.

“Those two streets on which the Capitol stands,” he said, “should remind us of two fundamental and important truths: that democracies depend on believers to witness prophetically to virtue, to truth, to goodness and to beauty; that believers have a critical and important role to play in the public life for the common good, to build a culture of life and a civilization of love; and we must do all of this as … missionary disciples of Jesus Christ. Your state needs your faith and your witness.”

He told Catholics that democracy’s success depends on the “generous participation of believers.”

“Secular activists argue that our faith should stay out of the public square, that debates over public policy shouldn’t involve religious perspectives, (and) that we have no right to bring faith into the voting booth, or into the Capitol, or into the media,” he said.

But, he said, America’s Founding Fathers saw things differently. “The Founding Fathers believed that well-formed believers were essential and critical for maintaining the social contract underlying the U.S. Constitution,” he said.

He pointed to the words of President John Adams, written in 1798 to soldiers of Massachusetts: “Our Constitution was made only for a moral and religious people. It is wholly inadequate to the government of any other.”

“Public religious faith provides the ability to make moral judgments, which are rooted in a sense of common good rather than the individual good or personal gain,” Bishop Conley said.

He said in the first part of the 20th century, Catholics were observed to have kept their faith out of their political engagement, as they viewed it as a private or family matter “with no political implications.”

He said that our faith upholds a vision of the common good under which all people can flourish.

“The Gospel calls the world to objective standards of truth,” Bishop Conley said. “The Gospel promotes human dignity and protects the family and orders justice. Jesus Christ tells us what freedom is, what justice is, what it means to have peace and what it means to prosper. The Founding Fathers knew that the American Experiment would depend on the public faith of religious believers, and they knew that democracy itself depends on people of faith.”

During the last election cycle, many American Catholics considered themselves “politically homeless” because their values didn’t fit easily in either the Democratic or Republican parties. While it’s true that neither party represents a Catholic worldview, Catholics should not feel “homeless,” Bishop Conley said.

“Our political home is our eternal home, the city of God,” he said. “Because of that, our political mission in this world is to build a culture of life, a civilization of love.”

He said Catholics are meant to be prophetic voices who speak the word of God and trust in its power. He quoted G.K. Chesterton: “When the world is upside down, prophets are the ones who stand on their heads to see things as they are.”

“Today, in a world that is upside down, God calls us to stand on our heads … to see things as they are and to speak the truth,” he said, pointing to abortion and other life issues, marriage, and the need to help people who are poor, immigrant, refugees or incarcerated.

Speaking truth might mean that Catholics lose friends, he said. “If we are faithful witnesses to the church’s teaching, we will make our neighbors from every political party unhappy and uncomfortable,” he said.

Catholics also need to trust in God’s providence, he said. Success is measured by fidelity, not results, and God may use people’s efforts in ways they may never see.

“The time in which we live is a very difficult one for Catholics and for our nation,” Bishop Conley said. “May we together work for the kingdom of God, for justice, for truth, for charity. May we do all of this as disciples of Jesus Christ and may we trust in the Lord, who calls us to be holy above all things, who has a plan for each one of us, and who knows how that plan will unfold in his glory, in the providence of eternity.”