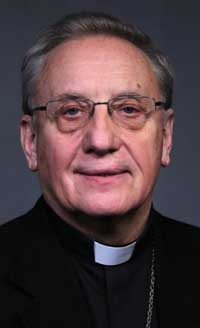 WASHINGTON (CNS) — People in Belarus — a former Soviet republic — have a great devotion to Our Lady of Fatima, and so does the archbishop who leads them.

Archbishop Tadeusz Kondrusiewicz of Minsk, Belarus, who served as archbishop of Moscow from 1991 to 2007, speaks passionately about his devotion to Our Lady of Fatima, who appeared to three children in Portugal in 1917.

“The idea of Fatima, the idea of the conversion of Russia — it’s in my heart,” he told Catholic News Service during a late-March visit to Washington.

“You will never find a church without a statue of Our Lady of Fatima in my country,” he added.

Archbishop Kondrusiewicz said he met three times with Carmelite Sister Lucia dos Santos, one of the three children who received the visions of Mary.

At the first meeting, in 1991, he told Sister Lucia that he was the Catholic archbishop in Moscow. “She asked several times, ‘Is it true?'”

“‘So,’ she said, ‘it means the prophecy of Fatima is fulfilled,'” Archbishop Kondrusiewicz said.

Part of the Fatima message — contained in a vision to Sister Lucia and her cousins — warned of the rise of communism, but also spoke of the ultimate triumph of the Immaculate Heart of Mary, especially in Russia if the country was consecrated to her Immaculate Heart. Although some Fatima devotees have debated whether the consecrations were carried out properly, Popes Pius XII, Paul VI and John Paul II each entrusted the world, and Russia in particular, to Mary. Archbishop Kondrusiewicz said Sister Lucia assured him that it was done correctly.

Archbishop Kondrusiewicz said Sister Lucia told him to work with the Orthodox, and she sent a statue of Our Lady of Fatima with him to give to Patriarch Alexei II of Moscow, who was patriarch of the Russian Orthodox Church at the time.

“Later, I saw the statue on his table several times,” the archbishop said.

In honor of the 100th anniversary of the first time Mary spoke of Russia in the apparitions, he said, two pilgrimages from Belarus will meet in Fatima July 13.

As far as Sister Lucia’s instructions to work with the Orthodox, the archbishop said the two churches applied to open counseling centers in abortion hospitals and received government permission.

“We saved a lot of lives,” he said, adding that the two churches along with some Protestant communities lobbied to change the Belarusian law to limit instances in which abortion is allowed.

Archbishop Kondrusiewicz told CNS that, as in other European countries, a growing secularism is threatening family life. He said about 50 percent of Belarusian couples are divorced and, unfortunately, Catholic couples are part of the statistic. The church is sending family consultations teams — psychologists, doctors, priests and nuns — to different parishes, “and people are coming,” he said.

During a large part of the 20th century, Belarus was under communist rule and there were no churches, the archbishop said, but parents taught their children to pray every day. Now there are churches, but many parents do not take their children to church after their first Communion at age 7 or 8.

The city of Minsk — with about 400,000 Catholics — has five churches, six chapels and seven churches under construction.

About 20 percent of the nation’s 500 priests are from other countries, and the head of the nation’s Religious Affairs Department is making it difficult for them to stay. The same government official has said that when the Council of European Bishops’ Conferences holds its plenary in Belarus in late September, participants must receive special permission to celebrate Mass in public.

Archbishop Kondrusiewicz was in the United States seeking support for a new Catholic business university. He said he often is invited to speak at secular universities about moral values and ethics. “Our society, they feel this necessity. They say, ‘Please come.'”

He said there is a university for sale in Minsk, with the potential to buy it on the condition that current students must be allowed to finish their course of studies. He is not sure such a university would succeed, “but we are trying to move stone.”

He also expressed thanks for all the support Catholics in United States and other Western countries gave former Soviet republics after the fall of communism. As a Catholic in the former Soviet Union, he said, he was only “able to dream about” things like reconstruction and renovation of churches.