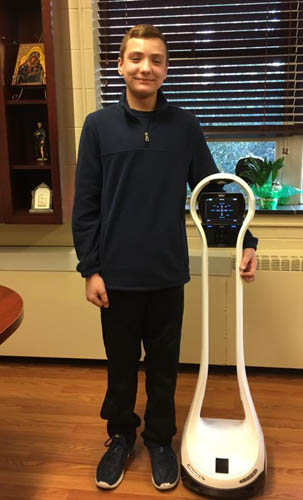 Tyler Knurek, a seventh-grader at St. Bartholomew School in East Brunswick, N.J., poses Feb. 6 with the VGo Robot that enables him to connect virtually with his class. (CNS photo/courtesy Veronica Tkacenko)

EAST BRUNSWICK, N.J. (CNS) — The school and parish community of St. Bartholomew in East Brunswick recently tested the saying, “ask and you shall receive.”

In January, they rallied together to raise more than $8,000 to buy a VGo Robot to enable Tyler Knurek, a seventh-grader with Hodgkin’s lymphoma, to connect virtually with his class and interact in real time while he remains at home for medical treatment.

Ann Wierzbicki, principal of St. Bartholomew School, said Tyler’s mother, Jackie, contacted her in January to ask whether the school could rent or buy the VGo Robot for him to use while he was out for the remainder of the school year. Jackie Knurek had learned about the robotic technology from a television news segment.

After some research and a meeting with the school’s information technology consultant, Wierzbicki said they created a plan to raise the money to buy the robot, which costs about $4,000 for a school.

“It was an extremely successful campaign,” she told The Catholic Spirit, newspaper of the Diocese of Metuchen. “We came up with more than enough money in less than two weeks.”

Tyler’s seventh-grade classmates created original prayer cards and wrote a personal prayer for his recovery. “Families can pray this prayer at home, and we also pray it together each morning as a school community,” Wierzbicki said. Tyler’s birthday was Jan. 18, so people were encouraged to donate $18 to the cause.

However, Wierzbicki said she received everything from kindergartners giving pennies to one school family donating $1,800.

“Several students spoke at Mass on the weekend and many parishioners donated, too,” she said. Every donor received a prayer card for Tyler.

Jackie Knurek said her son enjoys using the VGo to interact with his classmates and teachers.

“The interaction with people, especially those with whom he has created bonds with over time, is precious,” she said. “There has been an outpouring of support and love from his classmates, their families, the school, its teachers and administration that resonates with him that drives him to want to show he is fighting this illness and will overcome it.”

The transition of having Tyler as a “virtual student” has been smooth.

“The children are fascinated about the VGo Robot and how Tyler uses it,” said Josie Williams, one of Tyler’s teachers. “At times, Tyler does not show us his face and puts the sound on mute. The students respect that some days Tyler is not up to appearing live, although he is still following along.”

Williams added that Tyler can make his VGo nod and blink lights to indicate a “yes” or “no” response, and that he uses Skype to send her a message while she is teaching. “It is as if he is raising his hand to ask a question or make a comment,” she said.

In addition to keeping up with his academics, Tyler can socialize with his peers, something that is missing with traditional home tutoring.

Mark Brisson, the school’s IT consultant, said Tyler uses his finger on an iPad to control the robot. “Tyler picked it up instantly,” Brisson said. “Kids today love video games, and controlling the VGo is just like navigating a character in a Minecraft game.”

Brisson said Tyler drives the robot down the hall when they change classes or head to lunch, and that he could even attend a school event and cheer on his friends if he wanted. “It is like Tyler is really there,” he said.

Because St. Bartholomew has been working for the last 10 years on a long-range vision plan to upgrade all technology at the school, Brisson said, they could instantly bring the VGo into the classroom.

“We had the infrastructure in place,” he said. “As our pastor, Father Tom Walsh, likes to say — we have gone from the Flintstones to the Jetsons.”

Incorporating technology into a traditional curriculum is part of Brisson’s Catholic mission-driven business, Premier SMB Solutions. “In a situation like this,” he said, “technology is able to bring the joy, the love, the hope, and the compassion to the parish and school community. It is living … the Catholic way.”

About 2,000 VGo robots are being used around the country, including 500 in schools for students like Tyler, said Ned Semonite, vice president of products at Vecna Technologies, the Massachusetts-based company that makes the device.

Tyler’s classmates are happy to interact with him on a daily basis. “It is wonderful that Tyler is able to attend school with us,” said classmate Grace Brautigan. “While his immune system is weak during treatment, he can still be a part of our school family. This will help Tyler heal faster.”

“St. Bartholomew’s Catholic family is, without doubt, the best image of what Catholicism can be,” said Tyler’s mother. “The love and empathy everyone has given Tyler is beyond measure. … The school and community are his strongest support system..”

Jackie Knurek also praised Vecna Technologies for addressing “the issue of isolation and helplessness that occurs with a long-term illness.” With the robot, she said, “they have created an instance of humanity” allowing Tyler to continue to be part of “a beautiful community of people.”

“One day, Tyler hopes to be able to torch-light the way for others who fall into this path,” she added. “We have high hopes he will help others. He wants to honor those whom have made sacrifices for his recovery.”

Liston is a freelance reporter for The Catholic Spirit, newspaper of the Diocese of Metuchen.