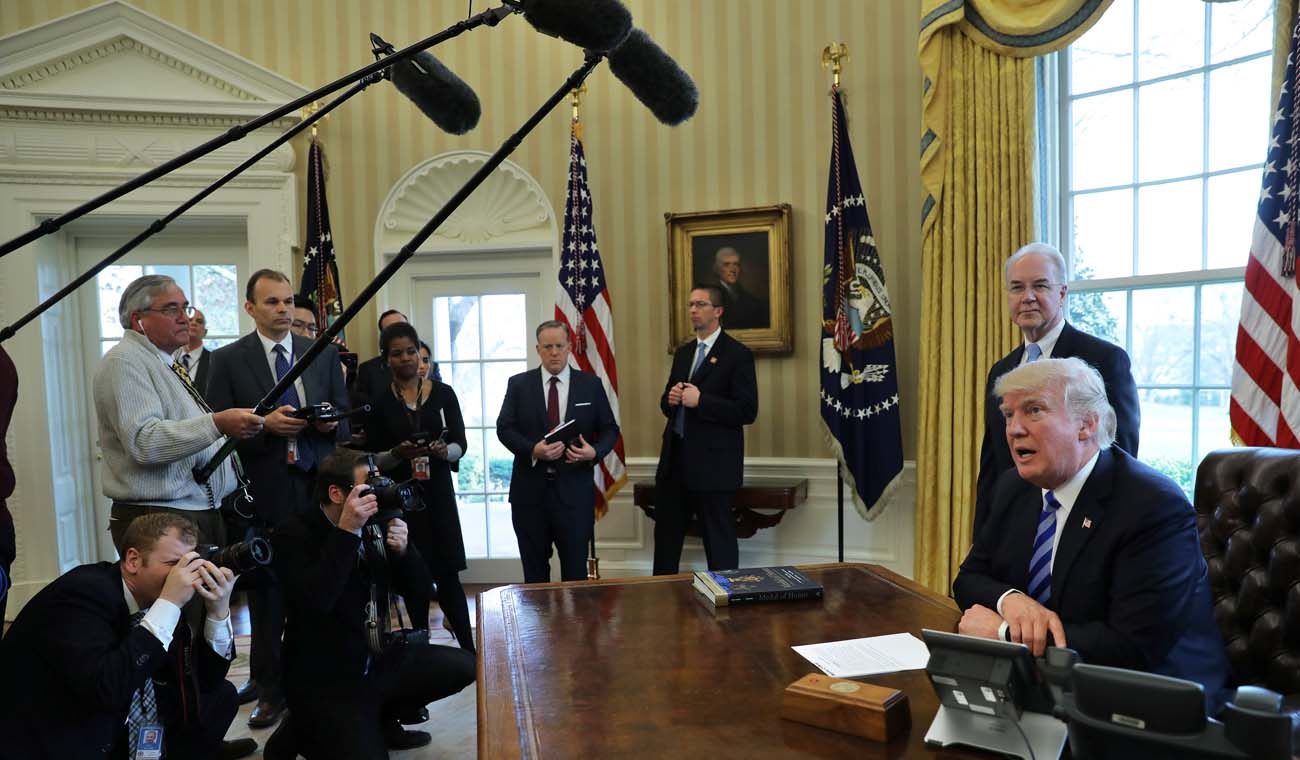 U.S. President Donald Trump talks to journalists in the Oval Office at the White House March 24 after the American Health Care Act was pulled before a vote. Now that lawmakers have withdrawn the bill, Congress must "seize this moment to create a new spirit of bipartisanship" and make "necessary reforms" in existing health care law to address access, affordability, life and conscience, said three U.S. bishops' committee chairmen. (CNS photo/Carlos Barria, Reuters)

The GOP bill was removed from consideration by the House at the eleventh hour March 24 because its passage looked unlikely, as a number of lawmakers disagreed with several of its provisions as well as the process that led to the drafting of the bill.

The measure “contained serious deficiencies, particularly in its changes to Medicaid, that would have impacted the poor and others most in need in unacceptable ways,” the bishops said in a joint letter to Congress dated March 30 and released March 31 by the U.S. Conference of Catholic Bishops.

But the committee chairmen also said that withdrawal of the bill “must not end our nation’s efforts to improve health care.”

The bishops stressed that a positive aspect to the proposed legislation was its “critical life protections for the unborn.”

“By restricting federal funding for abortion, its providers and the purchase of plans that cover it, the bill would have finally resolved a grave moral failing rooted within the very structure of the Affordable Care Act,” they said.

The letter also pointed out issues that still need to be addressed, such as conscience protections for those who participate in the delivery or coverage of health care services, problems of rising costs and premiums and the obstacles to immigrant access to health care.

“Lawmakers still have a duty to confront these significant challenges. While a comprehensive approach is preferable, some of the problems can be fixed with more narrow reforms, and in a bipartisan way,” the bishops said, suggesting that Congress pass the Conscience Protection Act, extend full Hyde Amendment protections to the Affordable Care Act, and enact other targeted laws to remove current and impending barriers to obtaining health care.

The 41-year-old Hyde Amendment, which has to be approved each year as part of the budget for the U.S. Department of Health and Human Services, prohibits tax dollars from paying for abortion except in cases of rape, incest or threat to the woman’s life. The Conscience Protection Act would provide legal protection to doctors, nurses, hospitals and all health care providers who choose not to provide abortions as part of their health care practice.

Sister Carol Keehan, a Daughter of Charity, who is president and CEO of the Catholic Health Association, said her organization is “pleased that the hastily crafted American Health Care Act did not garner enough support from congressional members for it to be approved in the House of Representatives.”

In a statement to be published in the April 15 issue of Catholic Health World, a CHA publication, Sister Keehan said the association remains “concerned about the continued affordability and stability of the individual health insurance market under the ACA.” She said she hopes Congress will work in a bipartisan way going forward to address those challenges, adding that it has “a perfect opportunity to do that now.”

Sister Keehan, who heads an organization of more than 600 hospitals and 1,400 long-term care and other health facilities in the United States, said “maintaining health care coverage is not a problem either party can solve alone at this point, but it is solvable with bipartisan efforts.”

“CHA is anxious to cooperate with President Donald Trump and Congress in working toward a solution that is better for everyone. We need to craft a solution that seeks the common good for all Americans,” she said.

In a March 17 letter to House members about the American Health Care Act, Bishop Dewane said the bill’s inclusion of “critical life protections” was laudable, but other provisions, including those related to Medicaid and tax credits, were troubling.

“The ACA is, by no means, a perfect law,” Bishop Dewane said. “The Catholic bishops of the United States registered serious objections at the time of its passage. However, in attempting to improve the deficiencies of the ACA, health care policy ought not create other unacceptable problems, particularly for those who struggle on the margins of our society.”

Main provisions of the shelved legislation included: eliminating the mandate that most individuals have health insurance and putting in its place a new system of tax credits; expanding Health Savings Accounts; repealing Medicaid expansion and transitioning to a “per capita allotment”; and prohibiting health insurers from denying coverage or charging more money to patients based on pre-existing conditions.

PREVIOUS: Pro-life advocates who made undercover videos charged with 15 felonies