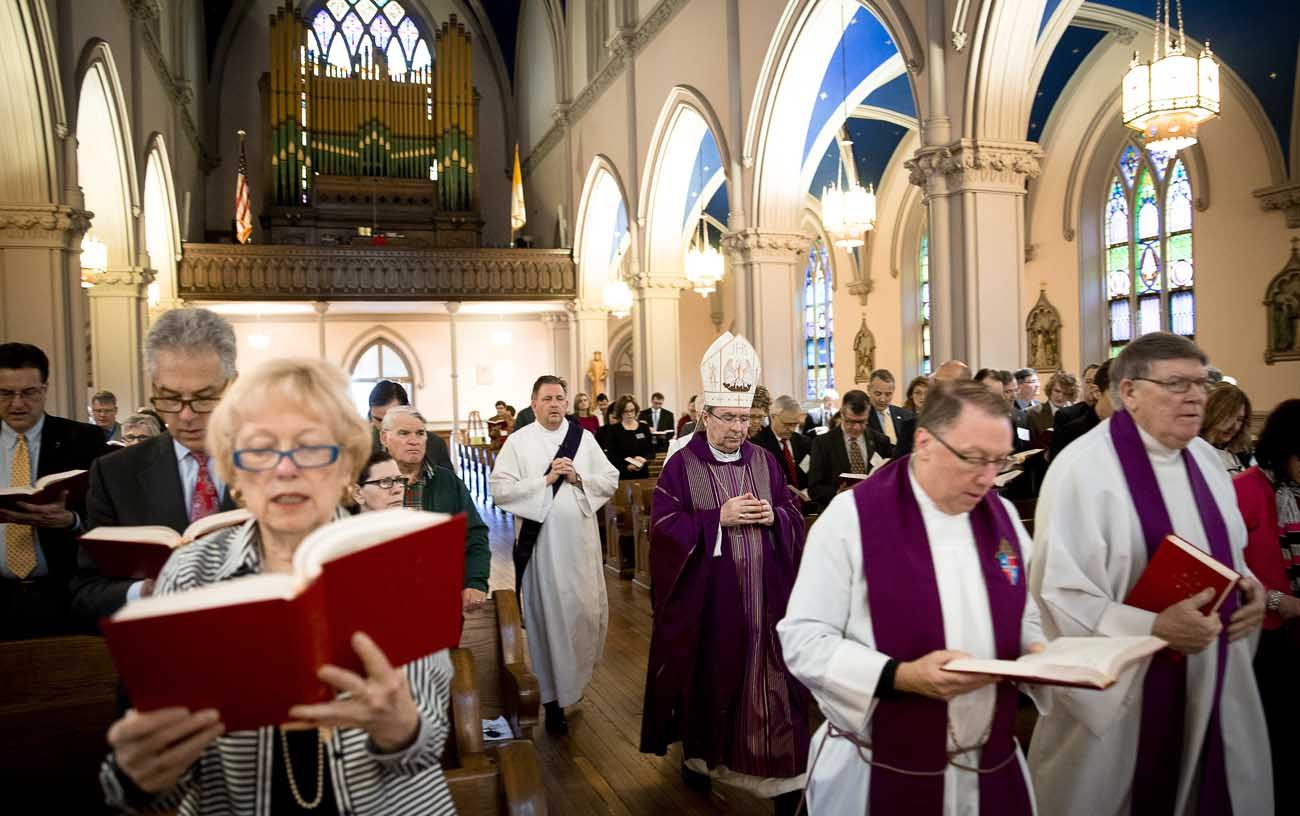 Archbishop Christophe Pierre, apostolic nuncio to the United States, is seen at St. Joseph Church on Capitol Hill in Washington March 29. The nuncio celebrated Mass with Catholic Charities leaders prior to the start of their "Hill Day" meetings with Congress. (CNS photo/Tyler Orsburn)

WASHINGTON (CNS) — Four years ago, Ted Bergh was asking members of Congress to support food programs and comprehensive immigration reform, issues of deep concern to Catholic Charities of Southwestern Ohio, which he serves as CEO.

Bergh was back on Capitol Hill March 29 for Catholic Charities USA’s Hill Day with the same concerns and a few more in a time of uncertainty under a new White House administration.

Catholic Charities leaders spent the second day of their two-day meeting pressing support for federally funded social services — in many cases their lifeblood — that touch the lives of the millions of people they serve. Their concerns encompassed affordable housing, protections for immigrants and refugees, services for senior citizens, and food programs in schools and rural communities — all in response to the deep cuts in social services proposed in President Donald Trump’s “skinny” budget.

The budget — a preliminary plan with specifics due in May — calls for $54 billion in cuts in discretionary spending in nonmilitary programs including many social services. The budget calls for a corresponding boost in military spending.

The proposed reapportioning of the federal budget did not sit well with Robert McCann, president and CEO of Catholic Charities Spokane in Washington state. He said he wanted to stress to Congress that a budget is a values-based document that answers the question, “What is most important to us?”

“In my mind, being able to solve homelessness in our country is more important than spending $582 billion on defense.” McCann said. “I’m a patriot and I want to defend America, but I also want to take care of the dignity of every human being. That they deserve a bed and a shower and a place to eat and place to have a normal life. We can solve homelessness in the country, but it’s going to take an intentional effort.”

Bergh and colleagues made similar pitches.

In the meeting, Bergh turned to the lack of affordable housing in Cincinnati and beyond. He and others pressed for affordable housing projects to be included in Trump’s call for $1 trillion in infrastructure improvements. It was an idea they said was mentioned during a private meeting with Ben Carson, secretary of the Department of Housing and Urban Development, the day before.

Bergh was backed by Laura Jordan Roesch, CEO of Catholic Charities Social Services of the Miami Valley in Dayton, Ohio, who said housing support for low-income families and immigrant communities in particular can help grow the economy.

Dayton, Roesch told CNS afterward, has undertaken a policy of welcoming immigrants in the wake of the loss of tens of thousands of manufacturing jobs. The newcomers have refurbished houses, opened business and created a burgeoning economy in the city’s Old North Dayton neighborhood, she said.

Across Capitol Hill, agency leaders repeated calls to protect the social safety net, fearing programs that benefit poor people were being targeted by the president’s budget proposal. The officials also made sure to point out that any change in the Affordable Care Act must ensure that people do not lose the health coverage they now have.

They cited examples from their communities of how low-income families are faced with spending an ever-growing percentage of their limited incomes for rent. Families especially have turned to Catholic Charities for rental assistance to avoid eviction and the resulting upheaval of family life.

Their point: Keeping people in a stable setting saves money in the long run because they are not having to turn to more costly emergency services. Stable housing reduces crime, drug abuse and school dropout rates, they said.

Terry Walsh, president and chief executive office of Catholic Charities Hawaii, said he wanted to respond to the “senior tsunami” affecting the state in which the senior population is rising at five times the rate of the rest of the country, stressing the affordable housing market on the islands.

“Per capita, Hawaii has the highest homeless rate in the country,” Walsh said. HUD in 2016 counted 7,921 people as homeless in Hawaii, whose population totals 1.4 million. “It’s going beyond the chronically homeless. It affects children. It affects seniors. It affects families,” he said.

In meetings with staff of the House and Senate committees on agriculture, Kim Brabits, vice president, program operations for Catholic Charities of Northeast Kansas, cited the need for strengthening food programs because of growing “food deserts” in rural areas of the 21 counties her agency serves. She said locally owned grocery stores in small towns and at crossroads have been forced to close as mega-supermarkets that are up to an hour away from some residents have opened.

“Our mission is to increase the summer meal programs,” Brabits said. “Cutting the program would be detrimental to the kids we serve.”

Brabits said meal programs are effective, despite what some government officials have said publicly. “We’re feeding people,” she said. “That’s the main goal: how many people are being fed.”

Funding for disaster response was on the mind of Sister Marjorie Hebert, a member of Marianites of the Holy Cross and president and CEO of Catholic Charities of the Archdiocese of New Orleans. Making her visit for Hill Day, she said the area had experienced weather-related disasters in the last year that forced people from their homes.

“We need to find a faster way to get the money to the recipients. FEMA (Federal Emergency Management Agency) is there quickly enough. We sometimes have to front money for almost nine to 12 months before we (the region) get the federal assistance,” she said.

Most importantly, she said, her visit to Congress was to serve as a reminder of the value of the front line services her agency provides and “the number of people we serve.”

NEXT: Bill passes to allow states to redirect funds away from abortion clinics