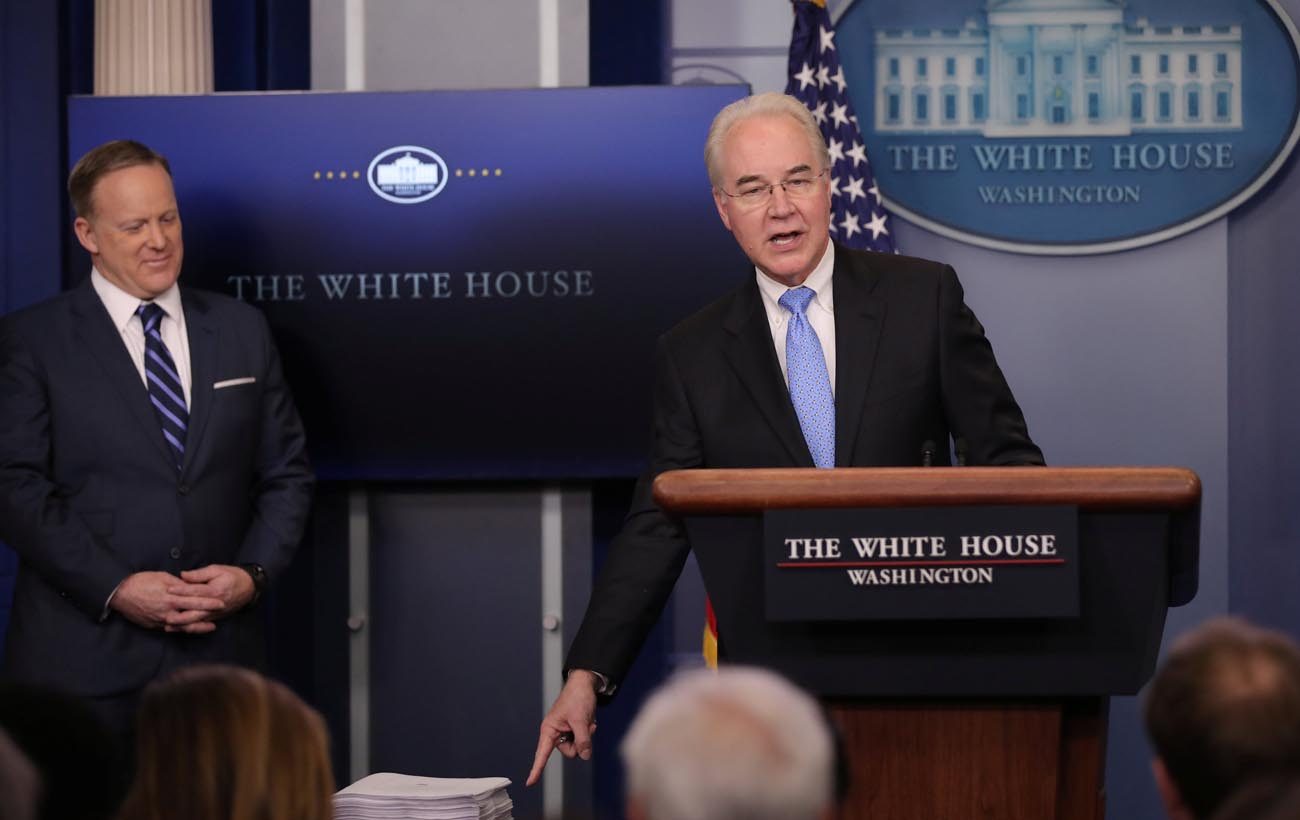 U.S. Health and Human Services Secretary Tom Price gestures at a stack of papers that he said was the Affordable Care Act during a March 7 press briefing as White House Press Secretary Sean Spicer looks on at the White House in Washington. The law, as passed in 2010, was 906 pages long. Republicans in the U.S. House have introduced a measure to repeal and replace the federal health care law. (CNS photo/Carlos Barria, Reuters)

UPDATED – WASHINGTON (CNS) — Calling health care “a vital concern for nearly every person in the country,” the U.S. Catholic bishops said March 8 they will be reviewing closely a measure introduced in the House March 6 to repeal and replace the Affordable Care Act.

“Discussions on health care reform have reached a level of intensity which is making open and fruitful dialogue difficult, even while most people recognize that improvements to the health care system are needed to ensure a life-giving and sustainable model for both the present and future,” said a letter to House members signed by the chairmen of four U.S. bishops’ committees.

“Given the magnitude and importance of the task before us, we call for a new spirit of cooperation for the sake of the common good,” they wrote.

Main provisions of the new House bill include: eliminating the mandate that most individuals have health insurance and putting in its place a new system of tax credits; expanding Health Savings Accounts; repealing Medicaid expansion and transitioning to a “per capita allotment”; and prohibiting health insurers from denying coverage or charging more money to patients based on pre-existing conditions.

It also eliminates any government subsidies, such as tax credits, for health plans that cover abortion (except in cases of rape, incest or to save the life of the mother); and blocking about $500 million in federal funding for Planned Parenthood, the nation’s largest single abortion provider.

The Catholic Health Association in a March 7 statement said it “strongly opposed” the House repeal and replace measure, saying it “asks the low-income and most vulnerable in our country to bear the brunt of the cuts to our health system.”

It pointed to the proposal to cap federal financing of Medicaid, which is a state-federal program; to eliminate cost-sharing subsidies for low-income people and create “barriers to initial and continuing Medicaid enrollment.”

CHA said the provision on pre-existing conditions would come with a 30 percent monthly premium surcharge for a year “should they have a lapse in coverage.” Its vision for health care in the U.S. “calls for health care to be available and accessible to everyone, paying special attention to poor and vulnerable individuals,” the CHA statement said.

In their letter, the Catholic bishops called on lawmakers to consider moral criteria as they debate the measure, including: respect for life and dignity; honoring conscience rights; access for all; a plan that is “truly affordable … comprehensive and high quality.”

The U.S. bishops “continue to reject the inclusion of abortion as part of a national health care benefit,” they said. “No health care reform plan should compel us or others to pay for the destruction of human life, whether through government funding or mandatory coverage of abortion.”

Hyde Amendment protections, they said, “must extend to any relevant health care plan in order to prevent federal funding of abortion, and federal resources — including tax credits — must not be used to assist consumers in the purchase of health care plans that cover abortion.” Such protections should not be “a temporary fix or future promise,” they said.

The 41-year-old Hyde Amendment, which has to be approved each year as part of the budget for the U.S. Department of Health and Human Services, prohibits tax dollars from paying for abortion except in cases of rape, incest or threat to the woman’s life.

The House Jan. 24 passed the No Taxpayer Funding for Abortion Act to make the amendment permanent. The Senate has not yet acted on the measure.

Regarding conscience rights, the committee chairmen said, “Congress should expressly provide conscience protections as part of any health care plan for those who participate in the delivery or coverage of health care services.”

They also said that “any modification of the Medicaid system as part of health care reform should prioritize improvement and access to quality care over cost savings.”

The U.S. Catholic Church, the bishops said, “remains committed to the ideals of universal and affordable health care, and to the pursuit of those ideals in a manner that honors” the moral criteria they outlined.

Health care is not just another issue, but a “fundamental issue of human life and dignity” and “a critical component of the Catholic Church’s ministry,” they added.

The U.S. bishops have advocated for universal and affordable health care for decades and they supported the general goal of the Affordable Care Act, which was passed in 2010, but the bishops ultimately opposed the law because it expanded the federal role in abortion and failed to expand health care protections to immigrants.

Sister Simone Campbell, a Sister of Social Service, who is executive director of the Catholic social lobby Network, said the new health care bill “must be rejected.”

“Our test for any ACA replacement bill is simple,” she said in a March 8 statement. “Does the bill protect access to quality, affordable, equitable health care for vulnerable communities? After reviewing the House GOP replacement bill, the answer is a resounding no.

“Instead of providing greater health security, the bill increases costs for older and sicker patients and drastically cuts the Medicaid program, all while providing huge tax cuts to wealthy corporations and individuals,” she continued. “This is not the faithful way forward and must be rejected.”

Catholic Charities USA sent a letter March 8 to Congress voicing its opposition to the new health care measure, signed by Dominican Sister Donna Markham, president and CEO of the organization. She noted “commendable efforts” in the bill including protection for the unborn and greater flexibility for the states.

But Sister Markham said the measure makes major reductions in health care for more than 70 million poor and vulnerable on Medicaid and said it “undermines access to life-saving health care coverage.”

“House leadership and those who drafted the American Health Care Act deserve high accolades for their efforts to make certain that any changes to the health care system do not encourage, subsidize or directly pay for abortions,” he said. “They also deserve praise for sticking to their commitment to eliminate Planned Parenthood, America’s largest abortion provider, from Medicaid reimbursements for one year.”

“This will redirect women to federally qualified health centers, which provide all of the health services American women need and outnumber Planned Parenthood clinics by a ratio of 20-to-1,” McClusky added.

NEXT: At a glance: GOP measure to repeal, replace Affordable Care Act