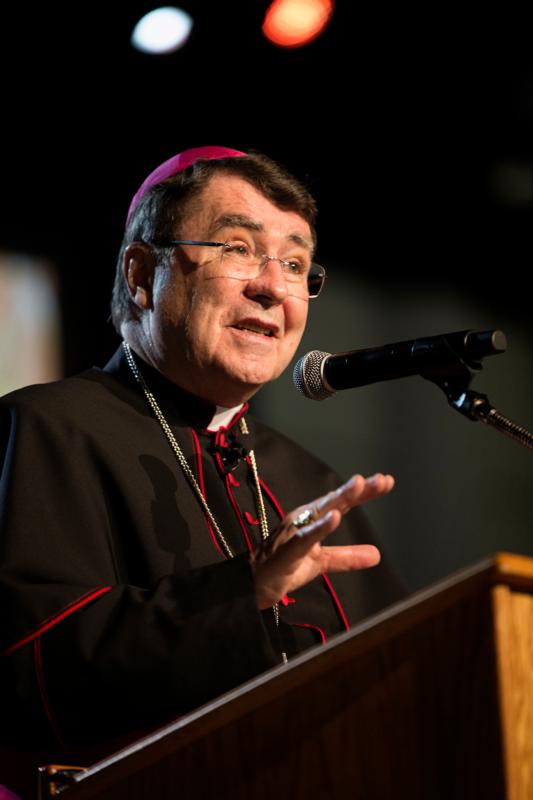 JACKSONVILLE, Fla. (CNS) — Drawing on the imagery of the empty jars at the wedding feast at Cana, Archbishop Christophe Pierre challenged Catholics at the 2017 Florida Eucharistic Congress to identify what is missing from their lives and ask Jesus to transform them as he did water to wine.

Archbishop Pierre, the apostolic nuncio to the United States, was the keynote speaker March 25 at the annual congress in Jacksonville, in the Diocese of St. Augustine. He addressed the congress theme, “Do Whatever He Tells You,” which was Mary’s instructions to the servants at the wedding feast.

“We learn from Mary to be attentive to the needs of others,” the archbishop said. “When we run out of wine, we risk losing the nuptial joy of life. From Mary, we learn to respond to the crises of our day.”

Archbishop Pierre said there is a strong connection between Mary and the Eucharist. “Her body is the place of the incarnation. In her body was born the body of Christ,” he said.

“She guarantees the reality of the incarnation. She gave him his human body and characteristics,” he said. “She provides us the assurance that Jesus is totally human and has a human nature in addition to his divine nature.”

At Mary’s request, Jesus performs his first public miracle at the wedding feast. “The disciples saw his glory and began believing in him,” Archbishop Pierre said.

Archbishop Pierre said Mary brings a woman’s sensibility to the occasion. Amid the noisy festivities, she is attentive to the needs of others.

“She is fully aware that Jesus can remedy the situation,” he said. Even when he responds, “Woman, what does this have to do with me? My hour has not come,” she is not deterred.

“Over the years, she has become an expert in Jesus. She knows how he works,” he said. “She knows she can go to him. She’s not afraid. She tells the servants, ‘Do whatever he tells you.’ And what does Jesus tell them? Fill the jars.”

The archbishop said the image of the six empty jars is a useful metaphor. “Every epoch has nights and the nights of our time are not few,” Archbishop Pierre said.

He listed six areas of emptiness he sees in modern life: lack of joy; lack of giving; lack of memory; lack of prophecy; lack of beauty; and lack of silence.

As he addressed each area, he asked a group of six people to pour water into a jar. The first group was led by Bishop Felipe J. Estevez of St. Augustine.

“There is sadness, an inability to celebrate that pervades our culture. It is a modern sickness,” Archbishop Pierre said. “Bitterness dominates people’s private, social, political and cultural lives. Cynicism has set in and people are no longer disposed to joy.”

Culture values people for what they do and have rather than who they are as individuals, he said.

“How are we to remedy this? The Eucharist is the sacrament that acknowledges Christian joy, the victory over sin. It is a foretaste of the heavenly banquet,” he said. “We are to fill the jar with eucharistic joy.”

The second jar represents the lack of giving, the increasing selfishness in today’s world, he said. The wealthiest 20 percent of the world consumes 76 percent of the world’s resources. To fill the empty jar, the culture of consumption and individualism must be challenged and a new spirit of generosity cultivated.

The third jar represents lack of memory, the loss of connection with the past.

“Modern man lives in the present moment and risks losing the collective wisdom of our ancestors,” he said. “In Christianity, the past is our destiny. God acts in history. Salvation began in historical events. Jesus tells us, ‘Do this in memory of me.’ The Eucharist is the sacrament of memory.”

The fourth jar represents the loss of prophecy. “The world has been unable to provide satisfying answers to our deepest questions. Our culture has become a moral and spiritual desert, but God still comes to us even in desert and leads us to the Promised Land,” he said. “We can fill the jar by recovering a sense of the mission of evangelization and repossessing the wealth of the church’s spiritual tradition.”

The fifth jar represents the lack of beauty, the dominance of brutality and brokenness. Modern life is characterized by a lack of harmony, by moral and ethical relativism, excess in the consumption of goods, immoderate speech and dress, he said.

“In contrast, Mary reminds us by her presence of beauty, the beauty of God’s grace at work in her. She attracts us with the beauty of holiness,” he said. “To fill the jar we must commit to holiness. Committing ourselves to the truth in Jesus Christ will help restore beauty.”

The sixth jar represents the lack of silence. “We live in a culture of noise. Lack of silence threatens our culture. We talk past each other. We are unable to listen and communicate deeply. Without silence it becomes increasingly difficult to develop a spiritual life, especially when God speaks in a whisper,” the archbishop said.

“To fill the jar, we must commit ourselves to building a culture of silence. Guarding our speech from profanity, hurtful words, gossip, and idle chatter. Saying only good things people need to hear. A culture of silence allows us to be open to the Holy Spirit,” he said. “Mary gives us the example keeping silent and hearing the voice of God. Only after listening can we act.”

Archbishop Pierre called on Catholics to fill the jars every day and to be open to Christ’s miraculous power to transform whatever is put in them.

“We cannot perform a miracle, but we can do our part. We can fill the jars,” he said. “With faith and humility, we recognize the lordship of Jesus and our responsibility as believers and watch as the water becomes wine.”