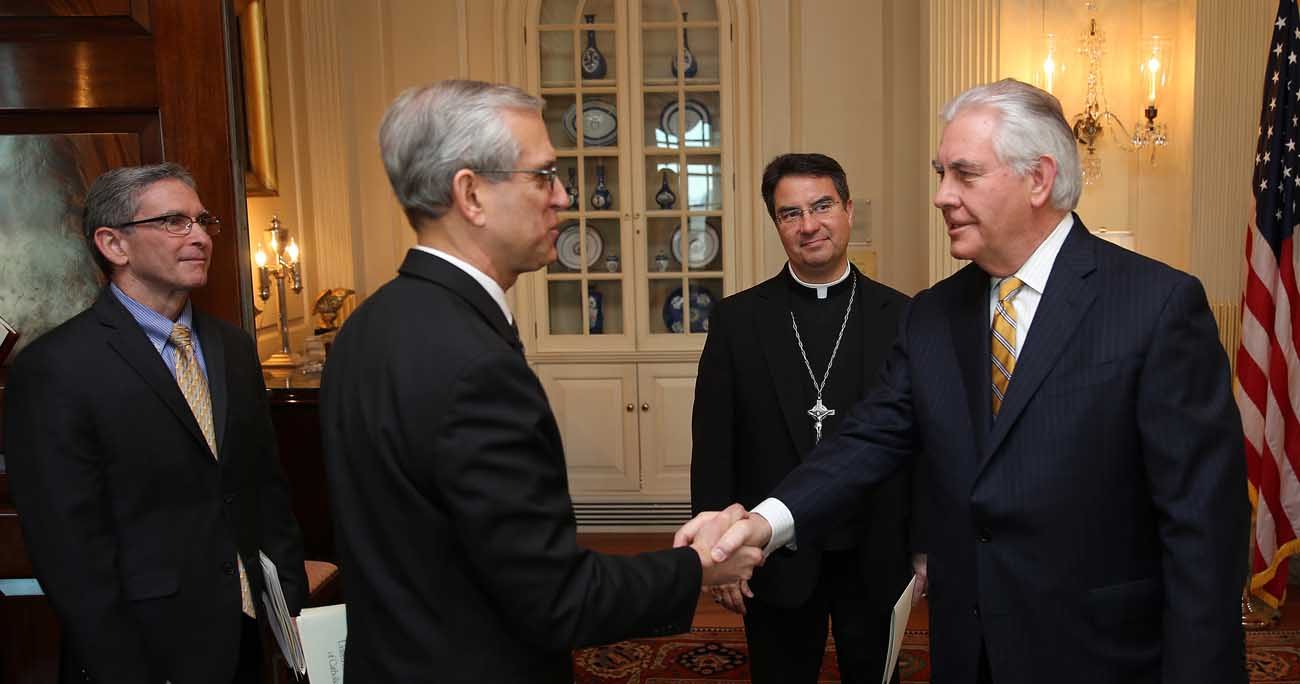 Bishop Oscar Cantu of Las Cruces, N.M., center, looks on as Stephen Colecchi, director of the Office of International Justice and Peace at the U.S. Conference of Catholic Bishops, is greeted by U.S. Secretary of State Rex Tillerson during a March 23 meeting at the State Department in Washington. At far left is Stephen Hilbert, international policy adviser with the USCCB. (CNS photo/Bob Roller)

WASHINGTON (CNS) — The chairman of the U.S. bishops’ Committee on International Justice and Peace met with the country’s top diplomat, Rex Tillerson, March 23, for a policy-packed 35-minute conversation about immigration, the Middle East, Africa and the role of the Catholic Church’s efforts toward building “the common good.”

“After some small talk about Texas,” the two spoke about the Middle East, about Iraq and Syria, reaching out to Central America and Mexico, and the situation in Africa, said Bishop Oscar Cantu of Las Cruces, New Mexico, explaining his initial meeting in Washington with Tillerson, the U.S. secretary of state, who, like Bishop Cantu, hails from Texas.

Bishop Cantu said the meeting was about letting Tillerson know “that our only motive is to help build the common good, that we don’t have ulterior motives,” and explaining the bishops’ peace and justice committee’s work in the Middle East, Africa, Latin America and the Far East.

Bishop Cantu, as the chairman of the Committee on International Justice and Peace, has spoken for a two-state solution in the Israel-Palestine conflict, against the construction of Israeli settlements in Palestinian territories, for reducing the United States’ nuclear arsenal, and raised concerns about an executive order that targets refugees from some countries with predominantly Muslim populations, which are odds with stances taken early by the Donald Trump administration.

“I have concerns,” he said in an interview with Catholic News Service, but said the meeting with Tillerson was about establishing a relationship that can help the church advocate for policy issues to help the common good.

“We bring a unique perspective,” said Bishop Cantu. “One of our principles in Catholic social teaching is the common good and that goes beyond our own church needs.”

Bishop Cantu said he talked about the church’s efforts in Congo and South Sudan and the need for stability in such places. U.N. agencies said in February that famine and war in the area are threatening up to 5.5 million lives in the region.

Because of the church’s humanitarian agencies, its solidarity visits, and long-term contact with local governments and populations around the world, the church lends a credible voice, Bishop Cantu said.

“He expressed that he was eager to have open lines of communication with us and to listen to our perspective on things,” Bishop Cantu said.

“The two areas we especially touched on were the Middle East and how to rebuild in Iraq and Syria. And the second topic that he wanted to hear our perspective on is the immigration issue, particularly how to reach out to Central America and Mexico,” said Bishop Cantu.

He said he emphasized to Tillerson the importance of having countries where religious minorities have a say in the government and of investing in rebuilding countries. The proposed Trump administration budget has been criticized for its plans to slash funding for the State Department up to 28 percent, or $10.9 billion. The cuts would greatly affect the department’s Food for Peace Program, which reduces hunger and malnutrition in poor countries, while proposing a $54 billion, or 10 percent, increase in military spending.

Bishop Cantu said he left information with Tillerson about the church’s concerns with the proposed budget.

“We’re concerned about the very steep increase in the military budget, the cutting back on foreign aid, we’re very concerned about that. I did want to emphasize how important development is in regions that need to be stabilized,” he said, “that those are wise investments of time and funds.”

The meeting also included a discussion about Christians in the Middle East, Bishop Cantu said, “and that Christians don’t want to live in a ghetto. … They believe it’s important that they live in an integrated society that is safe and secure,” to have a voice in local, regional as well federal government. He said he also emphasized “the fact that the (Catholic) church in the Middle East can act as a voice between the Sunnis and the Shia” and the importance of the church remaining in places such as Iraq and Syria.

“Any wise government official wants to listen to the voice of people who have a stake in different areas and to listen to the wisdom of experience,” Bishop Cantu said. “We have our brothers and sisters there, the church, who do live there. The fact is that … we bring a trusted voice.

“We bring some wisdom to the conversation,” he added. “Our vision is to build a society that’s stable, that’s just, that’s peaceful, and ultimately, that’s the goal of the state department … and so I think that’s why our voice is valuable to them.”