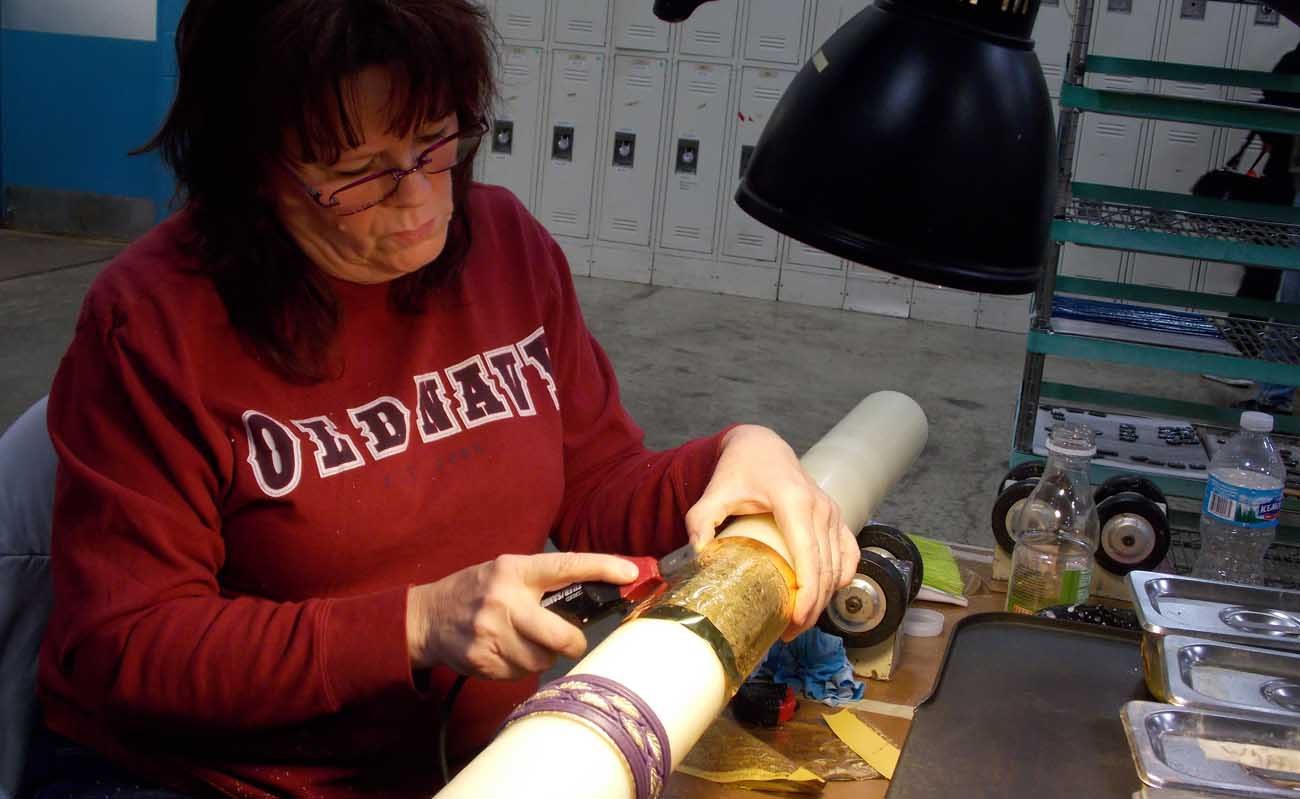 Production worker Rose Marie Dixon uses a sander to apply gold foil to a paschal candle March 10 at the A.I. Root Co. in Medina, Ohio. The candles are made to order and shipped to churches across the United States. (CNS photo/Katie Breidenbach)

MEDINA, Ohio (CNS) — Dozens of little wax flowers lay on the table in front of her. With a gentle grip, Judy Hamrick picks up each one and covers the back in glue.

“It’s very peaceful work,” Hamrick said. “I’ve worked here 24 years and every paschal season I’ve been out here and we enjoy it out here.”

Nearby are countless other wax decorations in the shape of lambs, crosses, numbers and Greek letters. Tubs of wax, rulers, brushes and boxes of pins lay strewn on Hamrick’s desk and the desks of her co-workers.

“It’s exciting when you put it all together,” added another decorator, Rose Marie Dixon.

Each element is carefully measured and attached, by hand, to a long wax pillar. After about 45 minutes, the women finish decorating one paschal candle. Their factory, the A.I. Root Co. in Medina, will create over 1,500 of these liturgical works of art and ship them to churches across the country.

“We probably make about 25 to 30 a day,” said Brad Root, president and chairman of the A.I. Root Co. “It’s the 15 weeks leading up to Easter that the majority of the paschal candles are made and shipped.”

The paschal candle is a central part of the Easter season, placed in a prominent location in each church’s sanctuary to symbolize Christ and the light of his resurrection. During the Easter Vigil, the celebrant will light the candle for the first time and insert five grains of incense into the wax to recall Christ’s five wounds. He will then carry the flame through the darkened church, spreading the light as he processes.

When the Easter season concludes, the paschal candle will be present at baptisms and funerals, recalling the new life given by Christ.

“It’s supposed to be a candle that shows a certain amount of dignity within the church,” Root told Catholic News Service. “It’s an important part of the spiritual message not only at Easter with the Resurrection, but to each person’s funeral throughout the year.” 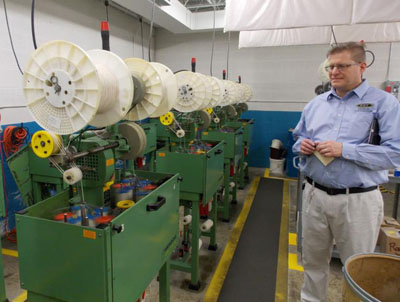 Brad Root, president of A.I. Root Co., watches wicks being braided March 10 at the family-run company in Medina, Ohio. Root is the great-great-grandson of the founder. (CNS photo/Katie Breidenbach)

The origin and traditions associated with the paschal candle date back to at least the fourth century and are described in writings by St. Jerome and the historian Venerable Bede. For the Medina factory, the ancient tradition has become a family tradition. The A.I. Root Co. was founded in 1869 by Amos Ives Root and is still owned by his direct descendants.

“I’m the fifth generation of the business,” explained Root, who is the founder’s great-great-grandson. “The company actually started up in the town square where A.I. was a jeweler and a bunch of bees landed on his window.”

The providential insects launched A.I. Root into the beekeeping business and inspired him to build the first bee supply company in America. The oldest part of the brick factory is still emblazoned with a huge stone beehive surrounded by the words “In God We Trust” and the year it was built, 1878.

The Roots shifted from beekeeping to candle-making after another providential encounter. A local priest told the founder’s son, Huber Root, that he needed quality candles for his worship space. Gleaning beeswax from the family hives, the young Root hand-rolled the company’s first liturgical candles.

Now seasoned experts with a whole line of church and consumer products, the Root family has modernized and expedited the candle-making process. Today, paschal candles are molded by machines through a process called extrusion.

“(Wax) shavings are being forced under a tremendous amount of pressure to push out a candle almost like a Play-Doh machine,” described Root. The resulting pillars of wax are cut to size, then sharpened or melted into a pointed candle.

Though most of the process is mechanized, paschal candle decoration still requires the touch of craftsmen. Decorators pour colored wax into tiny molds and, once cooled, pop them out and coat them with glue. The workers then carefully place each item on the candle and tack it down with pins. Sometimes foil is rubbed against the candle to create a metallic background, or hot wax is brushed on just like paint.

The decorations themselves are steeped in tradition and symbolism. The cross figures prominently, as does the current year, reminding the faithful that Christ is present in the here and now. The candle also includes the first and last letters of the Greek alphabet — alpha and omega — recalling that Jesus is the beginning and the end of all.

“The ladies that decorate these candles take pride in these candles,” said Hamrick. “They do their very best with them.”

Carefully wrapped and boxed, the completed waxen works of art are finally shipped to churches across the country. In the coming weeks, the company will dedicate long hours to completing all the paschal candles before Easter.

“I think he’d be very proud,” said Root, speaking of the factory’s founder. “We’re providing something that’s important to the spiritual needs of people.”

“It gives off love, you know,” summarized Hamrick. “It’s just something that’s beautiful and something that God wants us to do to make the occasion special.”