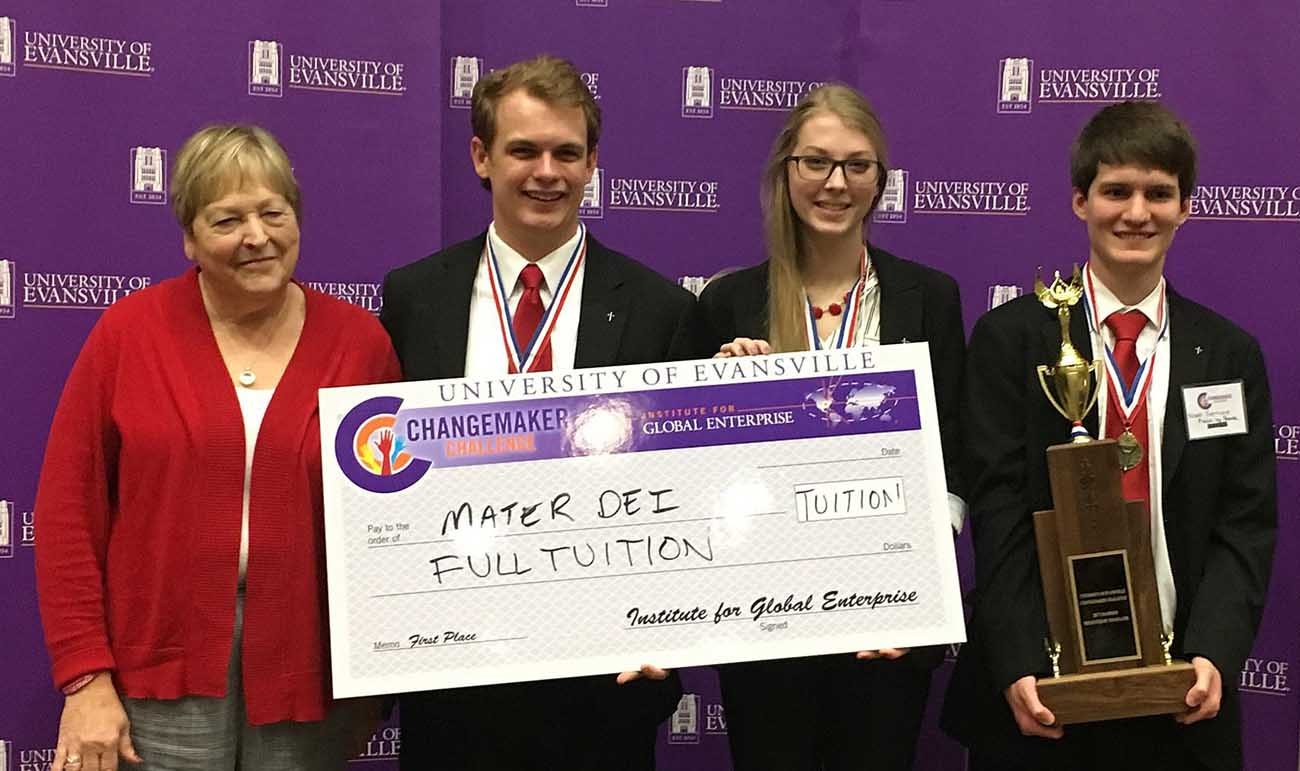 Teacher Donna Lefler of Mater Dei High School in Evansville, Ind., stands with students Austin Bowen, Michaela Kunkler and Noah Harrison, who are holding a ceremonial check and trophy for their first-place finish in the University of Evansville's High School Changemaker Challenge in February. The three seniors won for designing a board game that focuses on bullying and the fight against it. (CNS photo/courtesy Mater Dei High School)

EVANSVILLE, Ind. (CNS) — Austin Bowen, Noah Harrison and Michaela Kunkler, seniors at Mater Dei High School in Evansville, have some ideas on how to combat bullying. Those ideas have helped them each land a full scholarship to the University of Evansville.

The trio recently won the university’s High School Changemaker Challenge; the grand prize is a full scholarship to the university for each member of the winning team.

The University of Evansville website for the challenge explains the high school competition as being “designed to motivate young people to take a leading role in identifying and solving challenges in the world around them through innovation and creativity.”

Bowen will major in psychology, Harrison in history and Kunkler in visual communications. That’s a truly effective blending of interests when it comes to creating the kind of board game they developed as an anti-bullying education tool. They call it “Piece-by-Peace,” and it is already gaining notice at ever-expanding levels.

The trio has already had inquiries from Ohio and elsewhere. “Holy Redeemer School in Evansville wants it,” Kunkler said, “and Youth First (an agency that provides counseling services in the Evansville area) is very interested in the game. I also have talked about it with a social worker I know who lives in Indianapolis, and she is very interested in getting it.”

“Piece-by-Peace” features a game “trail” that meanders around the outside of a heart made from multicolor pieces. The trail includes tiles that match the colors in the heart, and each of those colors relates to some element of bullying and efforts against it. 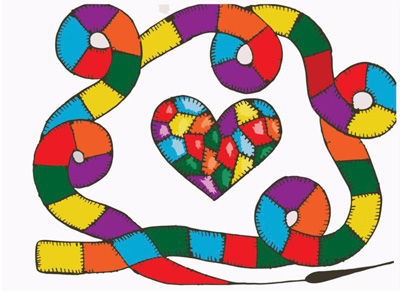 This is the graphic design of an award-winning board game called “Piece-by-Peace” created by three seniors at Mater Dei High School in Evansville, Ind. Each of the colors represents either a form of bullying, facts about bullying or information about combating bullying. (CNS photo/courtesy Mater Dei High School)

As players move around the trail, they get information on topics related to each color. “The purple is for isolation bullying, which occurs when everyone just ignores a person,” Harrison explained in an interview with The Message, newspaper of the Diocese of Evansville. “Green is for verbal bullying, blue for cyberbullying and red for physical bullying.”

“The yellow represents ‘Did you know?’ facts about bullying to help educate people about what they can do when they or someone they know experiences it,” Bowen added. “The orange is for ‘fun facts’ that help educate people, too.”

The game itself is straightforward — players move around the board, stopping on different colors and discussing the issues related to that color. When they stop on a color, they claim a piece of the heart in that color. The game concludes when all the pieces of the heart have been claimed.

Mater Dei teacher Donna Lefler, who served as the team’s faculty adviser, said they began kicking around ideas about four months before the February 2017 competition.

“We began our conversations by listing social problems like homelessness, teen suicide, etc.,” Lefler said. “After the death of the young man from Central High School (in Evansville), where bullying played a major role, bullying became the issue.

“Our Youth First counselor at Mater Dei, Val Dassel, stressed that there are many people — young people and adults — who, like that young man, don’t report their situations, so they feel helpless to deal with the situations and their feelings.”

Lefler said that Bowen, Harrison and Kunkler ultimately decided on the game, and Kunkler took the lead in its visual design. “Piece-by-Peace, the name, came up after we were rolling full tilt on the game,” Lefler said. It came from a mother who saw something that we hadn’t yet seen.  (The students) began to research, and it became an animal on its own.”

Lefler said the work included surveys of Mater Dei students in religion classes, and interviews with students outside of class, psychologists and other therapists. And just like that, they were writing the game and its rules.

The trio is now working on copyright and trademark registration. Kunkler, Harrison and Bowen are searching for financial investors as they complete arrangements to manufacture game pieces, print the game and work with a game-holder company.

“These kids are the epitome of intelligent, respectful and committed youth,” Lefler said. “Young people like them restore and build on my faith for our future.”

For more information on “Piece-by-Peace,” email the students at piecebypeace17@gmail.com; or visit their Changemaker Challenge Facebook page at https://www.facebook.com/CMCPieceByPeace.

Lilley is editor of The Message, newspaper of the Diocese of Evansville.