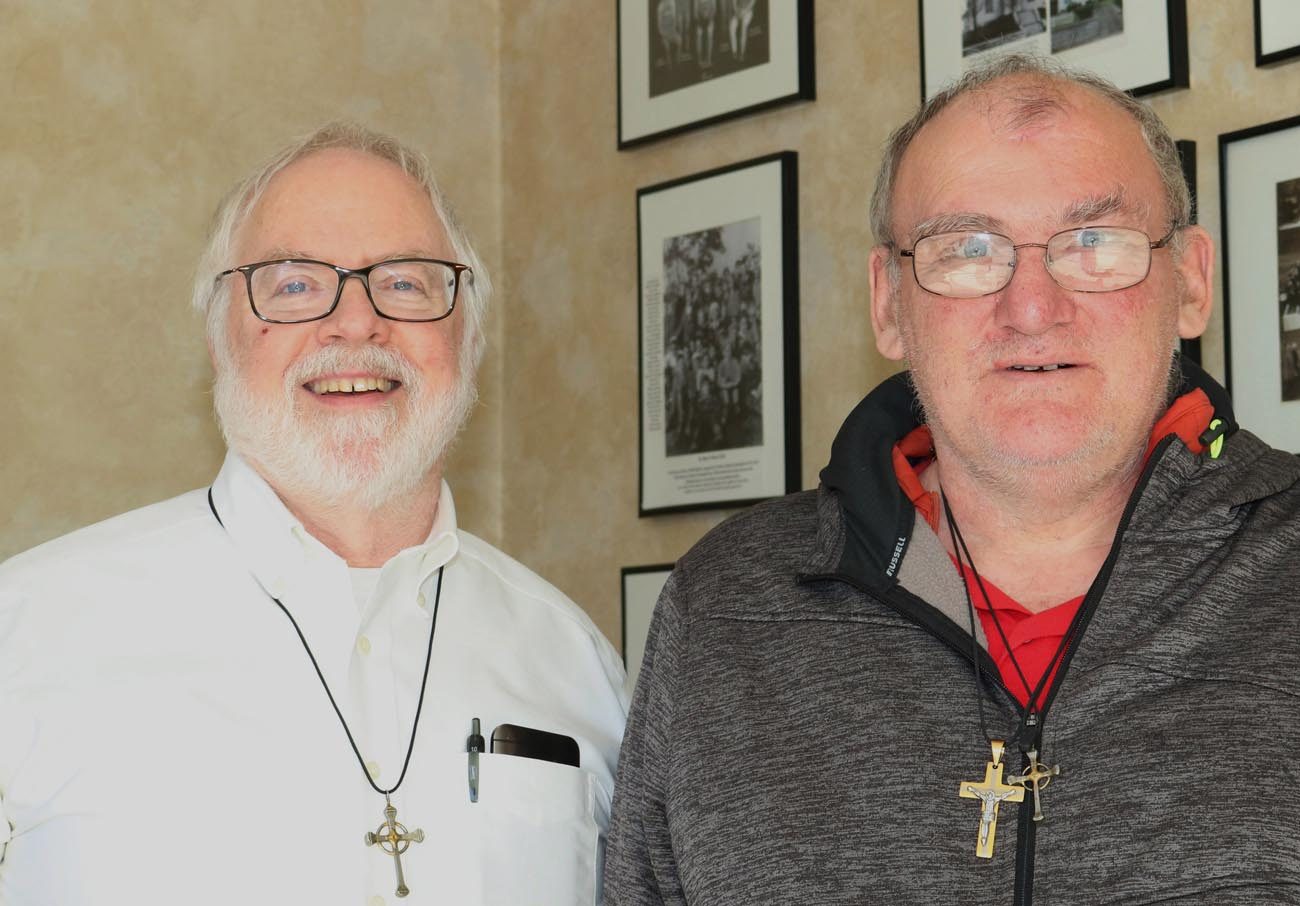 Deacon John Dugan and Todd Smith are seen in this March 6 photo wearing their Light of the World crosses at St. Mary Parish in Uxbridge, Mass. Smith, a former homeless man, says the Rite of Christian Initiation of Adults and the Light of the World evangelization program of the Diocese of Worcester has changed his life. (CNS photo/Tanya Connor, The Catholic Free Press)

UXBRIDGE, Mass. (CNS) — After Todd Smith’s mother died, he took care of other elders. After they died, he was left homeless.

A piece of bread — and the bread of life — changed him.

Smith, 55, tells this story of his life, with help from other St. Mary Church parishioners in Uxbridge.

He and his father took care of his mother when she had cancer. She died in 2001 at age 65.

“I lost three-quarters of myself,” Smith recalled. “I loved my mother. I haven’t found that type of love ’til now.”

Between then and now his life has been changed by the Rite of Christian Initiation of Adults and the Light of the World evangelization program of the Diocese of Worcester.

Smith said that after his mother died, he became homeless. An elderly friend let him stay with her in exchange for taking care of her. He also took care of three other widows. After they died, he was homeless again.

“I lived in a junkyard,” Smith told The Catholic Free Press, the diocesan newspaper. “Then we get to the good stuff: I went to the food pantry.”

When he arrived at the People First Food Pantry Dec. 14, 2014, a worker there stuck out her hand — to shake his and give him some bread.

“And then she put her arms around me and brought me inside for more food,” Smith said. “That arm is special. … It’s God’s hand. … That bread just … turned me around.”

“You got the bread of life,” Dwain Robbins, St. Mary’s RCIA coordinator, told him.

Smith’s “angel” at the food pantry, who chooses to remain anonymous, did more than feed him. She and a Protestant minister helped Smith get a motel room. Others helped him obtain Social Security disability benefits, medical care and, eventually, an apartment.

When Smith asked about area churches, the food pantry angel told him about St. Mary’s. So Smith met the pastor, Father Nicholas Desimone, who eventually helped him join the RCIA program.

He was received into the Catholic Church at the Easter Vigil in 2015. (He had been baptized in a Congregational church as a baby, but stopped attending services at age 18.)

“I felt God in me; I was flying high,” Smith said of the night he became Catholic.

“We had to hold you down,” Susan Leighton, St. Mary’s administrative assistant, reminded him.

Leighton said Smith was very sick at the time. Parishioners were concerned he might not live to see the next Easter Vigil. They have stretched out the RCIA’s post-vigil mystagogy so he can better understand what he has learned.

Mystagogy has its origins in Greek and means “to lead through the mysteries.” It is a period of accompaniment for new Catholics as they better understand what it means to participate in the sacramental mysteries.

They taught him how to pray and study the Bible and he forced them to communicate the faith better, said Smith and fellow parishioners.

How did he convince them to become Catholic? “They knew I was wild and they were praying to God I’d get off the street.”

Smith not only left the streets; he entered a family.

St. Mary’s RCIA once was “very much a school model … more about information,” Robbins said. Now the program is more communal as candidates share their journeys. While it is not RCIA’s role to meet a person’s physical and emotional needs, the team did that with Smith.

That community bond was strengthened with Smith’s participation in the Light of the World retreat and in a small faith-sharing group.

“The Light of the World … has awoken me,” Smith said. “I said, ‘This church is glowing in the night, beaconing everybody to come to it. … They all become one with Jesus.'”

Smith described a drawing of descending and ascending steps he made: “It shows the Light of the World taking me to heaven.”

Meanwhile, he’s spreading the light on earth. And not just at church. He tells of praying with people who’ve had health problems like his, including fellow residents at his apartment complex. He socializes there too.

Is he trying to evangelize others?

Just be friends, he said. As for evangelization, “it’ll come.”