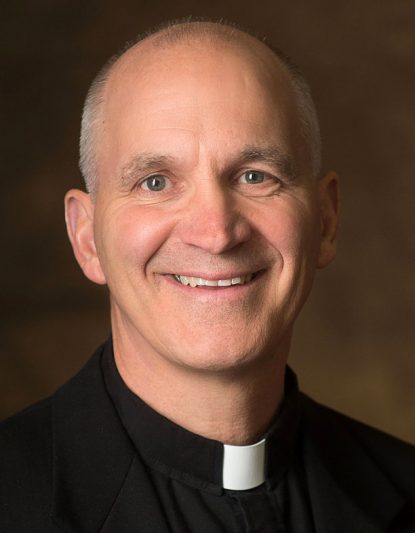 Pope Francis has named Father Steven Biegler, a priest of the Diocese of Rapid City, S.D., to head the Diocese of Cheyenne, Wy. Bishop-designate Biegler, ordained a priest in 1993 by then-Bishop Charles J. Chaput, is pictured in a March 7 photo. (CNS photo/West River Catholic)

WASHINGTON (CNS) — Pope Francis has named Father Steven Biegler, a priest of the Diocese of Rapid City, South Dakota, to head the Diocese of Cheyenne, Wyoming.

Bishop-designate Biegler, who turns 58 March 22, is currently vicar general of his diocese and pastor of the Cathedral of Our Lady of Perpetual Help in Rapid City.

The appointment was announced March 16 in Washington by Archbishop Christophe Pierre, apostolic nuncio to the United States.

The episcopal ordination and installation of Cheyenne’s ninth bishop will take place June 5.

“The Lord has blessed this diocese abundantly through Father Steve’s priestly ministry for the past 24 years, said Rapid City Bishop Robert D. Gruss in announcing the appointment to the people of his diocese. “Throughout those years, he has been such an integral part of our presbyterate having left a lasting impact on his fellow priests.”

Through Bishop-designate Biegler’s years of ministry across the Rapid City Diocese, “countless parishioners have grown in their faith and benefited in other many ways. … He will be greatly missed,” Bishop Gruss said.

Bishop-designate Biegler has been vicar general of the Diocese of Rapid City since 2013. He has been pastor of the cathedral for the last year.

Born March 22, 1959 in Mobridge, South Dakota, he grew up on his family’s ranch near Timber Lake, South Dakota. He is one of 12 children born to Alfred and Mary Biegler. His father and one of his siblings is deceased.

After graduating from Timber Lake High School in 1977, he attended the South Dakota School of Mines and Technology in Rapid City for one year, 1977-1978. During the next eight years, he worked on the family ranch.

He then attended Immaculate Heart of Mary Seminary and St. Mary’s College in Winona, Minnesota, from 1986 to 1989, and graduated with a bachelor’s degree in philosophy. From 1989 to 1993, he attended the Pontifical North American College in Rome; he received a bachelor of sacred theology degree at the Pontifical Gregorian University.

He was ordained to the priesthood for the Rapid City Diocese in Timber Lake July 9, 1993 by its then-Bishop Charles J. Chaput.

“I was very pleased to learn of Father Steven Biegler’s recent appointment as the Bishop of Cheyenne by Pope Francis. I’ve known the bishop-elect since his days as a seminarian and ordained him a priest for the Diocese of Rapid City almost 25 years ago,” Archbishop Chaput said in Philadelphia March 21.

“For many years he’s served God’s people in South Dakota with great energy, joy and dedication as a parish priest and a diocesan administrator. The faithful in Wyoming are blessed to receive him as their new shepherd. The Holy Father has clearly demonstrated his confidence in the bishop-elect, who will be a gift to all those he serves.

“As Bishop-elect Biegler prepares to begin his episcopal ministry, I offer my heartfelt congratulations and pray that the Holy Spirit will strengthen him as a successor to the Apostles,” the archbishop said.

Pastoral assignments for then-Father Biegler after his ordination included: associate pastor, Cathedral of Our Lady of Perpetual Help in Rapid City, 1993-1994; administrator, Immaculate Conception in Bonesteel, St. Anthony’s in Fairfax and St. Francis Xavier in Ponca Creek, 1994-1996; and co-pastor at five parishes, including St. Bede in Wakpala, 1996-2003.

From 2003 to 2006 he was director of apostolic and pastoral formation at the Pontifical North American College in Rome. From 2006 to 2007 he was assistant to the rector of Casa Santa Maria, also in Rome, while he attended the Pontifical University of St. Thomas (Angelicum) where he earned a licentiate in sacred theology.

Returning to South Dakota in 2007, he spent the next three years as chaplain to Rapid City Catholic Schools, and chaplain at the Newman Center at South Dakota School of Mines and Technology Chaplain. During that time he also served in pastoral ministry at St. Michael Parish in Hermosa.

From 2010 to 2011, he was diocesan administrator after then-Bishop Blase J. Cupich was named bishop of Spokane, Washington, and until Bishop Gruss was installed to head the diocese. From 2011 to 2015, he was pastor of Our Lady of the Black Hills in Piedmont.