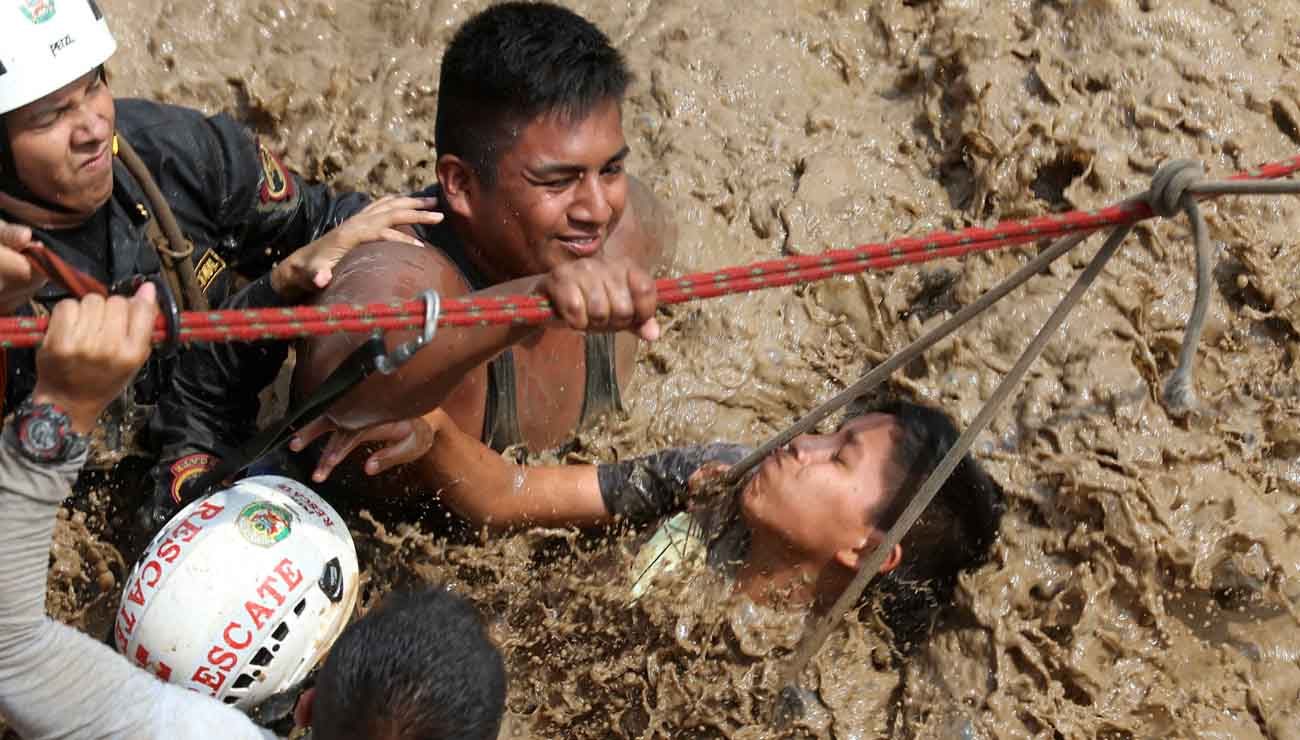 Agents of the Peruvian National Police rescue people from floodwaters March 17 near the Rimac and Huaycoloro rivers in Lima. (CNS photo/Ernesto Arias, EPA)

LIMA, Peru (CNS) — Felicita Chipana was at work when the Rimac River began to rise. By the time she got home, her kitchen was gone, swept away by floodwaters that left scores of families homeless on the east side of this sprawling capital city.

“We have no water, no electricity, and there are mosquitoes everywhere,” she said as a bulldozer cleared sediment out of the river channel below what remained of her rustic house.

Her granddaughter had developed a fever after being bitten by mosquitoes, and her daughter had taken the child to the hospital.

Picking her way over boulders carried down the river by the flood, Chipana joined neighbors, who had also lost their houses, as Catholic Church workers coordinating emergency aid noted their names and the number of people in their households.

All morning, dozens of volunteers from several Lima parishes had gathered at Santa Maria Parish in Huachipa, in the Diocese of Chosica on Lima’s east side, the area hardest hit by flooding in March. They sorted and bagged donations of food and water for emergency distribution, setting aside huge sacks of clothes and bedding for later.

Unusually warm water in the Pacific Ocean off Peru is causing heavy rains on the usually arid coast, swamping cities that have poor drainage and destroying wood or mud-brick houses not built to withstand a downpour.

Rain in the Andes Mountains has triggered landslides, sending water and sediment cascading down rivers like the Rimac, blocking roads and sometimes burying vehicles.

Along the desert coast, flash floods raged down riverbeds that had been dry for years. Near Chipana’s house, floodwaters had swept away two trucks.

A video of a woman struggling out of a maelstrom of water, mud, tree trunks and rubble near a town south of Lima drew hundreds of thousands of viewers on YouTube.

“Urban neighborhoods have been built with no planning,” said Rocio Sanchez of the Chosica Diocese office of Caritas, the church’s humanitarian aid and development agency.

After landslides on the hilly east side of Lima in 2012, local governments stopped giving people title to lots in hazardous areas. But many neighborhoods have been built on unstable hillsides or in flood plains. Most residents of those neighborhoods are people who migrated to the city from rural areas, or, like Chipana, those migrants’ children.

Father Teofilo Perez, pastor of Santa Maria Parish, estimated that 750 of the 75,000 families within the parish boundaries have been affected. Some were stranded until the water level in the Rimac River dropped.

“People don’t take the necessary precautions,” said Father Perez, who became pastor in February, just before the worst of the flooding. “They’ve been building their homes closer and closer to the river.”

“As a boy, I never saw rain,” he said. Now his home town is partly underwater, along with other major coastal cities.

Farther north, farmers in Piura braced themselves last year when an El Nino was expected to pelt the coast with heavy rain. Instead, farmers battled drought.

So when rains came in January, people were grateful, said Manuel Alburqueque, director of the Jesuit-run Rural Research and Promotion Center (CIPCA, for its Spanish initials), in Piura.

But now nearly one-third of the people affected by the disaster live in Piura, where 10 hours of storms March 22 left the city awash. Peru’s weather service predicts that the rains will continue into April.

The Peruvian government has earmarked at least $800 million for reconstruction, which will include rebuilding nearly 200 bridges and repairing more than 3,700 miles of highway.

Periodic flooding has devastated Peru’s coast for thousands of years, but Alburqueque hopes that after the most recent disaster, residents and government officials will pay attention to zoning maps, to avoid rebuilding in high-risk areas.

“We need to build sustainable cities,” he said.

In Lima, Chipana is not sure what will happen to what’s left of her house.

“I’d like to move away from here,” she said, her eyes filling with tears. “But I have nowhere else to go.”

PREVIOUS: No date yet for Blessed Romero canonization, archbishop says