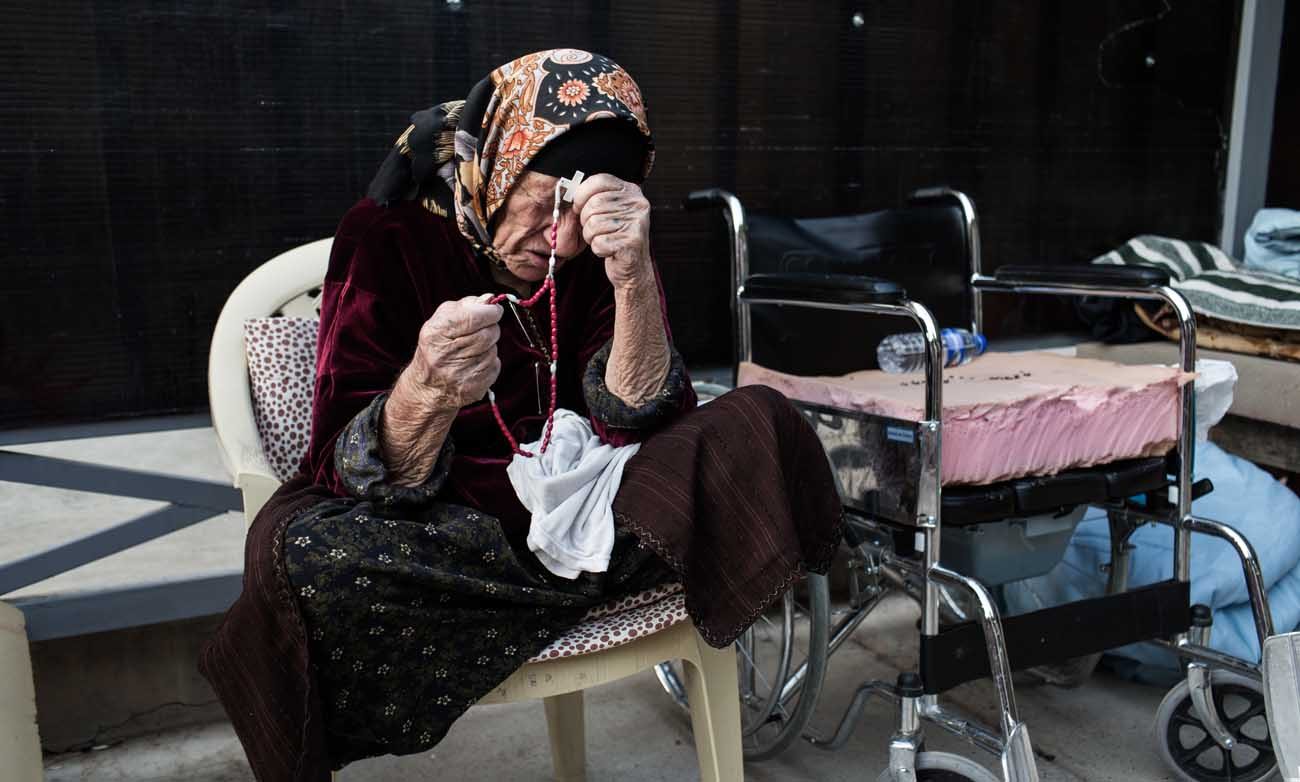 A displaced Iraqi woman prays the rosary in 2014 inside St. Joseph Church in Irbil, Iraq. The church gives refuge to thousands of people who were displaced by the Islamic State. (CNS photo/Daniel Etter, CRS)

VATICAN CITY (CNS) — Given the ongoing crises in the Middle East, North American, European and other Western nations will need to be more generous in coming to the aid of refugees and displaced peoples, said two prominent church leaders.

The answer is continued assistance, “not to close the gates of the countries where people are knocking for survival,” said Archbishop Silvano M. Tomasi, former Vatican representative to U.N. agencies in Geneva.

Cardinal Roger M. Mahony, retired archbishop of Los Angeles, told journalists that nations like Lebanon and Jordan have been “very heroic” in accommodating large numbers of refugees, “as compared to many other countries, especially the United States, which I think is gravely at fault here.”

The archbishop and cardinal spoke about a 10-day visit to Iraq, Jordan, Lebanon and Greece to visit refugees and church-based organizations offering aid and assistance. The March 9 media event was hosted by the Migrants and Refugees Section of the Dicastery for Promoting Integral Human Development.

“We saw humanity at its worst and humanity at its best on this journey,” Cardinal Mahony said. The worst was seeing situations “where men could so mistreat and maltreat other men, women and children.”

“On the other side, in the midst of all this suffering and pain, we found the best in the people,” who were involved in caring and bringing relief and aid to others, such as members of Catholic charities, international volunteers and nongovernmental organizations. “It was very inspiring.”

Both Archbishop Tomasi and Cardinal Mahony noted how the current populist sentiments in parts of Europe and the United States were negatively affecting the health, lives and dignity of millions of people needing accommodation and assistance.

“I can understand that with the political development of populist movements and xenophobic groups that politicians are concerned about limiting the massive arrival of people in the (European) Union,” Archbishop Tomasi said. However, he added, the consequence is people are trapped where they are, “they cannot go back and they cannot go forward,” and families often are broken up because they find themselves stuck in different countries.

Making the problem worse, Cardinal Mahony said, was an approach taken during President Donald Trump’s election campaign, which “posed people who are different from you, (as) a threat to you, a threat to your jobs” and “they’re going to harm you.”

“This generalization of people who are different as a threat just compounds the issue and the problem,” he said.

The best way to handle resettlement, he added, is for the incoming family to have local families and communities, like a parish, reach out and help integrate them into the local culture.

While the world struggles to find a solution to the refugee crisis, “we need to support the programs that are making their lives less miserable,” such as those run by Catholic Relief Services and Jesuit Refugee Service, Archbishop Tomasi said.

“Compassion fatigue should have no room at this moment,” as millions of people are still in need, he said.

PREVIOUS: Hear no evil: How culture of resistance may hinder child protection