Hear no evil: How culture of resistance may hinder child protection

VATICAN CITY (CNS) — When a child-protection advocate resigned from a papal advisory board in early March, she did so because of growing frustration with persistent resistance and a “toxic” sense of superiority from some in the Roman Curia.

A number of church leaders on the front lines promoting child protection policies have also long noted the biggest challenge they face is a cultural one — an aversion to the unknown, playing it safe rather than speaking up, and denial and defensiveness to protect an institution over a possible victim.

Despite four years of Pope Francis’ calls to break down walls erected out of fear and ivory towers built on arrogance, Marie Collins said a kind of enclave mentality could still be found in some corners of the Curia.

While there are many people who are “open and more willing to listen and learn,” the Curia and the Vatican tend to be “very much a closed-in system where people are talking to others with the same views and not being challenged at all, and so things appear normal that are not actually normal,” said Collins, an Irish survivor of clerical sex abuse, who had served on the Pontifical Commission for the Protection of Minors since its inception in 2014.

So when anything from the outside challenges the way things have traditionally been done, “it is almost an instinct to resist it, and that is what’s so difficult,” she told Catholic News Service after her resignation.

Attitudes that avoid or squelch open, respectful dialogue are pervasive in the wider church as well, she said, and they have “to be challenged right from the seminary on up.” Priests and religious who “know how damaging this clericalism is to the church” need to start “speaking up in their own ranks” and working to eradicate it. 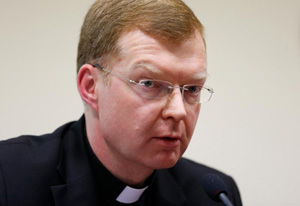 Jesuit Father Hans Zollner, a psychologist and academic vice rector at the Pontifical Gregorian University in Rome, attends a news conference at the university in this Feb. 16, 2015, file photo. (CNS photo/Paul Haring)

One priest working from within is Jesuit Father Hans Zollner, a psychologist and academic vice rector of the Pontifical Gregorian University in Rome. He is also a member of the papal commission for safeguarding; his work there focuses on what is needed in priestly and religious formation — specifically in selecting and fostering well-balanced, mature, responsible servants of Christ who truly seek to “live out what they promised to do.”

“From my understanding, this is the key to everything,” the priest told CNS.

There are many clear guidelines for proper formation, particularly from St. John Paul II and Pope Benedict XVI, he said, but “I don’t think that many church leaders understand or at least they don’t show many signs that they follow all the papal instructions on this.”

Many problems that emerge after formation are because of “a growing gap between the human side and the spiritual side. People may still say Mass and prayers, but they don’t feel connected to what they’re doing anymore. At a certain point it becomes unbearable and they act out or drop out,” he said.

“If you train people so they don’t show their real face and are threatened if they bring out the real issues” because they fear they will be shamed, ostracized or even dismissed from pursuing a vocation, then it is obvious people will not want to bring “the real stuff” out into the open, he added.

Seminaries and religious life, Father Zollner said, need to foster the trust that “it’s safe” to explore problems and tensions, and no one will be “dismissed, judged, shouted at or dealt with in a cold way when they show their real face.”

“I believe that many of the young men don’t feel invited to talk about normal things, things that are normal for young people, so they bury that,” which, according to St. Ignatius, he said, lets problems that could have been dealt with earlier “grow bigger and become like monsters.”

However, he said, seminarians must be responsible for their own formation, even if their formators are weak. 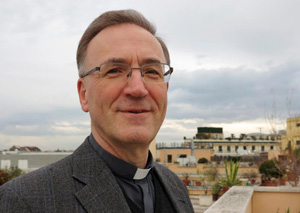 Understanding and being responsible for one’s own emotional, spiritual and human growth are key for creating accountable, responsible leaders, who will someday be in charge of a parish or a diocese and its staff and community, said Jesuit Father Stefan Dartmann, rector of the Pontificium Collegium Germanicum et Hungaricum in Rome — a German-speaking seminary serving dioceses in northern and central Europe.

Run by the Jesuits, the college puts unique emphasis on strengthening the seminarian’s sense of discernment and “co-responsibility” in his formation, and students are allowed to be part of the college leadership team.

The aim is to create men who can ask, “What has to be done,” not just for themselves, but for the whole community, he told CNS. This is critical because “we’ve had bishops who we know never asked” about protection training and protocols “because they felt very uncomfortable, so they waited,” he said.

There is “no reason to avoid going into the problems — it’s the other way around,” you are obliged to foresee and act, said Father Dartmann, who was at the tail end of his term as Jesuit provincial in Germany when the abuse crisis in the church, including in Jesuit schools, exploded in 2010.

That experience, he said, was “a Copernican revolution” for them because it put the point of view of the victims — not the church — at the center of concern. “I remember that ‘The truth will set you free,’ was very important for me” in learning to listen to, accept and be transformed by so much scandal.

If people let themselves be affected on a deeper level by what abuse did and does to children, then protection policies can become a real “apostolic priority,” he said.

Instead, if it is only seen as just another “obligation” or yet another burden to add to an already heavy curriculum or ministry, “then it has no effect and it doesn’t make me trustworthy,” Father Dartmann said.

It has to come from “our own discovery of the Gospel and freedom” and the desire to be in every way like Christ, he said.