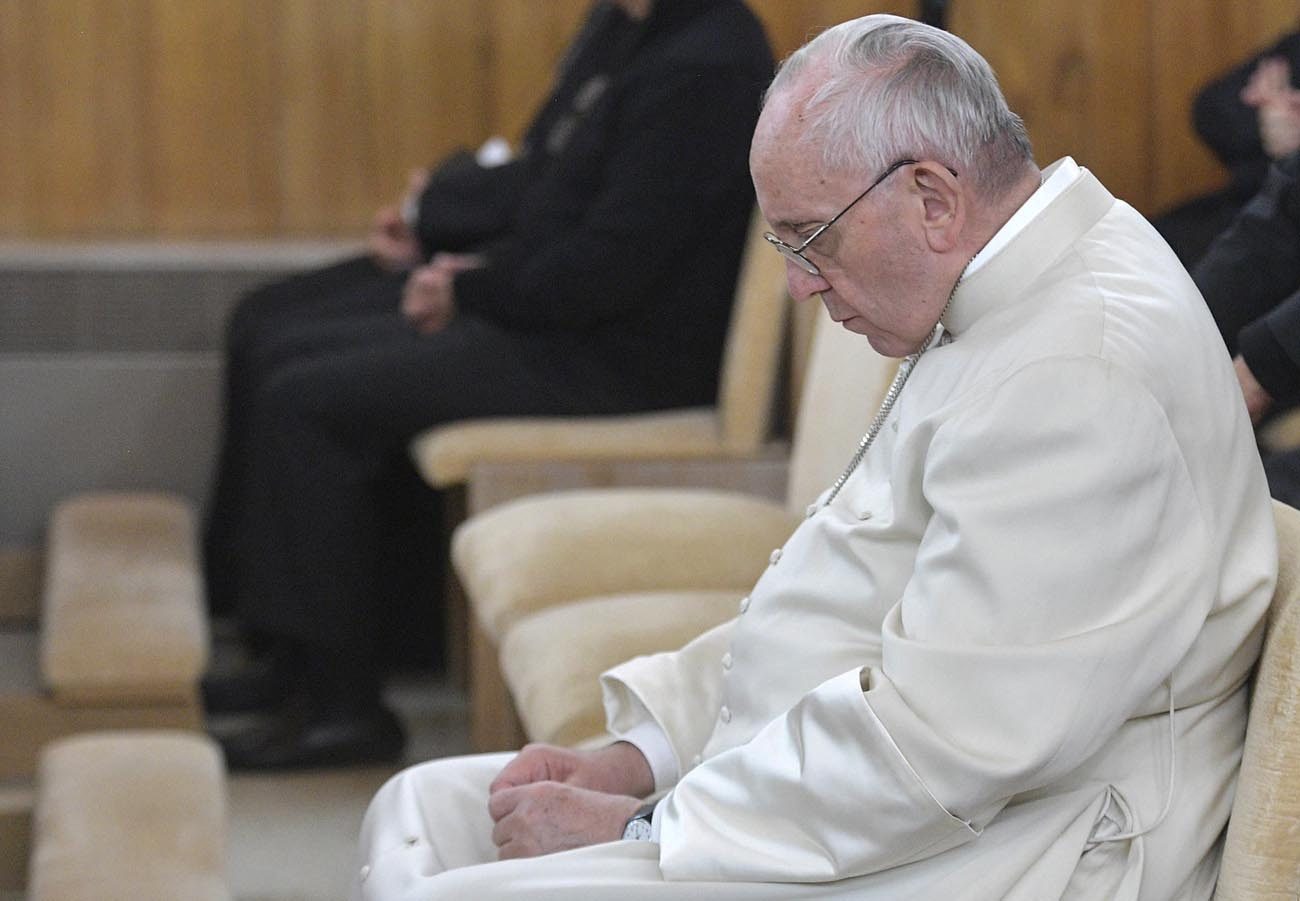 Pope Francis attends the first day of his Lenten retreat at the Pauline Fathers' retreat center in Ariccia, 20 miles southeast of Rome, March 5. The pope and top members of the Roman Curia are on retreat from March 5-10. (CNS photo/L'Osservatore Romano)

VATICAN CITY (CNS) — Humility is needed in order to recognize the voice of God in others, especially those who are perceived to be weak or subject to prejudice, a Franciscan friar told Pope Francis and members of the Roman Curia during their Lenten retreat.

God not only speaks through Jesus, but also speaks to him through Peter, who recognizes Christ as the Messiah “by revelation,” Franciscan Father Giulio Michelini said March 6, according to Vatican Radio.

The pope and top members of the Roman Curia attended their annual Lenten retreat March 5-10 at the Pauline Fathers’ retreat center in Ariccia, 20 miles southeast of Rome.

Father Michelini was chosen by Pope Francis to lead meditations on the Gospel of Matthew’s description of the passion, death and resurrection of Jesus.

The Franciscan delivered two meditations March 6, with the first reflecting on “Peter’s confession and Jesus’ path toward Jerusalem.”

According to Vatican Radio, Father Michelini called on the 74 people present for the retreat to reflect on the criteria on which they base their discernment and whether “I place myself and my personal benefit before the kingdom of God.”

To listen and act upon God’s will, he said, Christians must have “courage to go into the deep to follow Jesus Christ, taking into account that this involves carrying the cross.”

Jesus, he added, not only proclaimed the joy of the resurrection “but also trial” when he said “If anyone would come after me, let him deny himself and take up his cross and follow me.”

In the afternoon, Father Michelini delivered his second meditation, “Jesus’ last words and the beginning of the Passion.”

He explained that the reading of Christ’s Passion reveals two distinct types of logic: Jesus, an observant Jewish layman preparing to celebrate the Passover, and the high priests, who are concerned with the outward appearance of the feast but, at the same time, “prepare to murder an innocent man.”

The question Christians must ask themselves, he said, is if they are “sacred professionals resorting to compromise in order to save the facade, the institution at the expense of individual rights.”

“This is about an attitude that loses the right perspective, believing they are serving God,” Father Michelini said.

NEXT: With passage in House, Philippines poised to reinstate death penalty