Mexican bishop who speaks out faces criticism from state officials 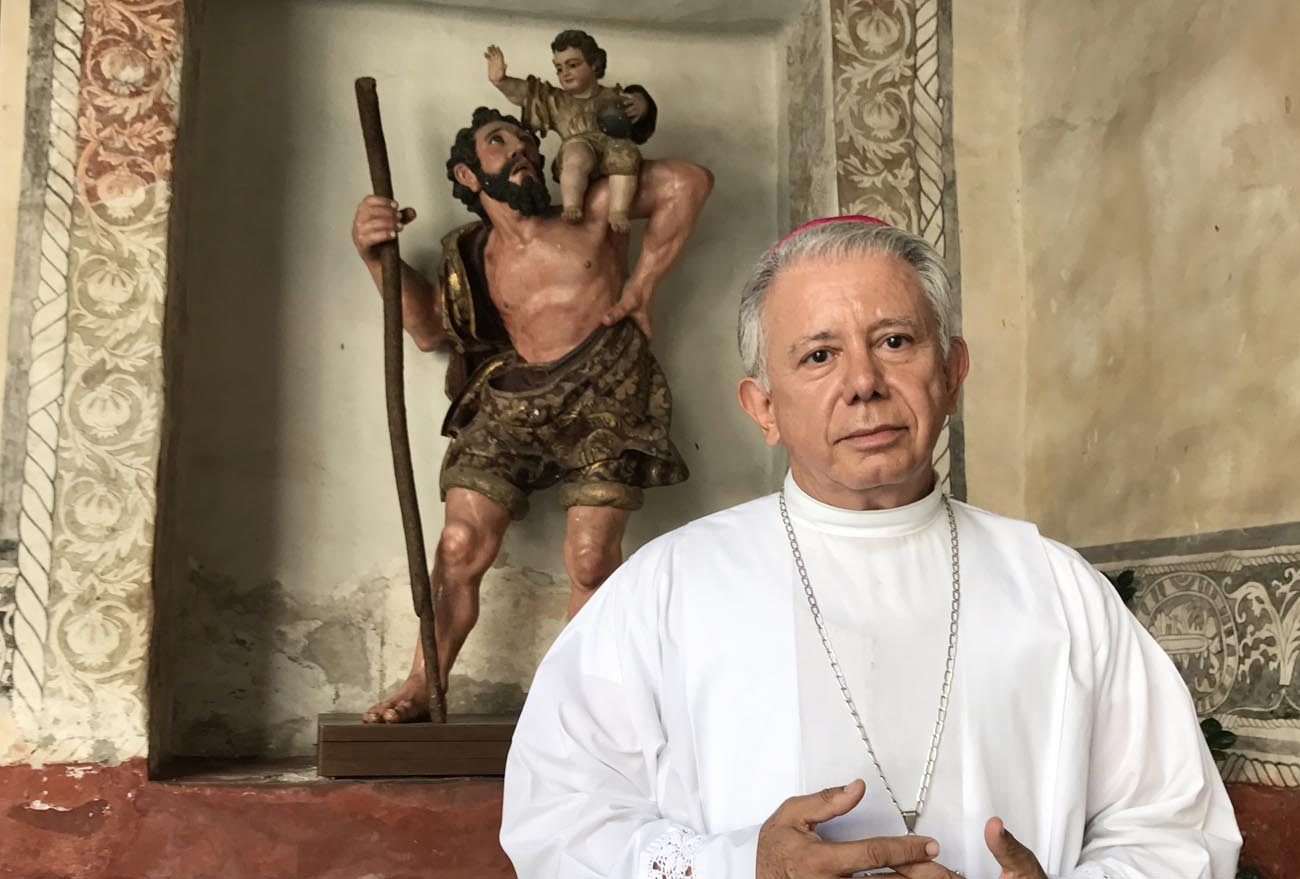 Bishop Ramon Castro Castro of Cuernavaca, Mexico, poses March 26 in the Assumption of Mary Cathedral in front of an image of St. Christopher from the colonial period. (CNS photo/David Agren)

CUERNAVACA, Mexico (CNS) — For years, bishops in Cuernavaca have requested repairs to the 1525 Cathedral of the Assumption of Mary.

Bishop Ramon Castro Castro finally persuaded a federal lawmaker to fund repairs worth roughly $4 million — but the money, by Mexican law, had to be administered by either the municipal or state governments. The bishop opted for the municipal government, figuring it was more trustworthy.

“I requested that the money not arrive via the state government because they’re accustomed to, in all … public works and public subsidies, taking between 30 percent and 40 percent for themselves,” Bishop Castro told Catholic News Service March 26. “Public works always have what we call a ‘moche'” — Mexican slang for a kickback.

Bishop Castro has come under attack from politicians and public officials upset for voicing suspicions of corruption in Morelos, a small state just south of Mexico City served by the Diocese of Cuernavaca. After the state government was omitted from management of the cathedral repair funds, stories surfaced of Bishop Castro allegedly diverting money from renovations to build a personal tennis court in the seminary — even though the courts were installed in 2014.

Personal attacks and accusations of misdeeds are becoming commonplace against Bishop Castro, who arrived in Cuernavaca in 2013 and is increasingly portrayed in the press as the main political opponent of image-conscious Gov. Graco Ramirez, a self-proclaimed “progressive.”

The bishop’s remarks against organized crime violence, his pastoral and spiritual support to victims of violence and convening of peace marches every May have brought a brushback from Ramirez, who has championed issues such as abortion and same-sex marriage and expressed presidential aspirations.

Ramirez has accused the bishop of illegal activities, including the theft of sacred art — something Bishop Castro says occurred before he arrived in Cuernavaca — and publicized a criminal complaint of sexual abuse committed in Campeche state, where Bishop Castro previously served. (Bishop Castro says the allegation came to his attention after he left Campeche.)

A sanctuary in the town of Tepalcingo, popular with pilgrims every year during Lent, was taken over in early 2016 by thugs, who committed sacrilege at the site and later brought in fake priests to attend to those visiting.

“The police didn’t move a finger,” Bishop Castro said, adding the state’s government minister let it be known “he would hold me responsible if there was violence.”

The governor also accuses the bishop of undue political meddling, the product of Bishop Castro publicly meeting with politicians planning to run for office in 2018. Bishop Castro says he convened the meeting early in March to promote peace in Morelos — contradicting Ramirez’s claims the state is calm — and held it in public in the interests of transparency.

Now Mexico’s Interior Ministry is looking into improper politicking in a country with a long history of unhappy church-state relations and where priests’ participation in political activities is still prohibited.

“We admonish the bishop to be respectful of the constitution and remember what Pope Francis recommended to his priests: Stay away from politics to recover faith in the Catholic Church, pray for your rulers and do not confront them,” Matias Quiroz, a Morelos government minister, told reporters, according to the newspaper El Universal.

On the bishop’s comments on possible corruption in the cathedral funds, Quiroz commented: “In that, he also lies. We act with transparency and the (federal) Finance Ministry vouches for it.”

The bishops of the Mexico City ecclesiastical province have backed Bishop Castro, sending a him a letter March 22, expressing “absolute solidarity with you against the attacks, calumnies, defamations and persecution you have been subjected to since your arrival in the sister Diocese of Cuernavaca.”

Bishop Castro say he is far from the only person being criticized for speaking out. Social movements, the local university rector and Catholic poet Javier Sicilia, who organized a victims’ rights movement after his son was murdered in Morelos, have been stifled, even though two irregular graves containing dozens of bodies each have been discovered in the state.

Bishop Castro brings an unconventional track record to Cuernavaca. He was ordained in Tijuana, studied in Rome, obtaining a doctorate in spiritual theology, and served in the Vatican’s diplomatic corps before becoming an auxiliary bishop in Yucatan.

He was sent to Cuernavaca in 2013, and the disagreements with Ramirez began almost immediately.

“He told me (in the first meeting) he had come to this state to implement new laws like equal marriage and abortion. And I told him, ‘I have the opposite mission, support the family and protect life,'” the bishop said. “This was our first difference of opinion.”

The disagreement with the governor went beyond social issues. Bishop Castro said he immediately began traveling around the state and had victims of violence asking him for assistance and expressing reluctance to go to the authorities.

“I realized that it was a wounded state, a diocese that was hurting due to violence, insecurity, the extortion being charged, human trafficking and an enormous amount of corruption,” Bishop Castro said.

The threats, he says, are not dissuading him, though the publicity is causing discomfort.

“I don’t like to be a protagonist or a populist,” Bishop Castro said. “I only want to defend my flock and speak the truth, because this pains me horribly.”

NEXT: Pope asks children to promise Jesus they will never be bullies