Pope asks children to promise Jesus they will never be bullies 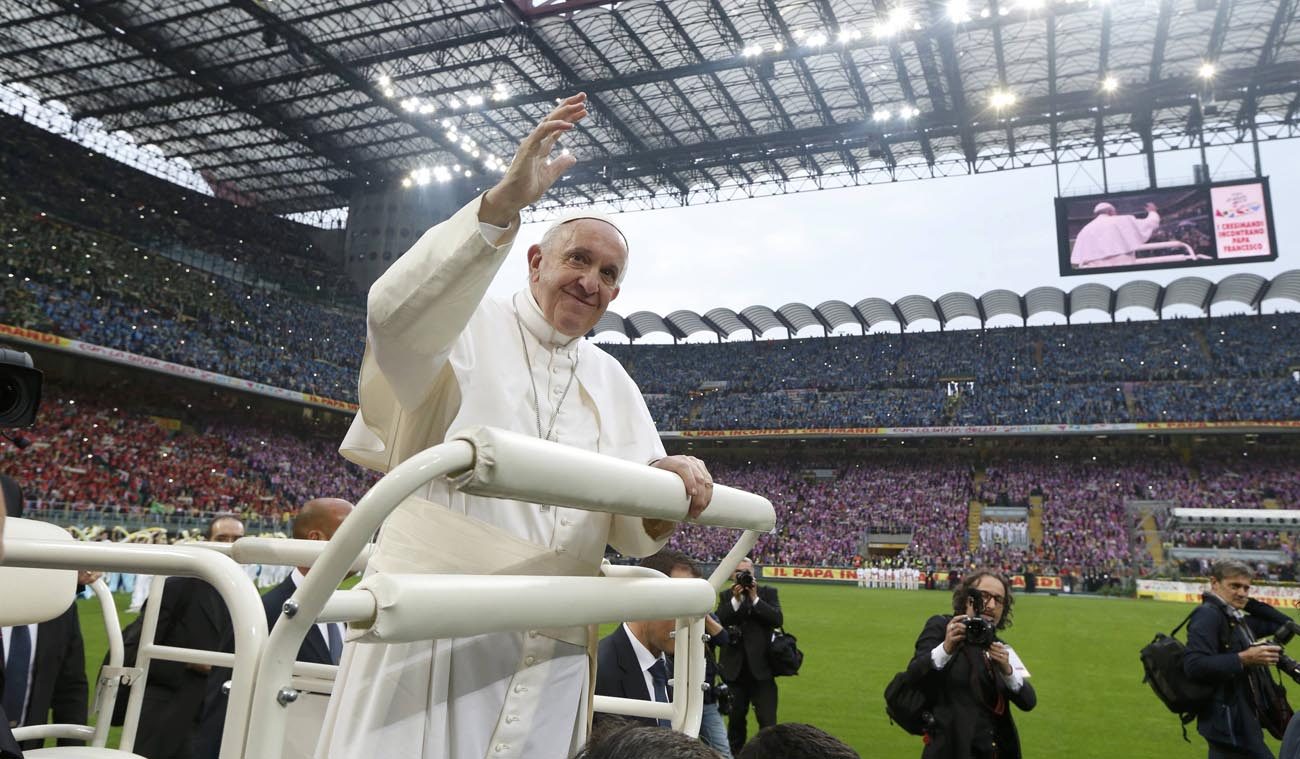 Turning stern during a lively and laughter-filled encounter March 25, Pope Francis told the youngsters he was very worried about the growing phenomenon of bullying.

He asked them to be silent and reflect on if there were times when they made fun of someone for how they looked or behaved. And, as a condition of their confirmation, he made them promise Jesus that they would never tease or bully anyone.

The pope ended his daylong visit to Milan by participating in an expanded version of the archdiocese’s annual encounter for pre-teens preparing for confirmation. An estimated 78,000 people filled the city’s famed San Siro soccer stadium; the archdiocese expects to confirm about 45,000 young people this year.

A boy named Davide asked the pope, “When you were our age, what helped your friendship with Jesus grow?”

First of all, the pope said, it was his grandparents. One of his grandfathers was a carpenter, who told him Jesus learned carpentry from St. Joseph, so whenever the pope saw his grandfather work, he thought of Jesus. The other grandfather taught him to always say something to Jesus before going to sleep, even if it was just, “Good night, Jesus.”

His grandmothers and his mother, the pope said, were the ones who taught him to pray. He told the kids that even if their grandparents “don’t know how to use a computer or have a smartphone,” they have a lot to teach them.

Playing with friends taught him joy and how to get along with others, which is part of faith, the pope said. And going to Mass and to the parish oratory also strengthened his faith because “being with others is important.”

A couple of parents, who introduced themselves as Monica and Alberto, asked the pope’s advice on educating their three children in the faith.

Pope Francis borrowed little Davide’s question and asked the parents to close their eyes and think of the people who transmitted the faith to them and helped it grow.

“Your children watch you continually,” the pope said. “Even if you don’t notice, they observe everything and learn from it,” especially in how parents handle tensions, joys and sorrows.

He also encouraged families to go to Mass together and then, if the weather is nice, to go to a park and play together. “This is beautiful and will help you live the commandment to keep the Lord’s day holy.”

An essential part of handing on the faith, he said, is teaching children the meaning of solidarity and engaging them in the parents’ acts of charity and solidarity with the poor. “Faith grows with charity and charity grows with faith,” he said.

Before going to the soccer stadium, Pope Francis celebrated an afternoon Mass for the feast of the Annunciation in Milan’s Monza Park.

The annunciation of Jesus’ birth to Mary took place in her home in a small town in the middle of no where, which is a sign that God desired to meet his people “in places we normally would not expect,” the pope said in his homily.

Just as “the joy of salvation began in the daily life of a young woman’s home in Nazareth,” he said, God wants to be welcomed into and given life in the homes of all people.

God is indifferent to no one, the pope said, and “no situation will be deprived of his presence.”

Tens of thousands of people gathered on a warm spring day for the Mass amid the new leaves and fragile buds on the trees of the park.

Pope Francis used Milan’s Ambrosian rite, a Mass that differs slightly from the Latin rite used in most parts of the world. Some of the differences included the pope blessing each of the readers and not only the deacon who proclaimed the Gospel, and the Creed being sung after the offertory, rather than after the homily.

In his homily, the pope said that like Mary at the Annunciation, people today naturally wonder how God’s promises could be fulfilled. “But how can this be?” Mary asked.

Finding and living the joy of the Gospel, he said, is possible only following the path the Angel Gabriel led Mary on when he told her she would bear God’s son. People must remember the great things God has done and remember that they belong to the people of God, a community that “is not afraid to welcome those in need because they know the Lord is present in them.”

Finally, he said, they must have faith in the “possibility of the impossible,” demonstrating the same “audacious faith” that Mary showed.

NEXT: Child protection commission seeks new ways to be informed by victims