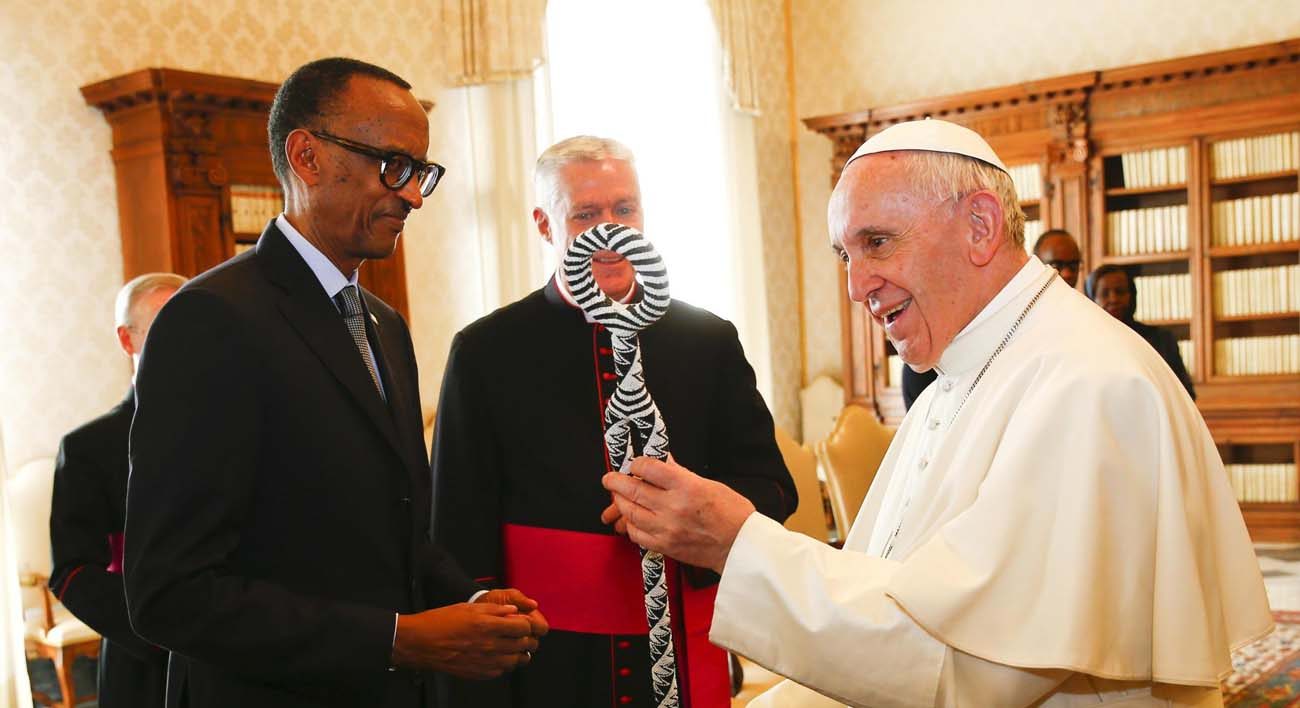 Pope Francis accepts a gift from Rwandan President Paul Kagame during a private meeting at the Vatican. (CNS photo/Tony Gentile, pool via EPA)

VATICAN CITY (CNS) — Meeting Rwandan President Paul Kagame, Pope Francis asked God’s forgiveness for the failures of the Catholic Church during the 1994 Rwanda genocide and for the hatred and violence perpetrated by some priests and religious.

“He implored anew God’s forgiveness for the sins and failings of the church and its members, among whom priests and religious men and women who succumbed to hatred and violence, betraying their own evangelical mission,” said a Vatican statement released March 20 after the meeting of the pope and president.

Some 800,000, and perhaps as many as 1 million people — most of whom belonged to the Tutsi ethnic group — died in the ferocious bloodshed carried out from April to July 1994.

“In light of the recent Holy Year of Mercy and of the statement published by the Rwandan Bishops at its conclusion” in November, the Vatican said, “the pope also expressed the desire that this humble recognition of the failings of that period, which, unfortunately, disfigured the face of the church, may contribute to a ‘purification of memory’ and may promote, in hope and renewed trust, a future of peace, witnessing to the concrete possibility of living and working together once the dignity of the human person and the common good are put at the center.”

Pope Francis “conveyed his profound sadness, and that of the Holy See and of the church, for the genocide against the Tutsi,” the Vatican said. “He expressed his solidarity with the victims and with those who continue to suffer the consequences of those tragic events.”

In President Kagame’s 25-minute private meeting with the pope, as well as during his meeting with Cardinal Pietro Parolin, Vatican secretary of state, note was made of “the collaboration between the state and the local church in the work of national reconciliation and in the consolidation of peace for the benefit of the whole nation,” the Vatican said.

In a statement read in churches throughout Rwanda Nov. 20, the country’s bishops apologized for “all the wrongs the church committed” during the genocide. “We regret that church members violated their oath of allegiance to God’s commandments” and that some Catholics were involved in planning, aiding and carrying out the massacres.

NEXT: Make way for the Gospel: Vatican ensures media give the message