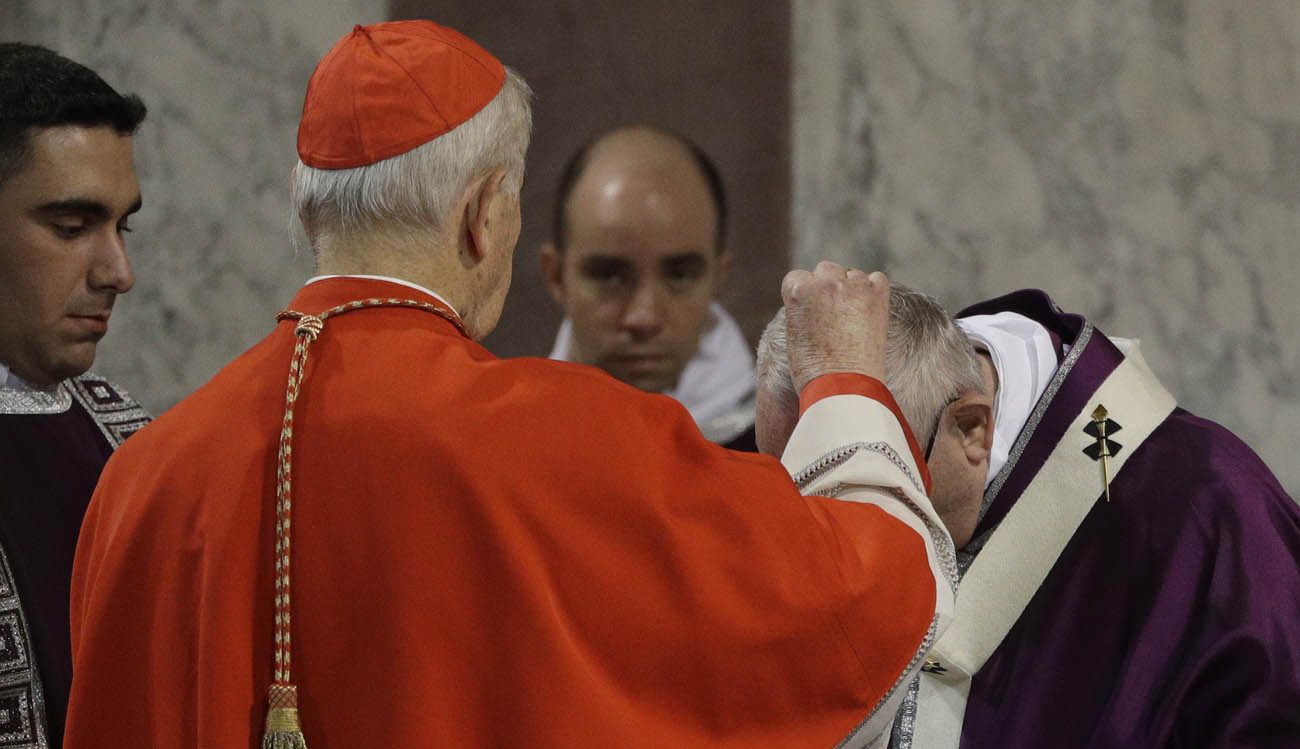 Cardinal Jozef Tomko places ashes on the head of Pope Francis during Ash Wednesday Mass at the Basilica of Santa Sabina in Rome March 1. (CNS photo)

ROME (CNS) — Lent is a time to receive God’s breath of life, a breath that saves humanity from suffocating under the weight of selfishness, indifference and piety devoid of sincerity, Pope Francis said.

“Lent is the time to say no to the asphyxia born of relationships that exclude, that try to find God while avoiding the wounds of Christ present in the wounds of his brothers and sisters,” the pope said March 1 during an Ash Wednesday Mass.

Pope Francis celebrated the Mass after making the traditional Ash Wednesday procession from the Benedictine monastery of St. Anselm to the Dominican-run Basilica of Santa Sabina on Rome’s Aventine Hill.

After receiving ashes on top of his head from Cardinal Jozef Tomko, titular cardinal of the basilica, the pope distributed ashes to the cardinals, his closest aides, some Benedictines and Dominicans.

He also distributed ashes to a family and to two members of the Pontifical Academy for Martyrs, which promotes the traditional Lenten “station church” pilgrimage in Rome.

Lent, he said, is a time to say “no” to “all those forms of spirituality that reduce the faith to a ghetto culture, a culture of exclusion.”

The church’s Lenten journey toward the celebration of Christ’s passion, death and resurrection is made on a road “leading from slavery to freedom” and “from suffering to joy,” he said. “Lent is a path: It leads to the triumph of mercy over all that would crush us or reduce us to something unworthy of our dignity as God’s children.”

The ashes, while a symbol of humanity’s origin from the earth, the pope said, is also a reminder that God breathes new life into people in order to save them from the suffocation of “petty ambition” and “silent indifference.”

“The breath of God’s life sets us free from the asphyxia that so often we fail to notice or become so used to that it seems normal, even when its effects are felt,” the pope said.

The Lenten season, he continued, is a “time for saying no” to the asphyxia caused by superficial and simplistic analyses that “fail to grasp the complexity of problems” of those who suffer most.

“Lent is the time to say no to the asphyxia of a prayer that soothes our conscience, of an almsgiving that leaves us self-satisfied, of a fasting that makes us feel good,” the pope said.

Instead, Pope Francis said, Lent is a time for Christians to remember God’s mercy and “not the time to rend our garments before evil but rather make room in our life for the good we are able to do.”

PREVIOUS: Lent is time to relive exodus from slavery to freedom, pope says

NEXT: Congo’s bishops: Don’t blame Catholics for blockage of peace accord