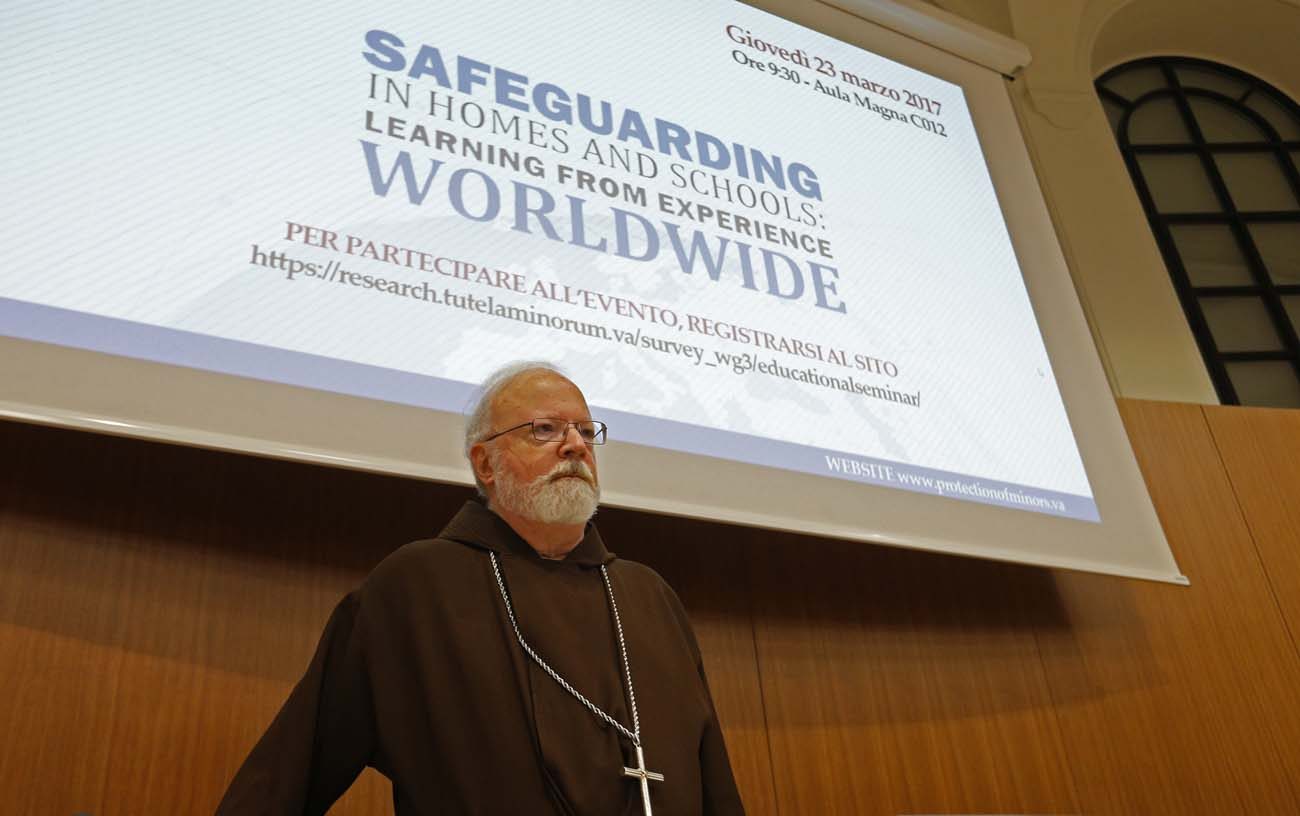 U.S. Cardinal Sean P. O'Malley, president of the Pontifical Commission for the Protection of Minors, is pictured during a seminar on safeguarding children at the Pontifical Gregorian University in Rome March 23. (CNS photo/Paul Haring)

ROME (CNS) — There is absolutely no excuse for not implementing concrete measures to protect minors and vulnerable adults from sexual abuse, said Cardinal Sean P. O’Malley of Boston.

“Let there be no doubt about it: Pope Francis is thoroughly committed to rooting out the scourge of sex abuse in the church,” he said, and “effectively making our church safe for all people demands our collaboration on all levels.”

The cardinal gave the opening prayer and address at a daylong seminar March 23 at Rome’s Pontifical Gregorian University. The seminar was sponsored by the papal advisory body Cardinal O’Malley heads, the Pontifical Commission for the Protection of Minors.

A representative of every office of the Roman Curia attended, including: Cardinals Pietro Parolin, secretary of state; Kevin Farrell of the Dicastery for Laity, Family and Life; Joao Braz de Aviz of the Congregation for Institutes for Consecrated Life and Societies of Apostolic Life; Marc Ouellet of the Congregation for Bishops; and Peter Turkson of the Dicastery for Integral Human Development. Also in attendance were rectors of pontifical universities and colleges, and representatives from the Italian state police and the Vatican gendarmes.

After leading a prayer calling for a greater love for God and his creation, especially “your little ones,” Cardinal O’Malley said holding a study day was an important part of fighting complacency and knowing “we must continue to learn from our experiences, including our mistakes,” and to better share resources and knowledge.

“There is simply no justification in our day for failures to enact concrete safeguarding standards for our children, young men and women and vulnerable adults,” he said. The church not only needs to “reform and renew” its own institutions, but its members also must be “witnesses and strong advocates” in society.

He said he told cardinals and the pope during a consistory in Rome two years ago that the church “must address the evil of sexual abuse by priests.”

While abuse by any kind of perpetrator is a problem, when the abuser is a priest, “the damage is even more profound.” Also, given “today’s world of instantaneous communications” Catholics are much more aware, and quickly, of the problem of abuse in the church and are “demanding that we, who are their pastors, take all necessary steps” to safeguard those in their care.

The papal commission, which was founded in 2014, is guided by a “victims-first” approach, he said, because all the best protection programs and policies “will be to no avail if we fail to put the victims and survivors first.”

While the cardinal did not mention the recent resignation of Marie Collins, the last active member who is a survivor of clerical abuse, he said the commission would be discussing during its closed-door plenary meeting, “How can victim/survivors continue to have a powerful voice in our work and help to guide us?” Collins, who was a member of the commission since its inception, stepped down citing a chronic lack of cooperation from some in the Roman Curia in following recommendations that had the pope’s support.

PREVIOUS: Make way for the Gospel: Vatican ensures media give the message

NEXT: Hardened hearts can turn believers into atheists, pope says