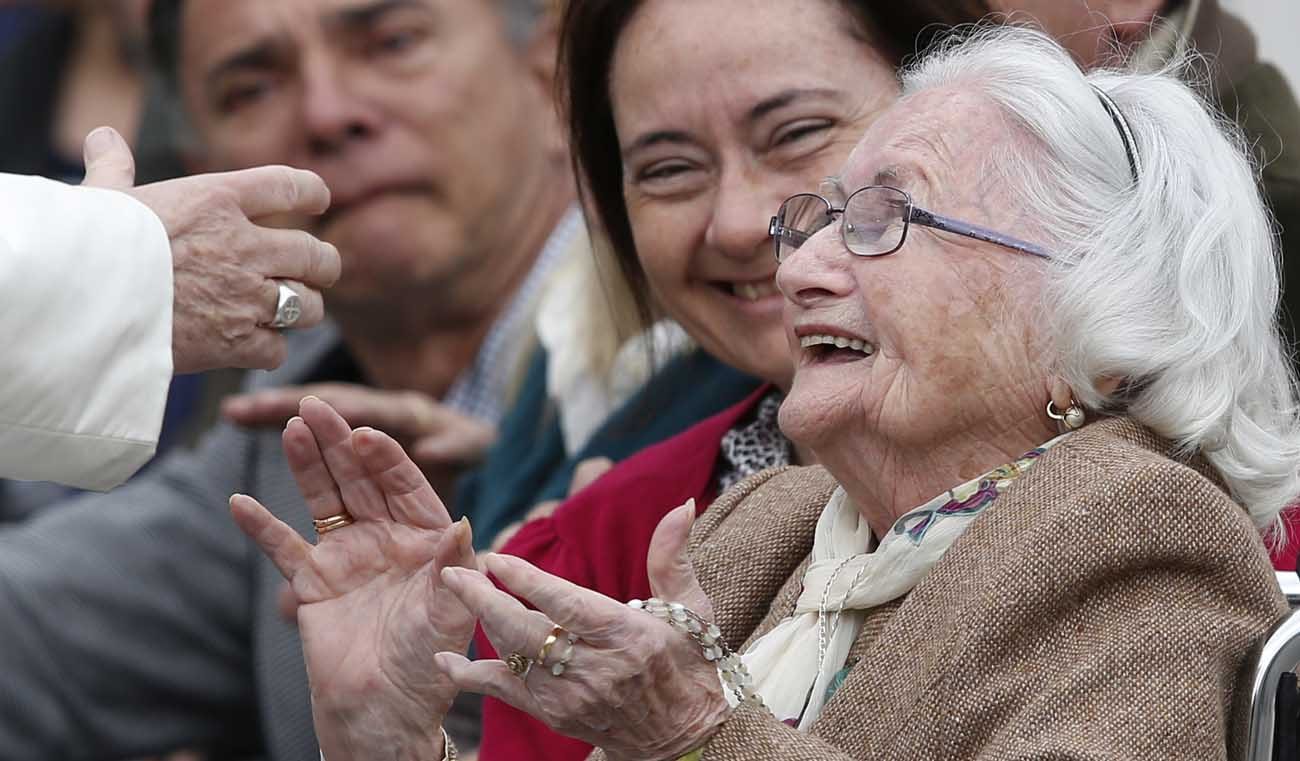 An elderly woman reacts as she meets Pope Francis during his general audience in St. Peter's Square at the Vatican March 22. (CNS photo/Paul Haring)

God “never tires of loving us” as he “takes care of us, dressing our wounds with the caress of his goodness and his mercy, meaning, he consoles us and he never tires of consoling us,” the pope said during his general audience in St. Peter’s Square March 22.

The pope also invited all Catholics to “rediscover the sacrament of reconciliation” during the Lenten season by taking part in the “24 Hours for the Lord” initiative, being held March 23-24 in many dioceses and parishes worldwide. The pope asked people to make time for confession to “experience the joyful encounter with the mercy of the father,” who welcomes and forgives everyone.

During his main audience talk, the pope continued a series of reflections on how the Apostle Paul describes the nature of Christian hope. In the apostle’s Letter to the Romans (15:1-5), he said that it is “by endurance and by the encouragement of the scriptures we might have hope.”

This endurance or perseverance, the pope said, is the patient ability to remain faithful and steadfast even when dealing with the most unbearable burdens. It is persevering even when “we would be tempted to judge unfavorably and give up on everything and everyone.”

The encouragement or consolation St. Paul talks about, the pope said, is “the grace to know how to grasp and show the presence and compassionate action of God in every situation, even in one greatly marked by disappointment and suffering.”

When St. Paul says, “We who are strong ought to put up with the failings of the weak,” he isn’t separating the Christian community into a special class of those who are “strong” and a group of “second-class citizens” who are weak, the pope said.

In actuality, the strong are those who experience and understand their fragility and know they need the support and comfort of others, he said. And when people are experiencing their fragility and vulnerability, they “can always offer a smile or hand to a brother or sister in need,” showing them strength.

It’s about people offering one another what they can and knowing that the truly strong one is Christ, who takes care of everyone. “In fact, we all need to be carried on the shoulders of the Good Shepherd and to feel surrounded by his tender and caring gaze,” Pope Francis said.

That strength to endure and find encouragement all comes from God and his sacred Scriptures, the pope said, not from one’s own efforts.

The closer people are to God with prayer and reading the Bible, the more they will have the energy and feel the responsibility to go to those in need, “to console them and give them strength.”

The aim of serving others then will not be to feel proud of oneself, he said, but to “please our neighbor for the good, for building up,” as the Apostle Paul says.

People will realize they are “a ‘channel for broadcasting’ the Lord’s gifts and, in that way, concretely become a sower of hope,” the pope said.

Planting seeds of hope “is needed today. It’s not easy,” Pope Francis said. But with Christ at the center of one’s life, it will be him who “gives us the strength, the patience, the hope and the consolation” needed to live in harmony.

At the end of the general audience, the pope highlighted that the day also marked World Water Day, established by the United Nations 25 years ago.

The pope greeted participants attending the conference, “Watershed: Replenishing Water Values for a Thirsty World,” sponsored by the Pontifical Council for Culture and the Club of Rome March 22.

He said he was “happy this meeting is taking place” as part of continued joint efforts to raise awareness about “the need to protect water as a treasure belonging to everyone.”