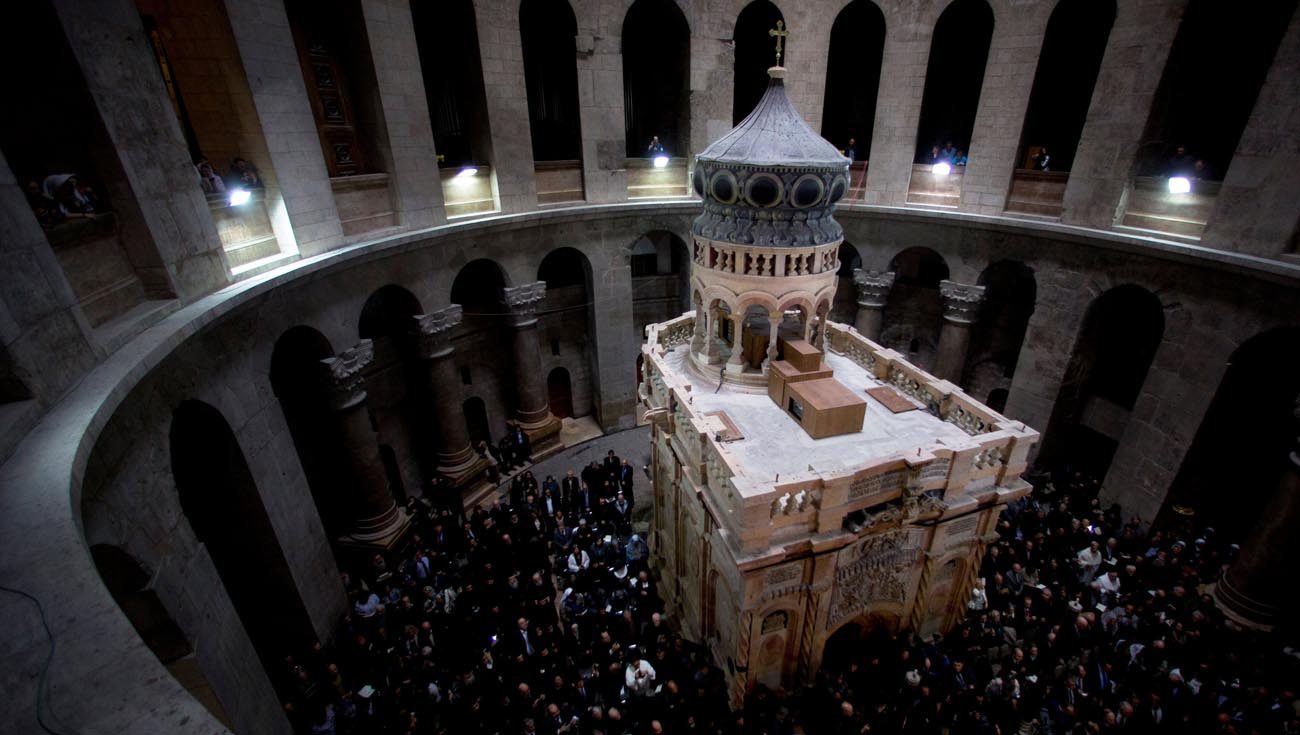 The restored Edicule is seen during a ceremony marking the end of restoration work on the site of Jesus's tomb at the Church of the Holy Sepulcher March 22. (CNS photo/Sebastian Scheiner, Reuters)

JERUSALEM (CNS) — Less than a year after restoration work began, the Edicule — the traditional site of Jesus’ burial and resurrection — was inaugurated in an ecumenical ceremony led by representatives of the Roman Catholic, Greek Orthodox, and Armenian churches, including Ecumenical Patriarch Bartholomew of Constantinople.

The 200-year-old structure was rehabilitated for the first time after Israeli authorities deemed it unsafe and leaders from the three churches that share custody of the Church of the Holy Sepulcher came to an agreement for the work to proceed.

Some did not believe the churches could overcome their centuries-old disagreements, but the project was a sign that “with God, nothing is impossible,” Archbishop Pierbattista Pizzaballa, apostolic administrator of the Latin Patriarchate of Jerusalem, said at the March 22 ceremony.

“This apparent mission impossible became possible because we allowed God to enlighten our thoughts and our eyes and our relations. Things do not change by themselves. If we are here for this celebration, it is because the different churches and leaders were able to hear the voice of God and understand and realize and accept that it was time to build new relations between us of trust and respect,” he said.

Franciscan Father Francesco Patton, custos of the Holy Land, said it was “providential coincidence” that this year, as the Edicule is restored, all the Christian denominations celebrate Easter on the same date. It was also fitting, he said, that it was around the Church of the Holy Sepulcher that the churches regained a closer relationship.

Armenian Patriarch Nourhan Manougian took the opportunity to mention the three other denominations with a presence in the church — the Assyrian Orthodox, the Ethiopian Orthodox and the Coptic Orthodox. He asked that the Anglican and Russian Orthodox churches be allowed to offering their holy liturgy at the Edicule once a year, after Easter.

“We must pray earnestly to Jesus Christ to give us the wisdom to be able to absorb literally between ourselves his greatest commandment of love,” said the patriarch. “We have no difference in regard to this commandment and, unless we accept his commandment and express it in our lives and deeds, how can we consider ourselves Jesus’ disciples?”

Several hundred local faithful, pilgrims and international dignitaries filled the main area of the basilica where the Edicule is located, taking pictures and videos of the pink-stoned structure. The metal girders that British Mandate authorities added in 1947 to keep it standing have been removed.

“It is a very exciting day which hasn’t happened in hundreds of years. It is a very big step, we are all united in celebration,” said Marlen Mauge, 53, a Catholic from Jerusalem. “We would like to have more than one united celebration. It is a good message to the world.”

Antonia Moropoulou, a professor at the National Technical University of Athens, directed the work at the site.

NEXT: Nairobi Catholics deliver aid to citizens in drought areas