An empty tomb and a bodily resurrection: why it matters 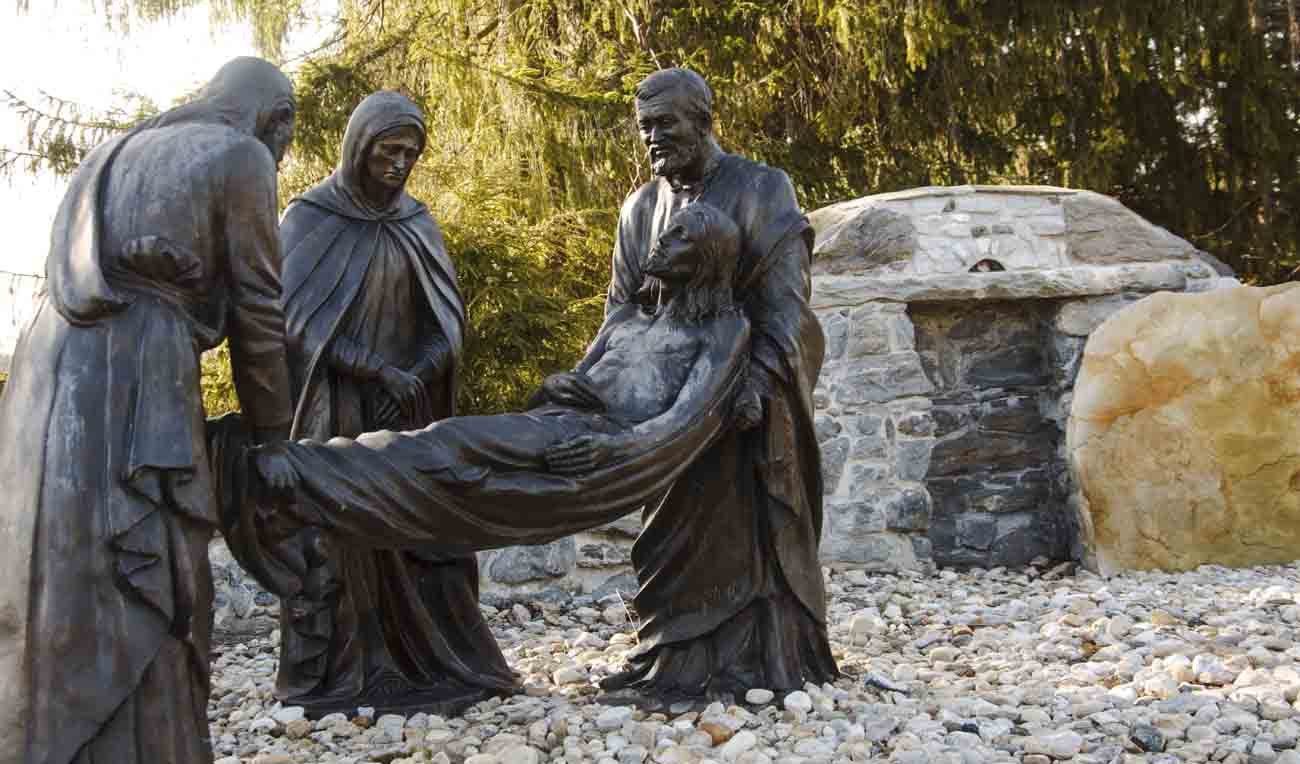 A life-size depiction of Jesus being laid in the tomb is seen April 9 in the Stations of the Cross on the grounds of the National Shrine of the Divine Mercy in Stockbridge, Mass. (CNS photo/Octavio Duran)

WASHINGTON (CNS) — Catholics and other Christians have grown up believing in the Resurrection, but the Apostles themselves were among the first who were skeptical that Jesus arose from the dead.

They didn’t believe it at first when they were told by the women who had come to anoint the crucified Jesus’ body but instead found an empty tomb.

“To be fair, you can say the men didn’t believe the women, but who could believe that story? Let’s be fair to the men. They would have to see for themselves,” said James Papandrea, a Catholic who is associate professor of church history at Garrett-Evangelical Theological Seminary in the Chicago suburb of Evanston, Illinois.

“I think anyone would want to see for themselves. We believe what we see, we believe our senses, and it’s only natural that if somebody says the Lord is alive and you knew he was dead, you’d say, ‘Show me.’ The disciples, even after all of Jesus’ teachings and all his hints about death and resurrection, they seem not to have expected him to rise from the dead. They automatically went into skeptic mode. We have Peter and John running to the empty tomb, to see that it’s empty,” Papandrea said.

“For believers, the significance of the tomb is that when Christians were talking about the Resurrection, they weren’t just claiming Jesus’ soul went to heaven. Or that Jesus lives on in our heart,” said Brant Pitre, a Scripture professor at Notre Dame Seminary in New Orleans. “They’re saying something happened to Jesus’ corpse, Jesus’ body. That’s the other essential story of the Resurrection.”

Some skeptics, Pitre told Catholic News Service in an April 11 telephone interview, talk about the concept of life after death as being just “the immortality of Jesus’ soul. They would have said that about anybody in the Old Testament.”

That is what makes the Resurrection not just different, but unique, according to Pitre, author of “The Case for Jesus.”

“The empty tomb is a necessary condition for the Resurrection, but it’s not sufficient,” Pitre said. The other element is Jesus’ appearances to the Apostles. “They needed to see in the flesh that he was alive again in his body, but in a transformed and glorified state,” he added, citing the account in Chapter 24 of St. Luke’s Gospel in which the Apostles initially think “they saw a spirit — which shows you the Apostles believed in ghosts.” But Jesus tells them, “Look at my hands and my feet,” which had been pierced with nails when he was crucified, “for a spirit does not have flesh and bones, but I have.”

Even though the Apostles — even doubting Thomas — came to believe, it was not easy to convince others. “One of the things skeptics will say: ‘The Apostles were simple fishermen. They would believe anything, out of their simplicity,'” Pitre said.

The case even holds true for the women who found the empty tomb. “In the first century A.D., the testimony of women in a courtroom was not considered reliable,” Pitre said, adding that for more believability, “you’d want the chief priest to find the (empty) tomb.” As Papandrea told CNS, “If something is in the Gospels, it’s in there for a reason. If they were ashamed of the fact that the women were the first ones to find the tomb, they could have easily left it out.”

The Apostles at first “met with opposition, mockery and even doubt on the part of the disciples,” Pitre said. “Even as Christianity spread throughout the Roman Empire, the Resurrection was one of the stumbling blocks,” he added, noting that St. Paul preaching about Christ in Athens to the Greeks had his audience “until he says Christ was raised from the dead. They mock him. It’s impossible; even ancient people knew that dead people stayed dead.”

“Many of us have the advantage where it’s normal to believe in the Resurrection,” said Papandrea, whose books include “Handed Down: The Catholic Faith of the Early Christians.” “We grew up and our parents believed it, and why wouldn’t we?”

He added that popular culture now holds up many Christ figures. “If you watch the superhero movies, they make liberal use of Christian themes, death and resurrection. These themes recur, but they also use themes from Greek and Roman mythology, Nordic mythology, as if they have equal cultural value. A lot of people treat the story of the Passion and Resurrection of Christ as just one more myth.”

The real difference about Jesus and superheroes, according to Papandrea, is that “the resurrection of Christ is not something that happened on top of Mount Olympus before time, but God broke into time.”

The bromide that “you can’t have Easter Sunday without Good Friday” is true as far as it goes, but “it would be just as valid to wear a little gold empty tomb around your neck,” Papandrea said, noting how Protestants tend to wear a cross rather than a crucifix “because they know Jesus didn’t stay on the cross. Both make perfect theological sense.”