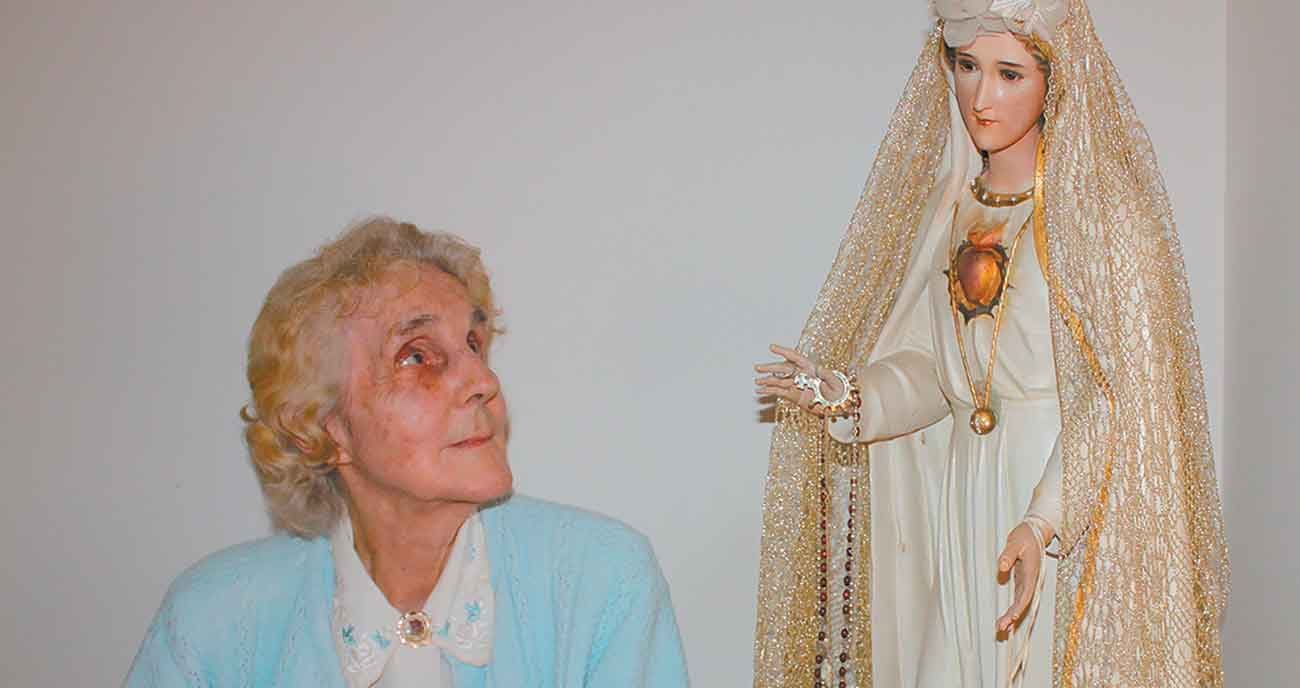 Natalie Martha Loya, pictured in an undated photo, gazes at a statue of Our Lady of Fatima that crisscrossed the country with her during her 35-year apostolate of spreading the Fatima message. Loya, a Byzantine Catholic who lives in the Eparchy of Parma, Ohio, received the statue from her father, the late Father John Loya, who purchased it for her at a gift shop in Fatima, Portugal. (CNS photo/Laura Leraci, Horizons Newspaper)

CHICAGO (CNS) — Natalie Martha Loya sits in the front pew of the Byzantine Catholic Cathedral of St. John the Baptist in Parma, Ohio, every Sunday morning.

Quiet and unassuming, the 91-year-old makes her way to her seat for the liturgy, slowly up the center aisle with her well-worn walker. Few of her fellow parishioners know this now frail-looking woman once crisscrossed the continent, sometimes through harrowing storms, as an intrepid messenger of Mary.

During this centennial of the Marian apparitions in Fatima, Portugal, Loya remains fervent about the message Mary imparted there. It is a message Martha has shared with tens of thousands of listeners in years past: Mary wants people to return to God.

“She is waiting for the people to fulfill her petitions,” Loya said in an interview with Horizons, the newspaper of the Byzantine Catholic Eparchy of Parma.

This year marks the centenary of Mary appearing to three children in a field near Fatima, north of Lisbon. She appeared six times. The first time was May 13, 1917, as they pastured their sheep. Her last appearance to the children was Oct. 13, 1917.

Mary urged the conversion of sinners, called for devotion to herself under the title of her Immaculate Heart and asked that the people of Russia be consecrated to her under the title.

A trailblazer for her time, she graduated with a bachelor’s degree from Seton Hill College in Greensburg, Pennsylvania, in 1948, with a major in chemistry, a field then dominated by men, and began as an analytical chemist at Republic Steel Corp. in Cleveland that fall. In 1951, she moved on to Ferro Corp., where she operated an industrial X-ray unit.

However, she left her position the next year to follow her family to St. Mary Parish in Whiting, Indiana, where her father had been assigned, to help care for her ailing mother. Her mother died only three months later and Loya left a career in industry to care for her father and to assist him in his ministry full time. She followed him again when he was transferred to St. Nicholas Parish in Yonkers, New York, in 1953.

“It was there that my whole life changed,” she recalled. “I would check the mail for my father, and one magazine, Pastoral Life, caught my eye.”

What drew her attention was a headline about the Blue Army, popularized by the World Apostolate of Fatima, that said, “God’s Blue Answer to the Reds,” and a pilgrimage to the major Marian shrines in Europe for the centennial of Blessed Pius IX establishing as a dogma of the Catholic faith the Immaculate Conception, that Mary was conceived without sin.

She and her father made the six-week pilgrimage, which included the Sanctuary of Our Lady of Fatima.

“I took a little camera with me. My brother-in-law instructed me on how to use it,” she said.

Upon her return, dozens of parishioners from her church and from nearby Latin-rite Catholic parishes gathered for her slide presentation on the pilgrimage.

“Before I knew it, the news got out that I was lecturing on Our Lady of Fatima’s peace plan from heaven and I would be available,” she said.

She never promoted or officially named her traveling apostolate but it became full time almost immediately, solely by word of mouth. Not many people knew about Mary’s message at Fatima back then and fewer still were giving such presentations, she said.

“I would distribute rosaries and scapulars at every talk. I would order them by the thousands. Sometimes they would give me a $20 bill and it would cover all of my expenses and my travels,” she said. “I never worried about it. I had a roof over my head and my dad was taking care of me and I didn’t have to worry about meals or anything like that.”

“I would go to everyone that would call if I could fit it into the schedule, that would include parishes, nursing homes, seminaries, high schools, grade schools,” she said. “I would fly or go by train or I drove.”

Everywhere she went, Loya stressed Mary’s key message: People must return to God, and the pope, along with the bishops of the world, must consecrate Russia to the Immaculate Heart of Mary. In so doing, Mary promised to take the peace of the world into her hands.

“But it has not been done the way Our Lady wanted it to be done,” she told Horizons.

Loya said she has no idea of how many people with whom she has shared Mary’s message at Fatima. “I must have spoken to at least 250,000 school children,” she said.

She recalled her visit at the maximum-security Sing Sing Correctional Facility Prison in Ossining, New York, in 1977, as among her most memorable.

Unsure of how to begin, she opened with words once spoken by Archbishop Fulton J. Sheen: “We are all sinners.” She continued: “I’m going to tell you about a very important message I learned about in 1954, and I would hope that you would take it to heart because you are very important to Our Lord.”

When she finished, a few inmates asked her to return, and all of the leaflets, scapulars and rosaries she had brought were gone.

Loya and her father also began the Byzantine branch of the Blue Army, which received official approval from Bishop Nicholas T. Elko, then-bishop of the Byzantine Catholic exarchate of the United States, Feb. 28, 1956. He also appointed her father to serve as its chaplain, a role he held until his death in 1970.

She retired from her apostolate in 1990 because of poor health, and dedicated her days to prayer ministry. A lifelong single laywoman, she moved to Cleveland from Yonkers to be closer to family in 2003.

In this centennial year of Fatima, 63 years after her first visit of 18 to the shrine, Loya said she wants her fellow Byzantine Catholics to understand “exactly what (Mary) said: We must say the rosary. … We must wear the brown scapular, allow our country to be consecrated to the Immaculate Heart … promote devotion to the Immaculate Heart of Mary.”

“Our Lady didn’t specify that you have to be Roman Catholic to pray the rosary. The rosary is the life history of Our Lord and Blessed Mother in miniature,” she explained. “If people would listen to Our Lady, she would take care of anything else.”

PREVIOUS: U.S. Catholics urged to use Passion as motivation to ‘change the world’

NEXT: An empty tomb and a bodily resurrection: why it matters