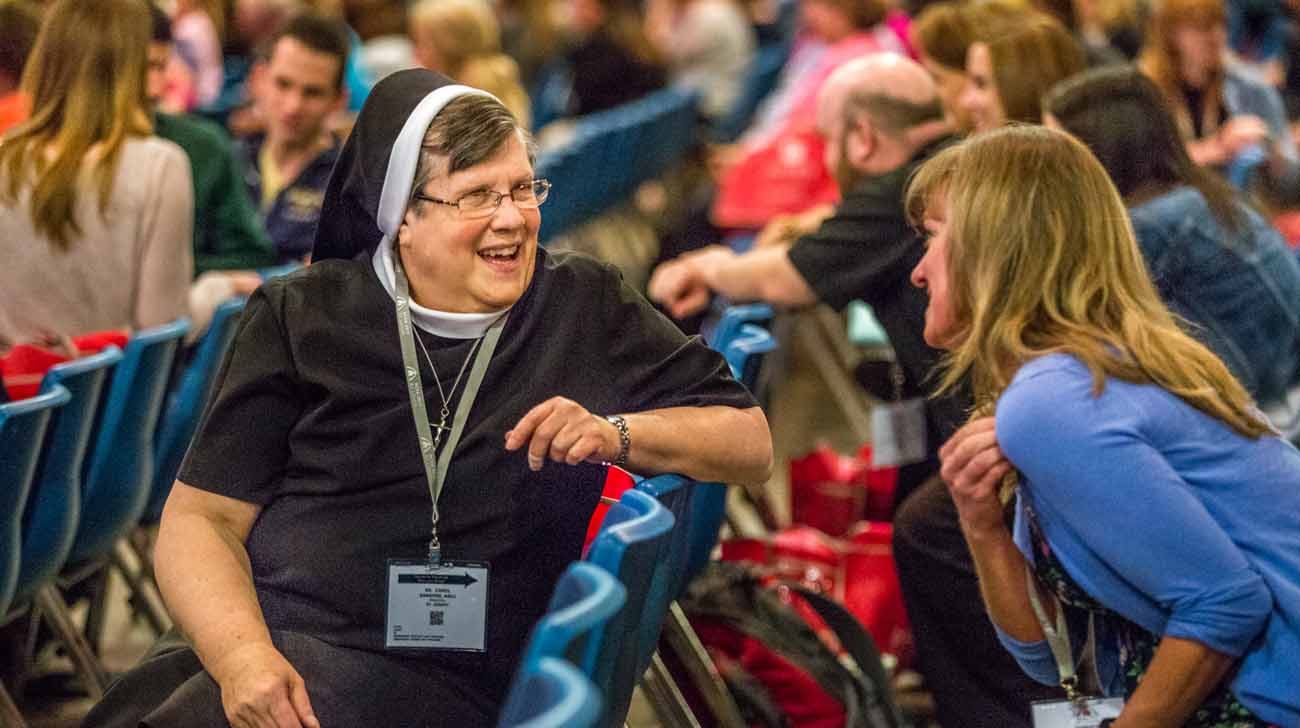 Sister Carol Sansone, a member of the Apostles of the Sacred Heart of Jesus, who is principal at St. Joseph School in Imperial, Mo., speaks with another attendee April 18 at the National Catholic Educational Association's Convention & Expo at the America's Center in St. Louis. (CNS photo/Lisa Johnston, St. Louis Review) 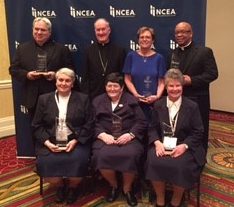 ST. LOUIS (CNS) — More than 8,000 Catholic educators attended the April 18-20 National Catholic Educational Association Convention in St. Louis this year and many of them picked up ideas during the gathering to use in their own schools.

Sister Judith Abique, a Sister of St. Paul of Chartres, plans to integrate Theology of the Body concepts in religion classes at St. Joseph School in Waipahu, Hawaii, where she is vice principal and religion coordinator.

She attended a workshop that she said gave “really good insights” on St. John Paul II’s encyclical on an integrated vision of the human person.

Shelly Jensen, a learning consultant at Immaculate Conception School in Union, Missouri, said she appreciated the many sessions for special education teachers and said she was pleased to see so many people with the “same mission, goals and identity for Catholic education.”

Cecil Bongato, a teacher at Mercy Heights Nursery and Kindergarten in Guam, said the convention provided her with new resources and ways to improve teaching.

As a first-time participant, she was worried the convention wouldn’t offer enough for those who teach the younger children. But that wasn’t the case. She also said she found a lot of similarities in Catholic education on the mainland U.S. and her island nation, a U.S. territory in the Pacific Ocean.

At the opening session, Thomas Burnford, president and CEO of the NCEA, said that despite enrollment challenges, “Catholic education is alive and well” and Catholic educators are committed to growing in faith and learning from each other.

“Catholic schools are places of encounter with the Lord,” he said.

Keynote speaker Jonathan Doyle, who operates an online staff formation program in Catholic identity and Catholic teaching, reminded the educators that they need Jesus’ help in their work.

During the convention, NCEA released its annual report about enrollment.

Total Catholic school student enrollment for the current academic year is 1,878,824, with 1,309,429 students in elementary and middle schools and 569,395 students in secondary schools.

The number of non-Catholics attending Catholic schools is 345,327 students, which is 18.4 percent of the total enrollment.

Kenny is a reporter for the St. Louis Review, newspaper of the Archdiocese of St. Louis.