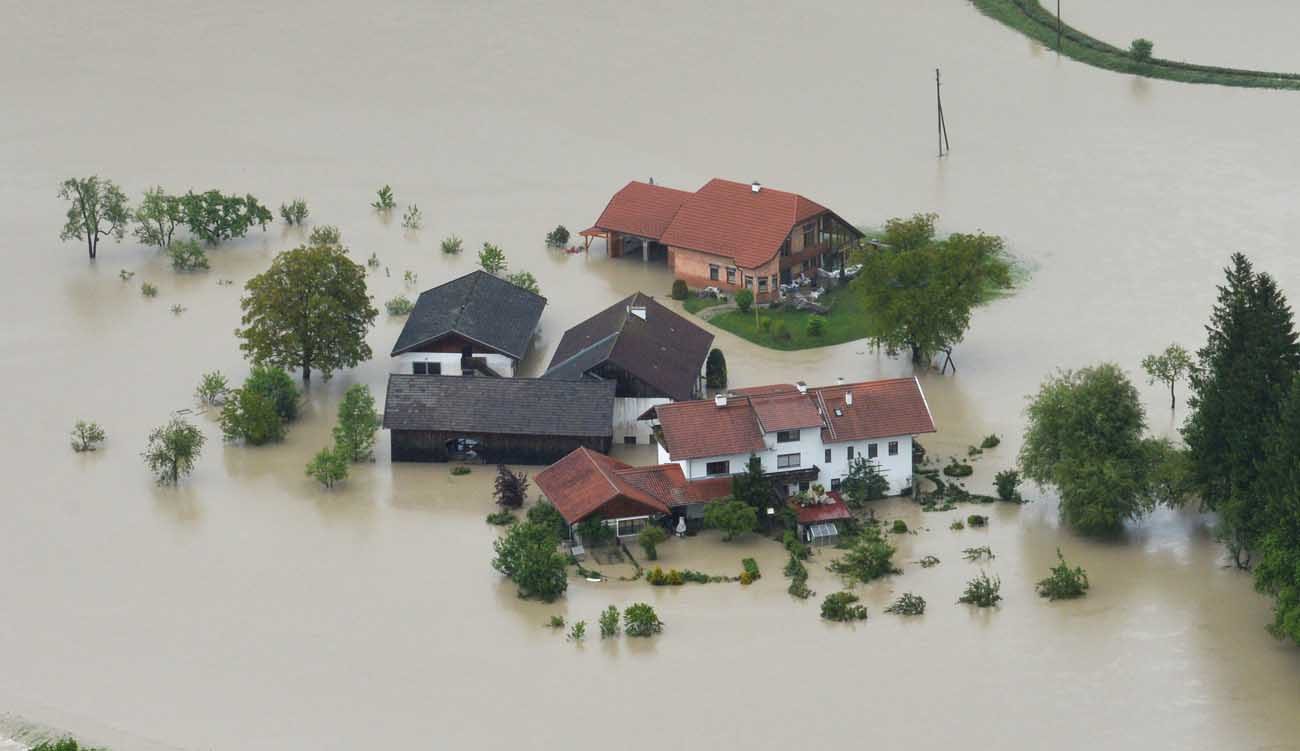 An aerial view shows houses of a farm submerged in floodwater in 2013 near Burghausen, Germany. Catholics participating in the Peoples Climate Movement march April 29 in the nation's capital will be able to pray at a Mass and visit their representatives on Capitol Hill to discuss the issue of climate change. (CNS photo/Peter Kneffel, EPA)

WASHINGTON (CNS) — Catholics participating in the Peoples Climate Movement march in the nation’s capital will be able to pray at a Mass and visit their representatives on Capitol Hill as part of two days of activities.

March organizers are expecting hundreds of thousands of people to travel to Washington April 29 in a broad showing of grass-roots support for federal government action in addressing climate change and to oppose the rollback of environmental standards by the administration of President Donald Trump.

Catholic organizations are planning to greet hundreds of Catholics as well.

The Franciscan Action Network and Interfaith Power & Light of Maryland, the District of Columbia and Northern Virginia are planning a Mass at 9 a.m. the day of the march at St. Dominic Church in Washington. Massgoers are to reconvene on the march route and walk together.

Patrick Carolan, network executive director, has served on the march’s steering committee. He said his organization has worked to ensure that the moral and spiritual values which encompass protecting God’s creation are shared as widely as the political message marchers hope to send to Congress and the White House.

“Pope Francis talked about that moral message,” Carolan said. “Every spiritual teaching talks about caring for creation and that’s what we want the message to be.”

The Catholic Climate Covenant, supported by the U.S. Conference of Catholic Bishops, has encouraged Catholics to join the march. Those coming to Washington a day ahead have been invited to learn about talking with members of Congress about climate change and protecting the environment.

“We thought that since people are coming to town anyway for the climate march, we might as well send them up to Capitol Hill,” said Dan Misleh, covenant executive director.

Covenant staff plan to brief attendees on key messages to take to Congress the morning of April 28 and send them to afternoon visits to the offices of senators and representatives. More than 100 people had signed up for the program as of April 3, Misleh said.

April 29 events do not have to be limited to Washington, Carolan added.

“For all that’s happening, we’re urging people around the country, particularly Catholics, if you can’t come to the march, to have some type of event on that day — a small prayer service, rosary gathering, discussion,” he told Catholic News Service.

As a lead-in to the march, the Global Catholic Climate Movement has led a campaign to organize events for what it is calling #Mercy2Earth Weekend. Encompassing Earth Day, April 22, and Divine Mercy Sunday, April 23, the weekend has been planned to celebrate Pope Francis’ Sept. 1 call to make care for creation a Christian act of mercy.

“Given that confluence of events, we figure we’d invite people to read the pope’s message and reflect on it and take action,” said Christina Leano, the Catholic climate movement’s associate director. “We want people to really celebrate that and see how care for creation is part of our Christian faith and spirituality and a call to act as Christians as much as it is to feed the hungry or clothe the naked.”

Hundreds of personal and group events are planned around the world for the weekend, Leano added.

Activities by individuals, parishes, schools and organizations are to include the celebration of Mass encompassing environmental themes, prayer and action for the environment, discussions of Pope Francis’ encyclical “Laudato Si’, on Care for Our Common Home” and workshops to offer practical steps on reducing energy consumption and promote recycling.

PREVIOUS: Church will do all it can ‘to end scourge of violence,’ Chicago cardinal says