Church will do all it can ‘to end scourge of violence,’ Chicago cardinal says 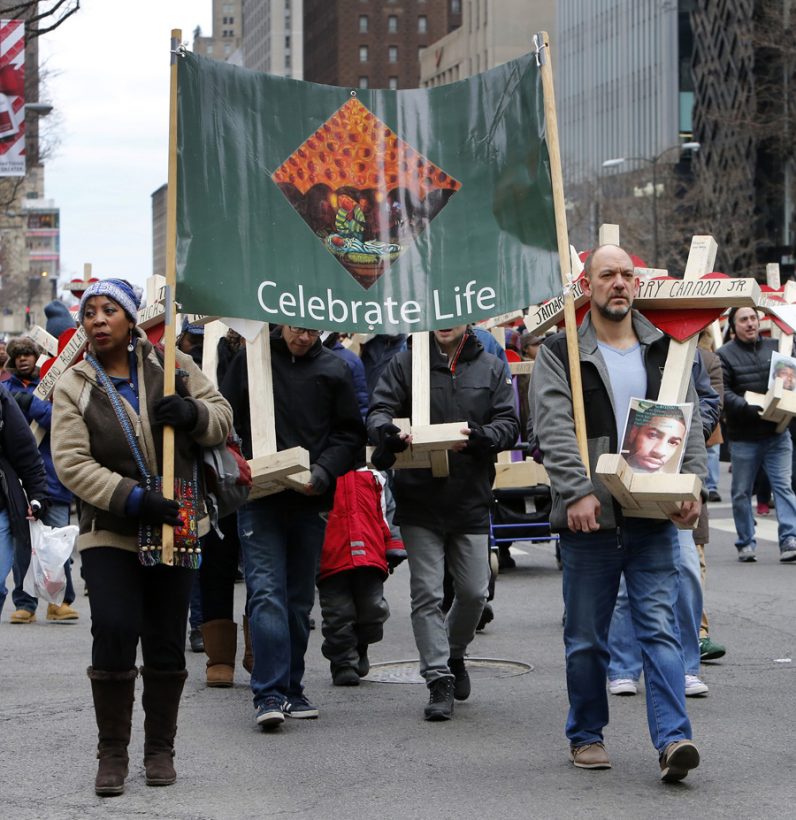 People carry a banner and crosses with names of victims of gun violence during a Dec. 31 march in downtown Chicago. Hundreds of people joined the march organized by Father Michael Pfleger, pastor of St. Sabina Parish on the city’s South Side, to remember those who died by gun violence in 2016. (CNS photo/Karen Callaway, Catholic New World)

CHICAGO (CNS) — Chicago Cardinal Blase J. Cupich April 4 announced a new initiative to increase the work of current anti-violence programs in parishes and schools and those run by Mercy Home for Boys and Girls, Catholic Charities and Kolbe House, the archdiocese’s jail ministry.

The Chicago Archdiocese also will seek out partnerships to increase programs that will help break the cycle of violence.

The cardinal announced the initiatives on the 49th anniversary of the assassination of the Rev. Martin Luther King Jr.

With a $250,000 personal donation, Cardinal Cupich said the archdiocese will create the Instruments of Peace Venture Philanthropy Fund that will provide funds for both new and existing neighborhood-based anti-violence programs. The money comes from donations he’s received to aid his personal charitable efforts.

In 2018, the archdiocese also will hold the first U.S. meeting of Scholas Occurrentes, a program active in 100 countries that brings young people together to meet and problem-solve. The gathering will involve young people from Cook and Lake counties.

The announcements came during a news conference at the Peace Corner Youth Center, which serves young people in Chicago’s violence-prone Austin neighborhood. As of April 5, 773 people were shot in Chicago in 2017 and there were 151 homicides, according to the Chicago Tribune.

Cardinal Cupich also invited people to join him on a Walk for Peace through the city’s Englewood neighborhood on Good Friday, April 14. Like Austin, Englewood is a neighborhood that sees frequent shootings and crime. During the walk, participants will take part in the Stations of the Cross and pause along the way to remember those who died by violence. Along the route, participants will read the names of those killed in Chicago since January.

The cardinal said he shared these plans with Pope Francis when he met him in Rome recently. Pope Francis was moved by the news and drafted a letter to the people of Chicago, which the cardinal read at the news conference.

“I assure you of my support for the commitment you and many other local leaders are making to promote nonviolence as a way of life and a path to people in Chicago,” the letter stated.

The pope said he will be praying for those who will participate in the Good Friday walk.

“As I make my own Way of the Cross in Rome that day, I will accompany you in prayer, as well as all those who walk with you and who have suffered violence in the city,” the letter said.

Cardinal Cupich’s announcement of new initiatives follows a yearlong process he initiated to learn about the scope of anti-violence programs already going on in the archdiocese.

While no program will completely eradicate violence from the city, the cardinal said, “just because we can’t do everything doesn’t mean we shouldn’t do something. It’s going to take one person at a time.”

During his process of learning about the efforts in the archdiocese, Cardinal Cupich said he heard of many ways parishes and groups want to respond but lack the funding to do more. The Instruments of Peace Venture Philanthropy Fund is for them.

“I see this as seed money for these local initiatives,” he said. “There really is no niche fund to support their efforts.”

He stressed the need for partnerships in these efforts.

“I can’t do it alone. I need the help of others,” Cardinal Cupich said.

Father Scott Donahue, executive director of Mercy Home for Boys and Girls, also addressed reporters at the news conference and announced another new initiative. For 130 years, Mercy Home has cared for abused and neglected children.

Mercy Home uses the Becoming A Man and Working on Womanhood programs run by Chicago’s Youth Guidance that help at-risk youth overcome obstacles and succeed in school and life. Donahue announced that the archdiocese will work with Youth Guidance to develop similar parish-based programs for youth.

“The only way to break this cycle of violence is by reaching out and saving one life at a time,” Father Donahue said. “They (the youth) cannot reject violence if that is the only thing they know.”

“These kids are not born bad,” he said. “They are kids who didn’t see another path forward.”