Diaconate directors hear how Christian unity will come by hearing others 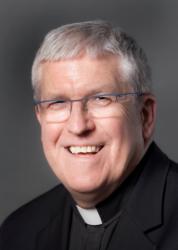 COLUMBUS, Ohio (CNS) — Catholics and those of other Christian faith traditions will come closer as they get better at practicing “holy indifference,” said the priest who directed the U.S. bishops’ interfaith relations activities for five years until his retirement last year.

Salesian Father John Crossin, speaking during the opening day of the three-day annual convention of the National Association of Diaconate Directors April 26, said holy indifference is a term used by his order differently from what most people might think when they hear the phrase.

“It means getting to the point where we are able to see in depth what those who may disagree with us are saying,” said Father Crossin, who was executive director of the U.S. Conference of Catholic Bishops’ Secretariat for Ecumenical and Interreligious Affairs from 2011 to 2016.

“This involves taking the positions and arguments of differing points of view into prayer. The goal is for each person to become ‘indifferent’ enough to hear deeply what those whose positions differ from yours are saying. It can be very hard to get beyond our own strongly held positions and emotional commitments,” Father Crossin told 100 directors of diaconate programs from dioceses throughout the U.S. and Canada.

“People have to be willing to think ‘Maybe what the other person is saying is right, or at least somewhat right. I may not completely agree with another point of view, but I realize it’s not an unreasonable one. Others may be speaking God’s word to me,'” he said. “The group consensus may be to go in another direction than I prefer. This method differs from American politics considerably because it calls for the virtues of patience and humility.”

Father Crossin said that in ongoing discussions concerning church unity, Catholics and people of other denominations must reach “a stage of communal discernment where everyone searches for God’s will, in contrast to ‘getting my way.’

“This will take time. Most of us, like me, are impatient and want to get things done in a hurry, but God is slow, and we need to recognize this.”

Since the Second Vatican Council 50 years ago, he said, “a lot of ground has been covered, I think more than most people expected” in efforts among Catholics and other Christian denominations to find points of unity. He cited the 2015 “Declaration on the Way,” in which the USCCB and the Evangelical Lutheran Church in America listed 32 points of agreement on church, ministry and the Eucharist, as an example.

“Scholars who had been working on this for a lifetime were surprised at how many agreements we had,” Father Crossin added. “There remain serious issues ahead, but we will keep harvesting the fruits of what we have accomplished and move forward.”

He also said the relationships that have been and are being built among the people involved in such discussions are a key to the future success of the ecumenical movement.

“Some of these relationships are occasional, when we work on projects like a river cleanup together and bump into each other every year. Others are more professional, when we participate in formal theological dialogues. This is one of the fruits of that dialogue,” Father Crossin said.

“There may be times when serious problems arise between communities or individuals, and in those cases, it’s important for people to have enough trust among them to contact each other and say ‘How can I help?’ This makes it easier to build an ecumenical community, or to keep it from being torn down,” he said.

Even if Catholics and other Christians overcome their differences and reunite, Father Crossin said, “it will take 100 years to absorb all the implications.”

“As we walk together, we will need to learn more, let go of dated knowledge, work our way through negative past experiences, and open ourselves to a deeper conversion to Christ,” Father Crossin continued. “The most important aspect of the walk toward unity is growing together toward spiritual maturity. This involves deep openness to the power of the Holy Spirit.

“As with the disciples on the road to Emmaus, Jesus is walking with us unrecognized, and we will know him in the breaking of bread. The Holy Spirit is guiding us as Jesus guided those disciples. The answers to our questions might be difficult, but we’re on the road God has put us on. The key in our walk along that road is prayer.”

PREVIOUS: Murder most foul — but now for the world to see

NEXT: Science and faith a natural fit for sisters joining climate march