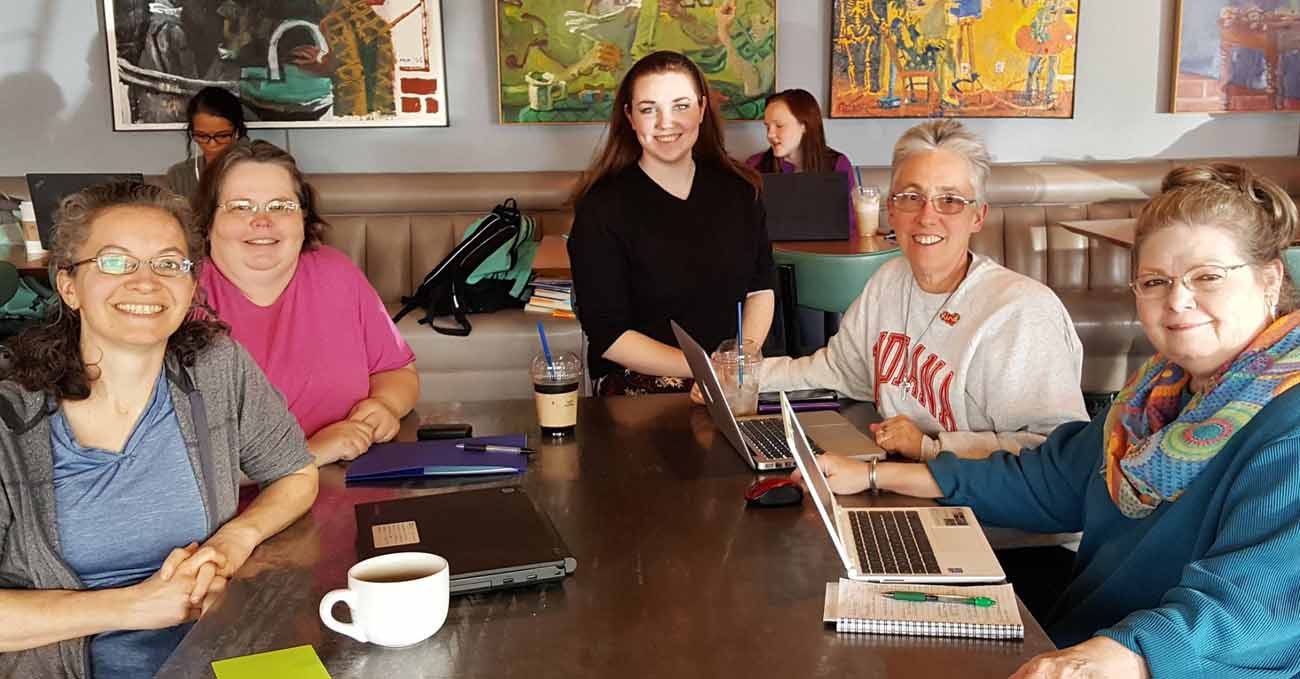 Sister Barbara Battista, a member of the Sisters of Providence of Saint Mary-of-the-Woods, Ind., second from right, participates in a planning meeting for the Wabash Valley March for Science in Terre Haute, Ind. (CNS photo/Global Sisters)

When thinking about women religious, science may not be the first idea to spring to mind. After all, faith and science are often portrayed as opposites, allegiance to one suggesting a betrayal of the other.

But for many Catholic sisters, the calculations, experiments and observations that have shaped climate study and other scientific disciplines are facts that bolster their conviction that all life on Earth is interdependent, and that the time to intervene on behalf of a struggling planet is now.

That explains why, in part, women religious, volunteers and other community associates planned to travel to Washington for the People’s Climate Movement march April 29 or already took part in the March for Science a week earlier. Many planned to participate in local marches, too.

“Science helps us understand the world around us,” said Sister Barbara Battista, a member of the Sisters of Providence of Saint Mary-of-the-Woods, Indiana. “Faith in general can help us understand that there is so much we’ll never understand about this journey in life. Science helps us get little glimpses of … the immensity and therefore the potential for life. We are all connected. … What happens to one happens to all of us.”

Long before Pope Francis embraced the science behind climate change in his 2015 encyclical “Laudato Si’, on Care for Our Common Home,” Catholic sisters were blazing trails in the hard sciences. Four nuns in the late 19th century worked with astronomers to help map the stars. In 1965, the late Sister Mary Kenneth Keller, a Sister of Charity of the Blessed Virgin Mary of Dubuque, Iowa, became the first American woman to earn a doctorate in computer science. Mercy Sister Mary Celine Fasenmyer, a mathematician famed for her work on hypergeometric functions.

Before a diagnosis of multiple sclerosis mandated a change of calling in 1971, Sister Margaret Knoeber, a member of the Adorers of the Blood of Christ in Wichita, Kansas, earned a doctorate in organic chemistry at the University of Notre Dame University and founded the chemistry department at Sacred Heart College (now Newman University).

“I believe in science and the study of science, the teaching of science, because science is a significant aspect of our lives,” said Sister Knoeber, who went on to have a long and fruitful career with the university and as a leader in her own order. “I’m not aware that Catholics I know have any difficulty with science.”

Sister Battista, who participated in a satellite science march in Wabash, Indiana, April 22, said she has been inspired by an unlikely role model: a man imprisoned by the Catholic Church for his outspoken, persistent defense of the Copernican hypothesis that Earth circles the sun.

“Galileo has been my hero within the Catholic Church for as long as I can remember,” she said. “He stood his ground against some pretty short-sighted teachings of the church that ultimately were corrected. The Catholic Church has yet to recognize the full humanity of women. To me, that’s a breakdown of biological science. To me, there should be no distinction.”

Sister Joan Baustian, a member of the Adrian Dominican Sisters in Michigan is part of a group of eight community members who planned to participate in the Washington climate march.

She grew up on a farm, but for 27 years she lived in Detroit, where part of her work was helping residents create and tend a community garden. Spurred by her concern over proposed deep cuts to the Environmental Protection Agency’s budget, Sister Baustian said she hoped the people joining the marches around the country will influence lawmakers’ decisions.

“The climate was made by God, and we’re destroying it,” she said. “If you believe what’s in the Bible, we were made stewards of this wonderful Earth, of all these resources, and we’re poisoning it.”

The Adrian Dominicans, which has made a commitment to “live simply and sustainably for the sake of the whole Earth community,” has a long history of environmental activism that includes alternative investing, interfaith alliances and physical changes to their campus and community life.

Such measures include the establishment of a permaculture site on their campus. Using social and ecological principles, permaculture is designed to imitate the relationships found in the natural world.

Permaculture philosophy involves “working with nature instead of against it,” said Holly Simmons, who works in the sisters’ Peace, Justice and Care of Creation Office through the congregation’s volunteer program. She also planned to join the march in Washington.

“This is a way for me to add my voice to people calling for positive change to environmental policies and to learn from more experienced activists,” said Sammons, who is Catholic.

The day before the climate march, Sister Maryann Agnes Mueller, justice and peace coordinator for the Felician Sisters of North America, planned to be part of a lobbying group organized by the Global Catholic Climate Movement and the Catholic Climate Covenant to meet with congressional staffers on Capitol Hill to urge support for environmental protection and climate change legislation.

Sister Mueller said she has come to understand that all things are interconnected. “How we treat the environment is a barrier to peace in the world,” she said.

Recalling a similar march in New York in 2014 before the U.N. climate summit, Sister Mueller said that she felt more hopeful then.

“It’s just different this time. There is an urgency. We need to be out in the streets and show up because of the new political climate (and) to make people aware that this is affecting the poor, refugees, everything. We’re going backwards,” Sister Mueller said.

While several women religious are attending marches because of concern about the global effects of climate change and the impact of national policy decisions, Sister Kathleen Storms, a member of the School Sisters of Notre Dame, brings the conversation back to local concerns. As a staff member at Our Lady of the Prairie Retreat, a ministry of the Congregation of the Humility of Mary in east central Iowa, Sister Storms runs the onsite 200-acre farm, which includes a bank of solar panels that generates electricity.

In the Quad Cities area, where a local climate march was take place, water quality and availability are chief concerns, she said because “much of our water is polluted by runoff from the fields.”

Sister Storms hoped for a good turnout at the local march, where she and a Benedictine sister planned to hand out chocolate spheres covered with a foil image of the Earth. She described science as an ally that backs up her faith with facts.

“I don’t see what science is telling us as any different from what our faith is telling us,” she said. “We need to care for the Earth.”

Eisenstadt Evans is a religion columnist for Lancaster Newspapers, Inc., and a freelance writer.

PREVIOUS: Diaconate directors hear how Christian unity will come by hearing others

NEXT: Society of Catholic Scientists meets in Chicago for first-ever conference