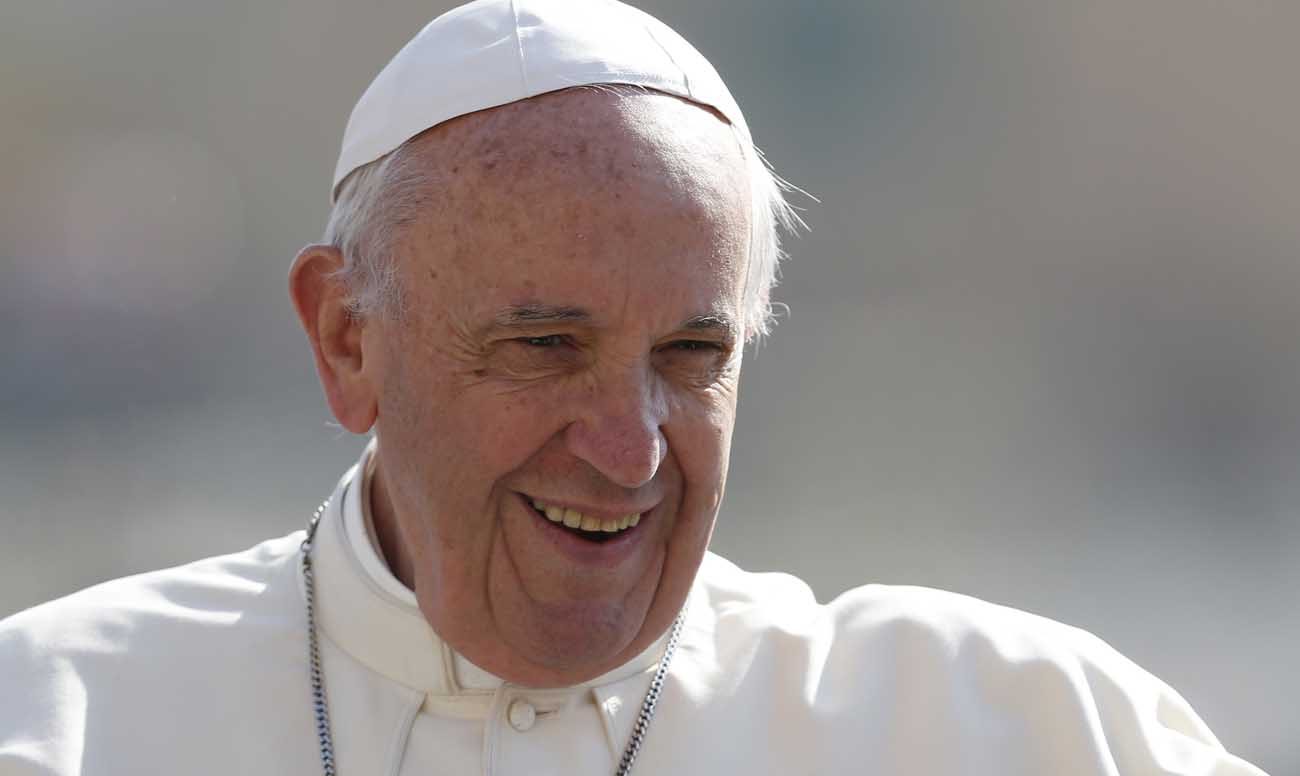 Pope Francis is pictured during his general audience in St. Peter's Square at the Vatican April 12. (CNS photo/Paul Haring)

WASHINGTON (CNS) — It has been four years since Pope Francis was elected to the papacy and Jesuits like Father Patrick J. Conroy still marvel that it happened.

“I never thought there would be a Jesuit pope, like everybody else,” said Father Conroy, during an April 5 panel hosted by Georgetown’s Initiative on Catholic Social Thought and Public Life discussing the impact his election still has on Jesuit communities in the U.S.

Father Conroy recalled telling his mother that Jesuits just aren’t the type of priests who would end up in the chair of St. Peter. But like many others, he watched in amazement March 13, 2013, as one of his spiritual brothers did just that. The Jesuit pope is real, and Father Conroy, chaplain of the U.S. House of Representatives, even game him a blessing when the pope visited the U.S. Capitol during his 2015 apostolic visit.

In “A Pope named Francis,” panelists described the Jesuit Jorge Bergoglio, who took the name of a Franciscan saint devoted to the poor, as the consummate teacher, the type of man who would prefer the company of a garbage collector to that of a head of state, an effective communicator, but also a human being who has tasted both failure and success.

Panelist Mark Shriver, the Jesuit-educated president of Save the Children Action Network, credited the pontiff with a reawakening of sorts to his own Catholic roots. He said he had found himself in “a little bit of a Catholic lull,” just before Francis came along. For a few years, the accumulation of the clergy sex abuse scandal, the financial scandal at the Vatican bank and other situations involving the church weighed on him and made him feel that it wasn’t “the Catholic Church that I thought I’d been raised in and knew and loved,” Shriver said.

And then along came the Jesuit pope, paying his own hotel bill, paying his respects to migrant refugees who had lost their lives in the waters near the Italian island of Lampedusa, giving up luxury accommodations at the Vatican, and washing the feet of women and Muslims. Shriver said he thought to himself: “Who is this guy?”

Something about him called to him. With great curiosity, he said he set out to see whether the pope’s gestures were real or were they just for show, and if they were real, what could they teach him?

He went out to find out all he could about Jorge Bergoglio, from colleagues, friends and detractors, which he documented in his book “Pilgrimage: My Search for the Real Pope Francis.” He said he found a man who, as pope, is a “great Jesuit teacher,” similar to the ones who educated him, the kind who challenges your beliefs, challenges you to the core, but leaves you with great lessons.

He’s teaching when he gets into a small Fiat, when he prefers to eat with the homeless instead of with Congress, when he invites the homeless to his birthday party, when he goes on a trip and comes back with immigrant families.

“These are all gestures with a message,” Shriver said. “He’s a great teacher and he’s a challenging teacher … he doesn’t fit in the box of conservative or liberal. He wouldn’t be a Democrat or a Republican or an Independent. He doesn’t fit in those classifications. He’s listening to his boss and his boss is Jesus.”

“You can’t fake this stuff,” said Father Conroy, adding that the pope is a great communicator and yes, he’s quite different because he grew in a different environment. While some places on earth revere Christ the king, the ruler, in South America, where Pope Francis comes from, “they worship Christ the servant. … That’s who Christ is, not the king, but a servant … I think it’s so much a part of who (Pope Francis) is, and that’s not so much (being) Jesuit,” but part of the popular Christology of the place where he comes from.

He also was a high school teacher, he said, and that’s why he knows how to talk to groups of people who don’t want to listen to him, Father Conroy said, and so he prepares a message that sticks.

He’s the kind of pope who can get young people excited about their faith, said Michelle Siemietkowski, director for graduate and undergraduate student formation at Georgetown University’s Office of Mission and Ministry.

When the announcement came that a Jesuit had been chosen as pope, the building she was in at Georgetown shook, literally, with excitement, she said, and students at the Jesuit institution began running around the school’s Washington campus with the Vatican flag.

When she asked students what the pope meant to them, one of them said that a recent World Youth Day event with Pope Francis, “marked the first time in a while that I truly felt part of the Catholic community.”

He shows young people joy, good deeds, and the importance of taking them to those into communities everyone else is ignoring, Siemietkowski said. And those are the just the sentiments of young Catholics, she said. “These are our young people. It’s phenomenal. It’s powerful and it’s palpable.”

They love his message of preaching the Gospel “in joy and deed, to live our lives in a way that shares in the evangelical nature of the church’s mission,” she said, “to do that on the margins … to go where no one else is going and taking care of the poor, taking care of the oppressed, and to do that in real and concrete ways.”

PREVIOUS: Catholics advocate on issues of importance to church at state Capitol

NEXT: Age, ethnicity examined in survey on U.S. Catholics’ views of Muslims