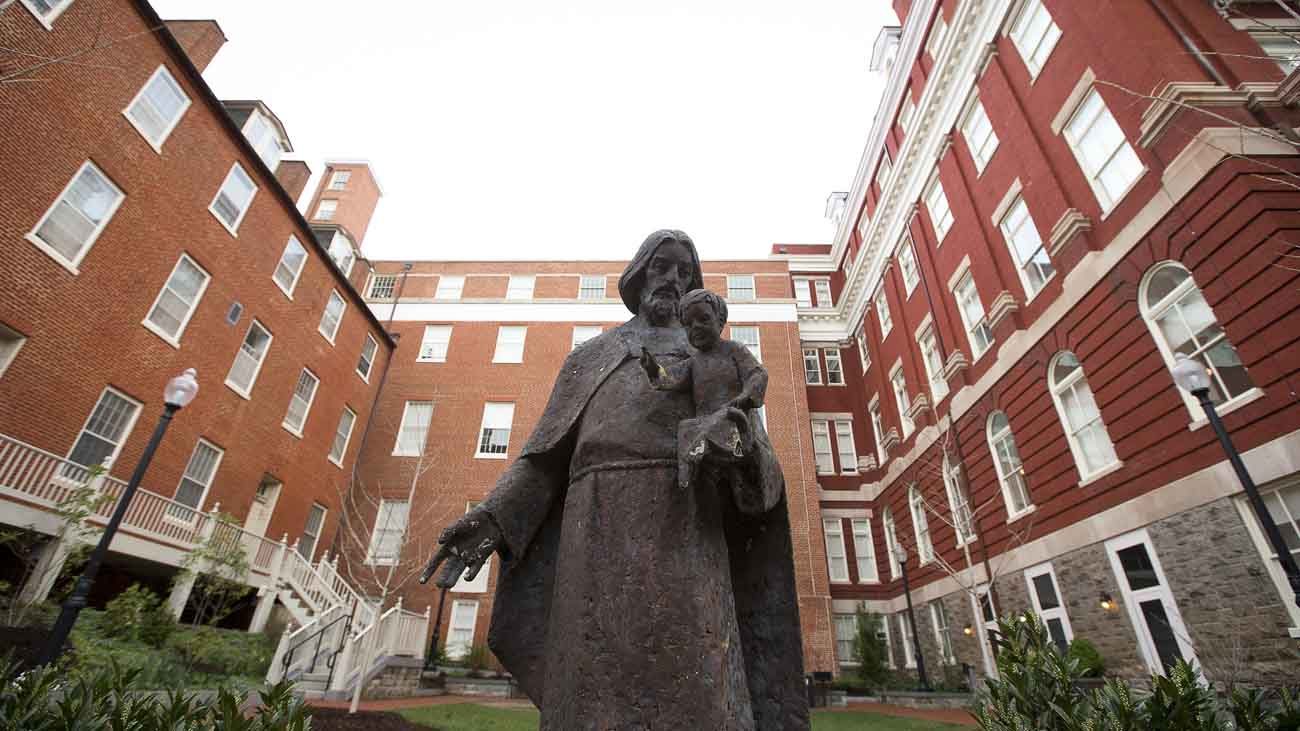 Mulledy Hall, also known as Freedom Hall, center, is seen on the campus of Georgetown University April 4. The building will be renamed after Isaac Hawkins, the first enslaved person listed in the Jesuit university's documents on its selling of slaves. (CNS photo/Tyler Orsburn)

WASHINGTON (CNS) — Georgetown University has chosen April 18 as the date to rename two buildings on campus previously named for priests who sold 272 women, children and men into slavery for financial gain in 1838.

The Jesuit university based in Washington announced that the process will begin with a spiritual ceremony honoring the slaves prior to the dedication of buildings originally named after Jesuit Father Thomas Mulledy, the Georgetown president who authorized the transaction, and Jesuit Father William McSherry, who also was involved in the 1838 sale and in other slave sales.

Mulledy Hall will be renamed after Isaac Hawkins, the first enslaved person listed in the sale documents. McSherry Hall will be named after Anne Marie Becraft, a teacher and free woman of color who established one of the first schools for black girls in the District of Columbia. She later joined the Oblate Sisters of Providence.

The event is set to take place the day after the District of Columbia marks Emancipation Day, which celebrates the emancipation of slaves in Washington April 16, 1862. This year, the local holiday was moved to April 17 because the actual day falls on Easter Sunday.

Georgetown University president John J. DeGioia, who has met with descendants of the slaves, announced last fall the renaming of the buildings as one in a series of steps that will be taken to deal with what he called “Georgetown’s participation in that disgrace,” meaning slavery. Descendants of the slaves will attend the 10 a.m. Liturgy of Remembrance, Contrition and Hope, to be celebrated by clergy of the Archdiocese of Washington and the Society of Jesus in the United States, prior to the dedication of the buildings.

University officials have met with some descendants of the slaves on various occasions and they have had access to historical materials regarding the sale of their relatives.

“There were two evils that took place,” said DeGioia in September 2016 about the transaction that brought the university out of financial ruin. “The sale of slaves and the breakup of families.”

Some of the families sold included adults and children the Jesuits had baptized. On March 12, The New York Times published a photo, the only known image, that an archivist in Thibodaux, Louisiana found of one of the slaves sold by the Jesuits. His name was Frank Campbell and the story accompanying the photo said the slave was sold out of St. Inigoes plantation in Maryland, named after St. Ignatius. He had kept ties to the Catholic Church after gaining his freedom, the story said.

Although Georgetown officials have said there is no way to undo the harm that was done, the university in 2015 formed a Working Group on Slavery, Memory and Reconciliation that included faculty, students, alumni and descendants of slaves, which suggested in 2016 that the university offer some form of reparative and meaningful financial commitment. The university said the renaming of the buildings are the beginning of a journey of reconciliation.