Historians assess the promise and paradox of JFK at his centenary 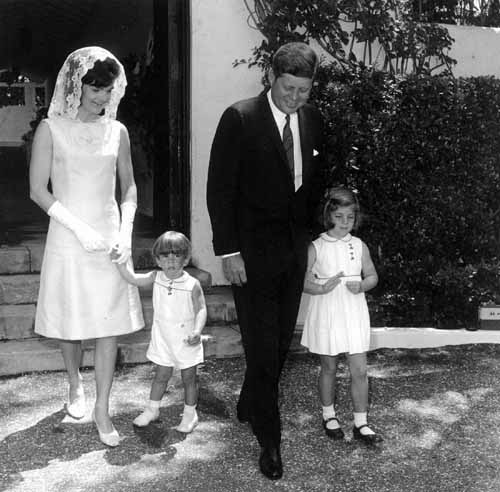 U.S. President John F. Kennedy, his wife, Jacqueline, and their children, Caroline and John Jr., are seen on Easter Sunday in 1963. Even Kennedy’s youth and “vigah” would be put to the test today, as he would have turned 100 years old on May 29, which happens to be Memorial Day this year. (CNS photo/Reuters)

WASHINGTON (CNS) — Even the youth and “vigah” of John Fitzgerald Kennedy would be put to the test today, as JFK would have turned 100 years old on May 29, which happens to be Memorial Day this year.

The centenary of Kennedy’s birth has brought fresh appraisals of Kennedy, the first — and so far, only — Catholic to attain the presidency and his assassination-truncated term of office.

“He still is a towering figure in my imagination,” said Patrick Maney, a presidential historian at Boston College, in JFK’s hometown. “It’s hard to imply why he had such a hold on people,” although he could vividly remember the details of being “this close” to Kennedy during a presidential campaign stop in Green Bay, Wisconsin.

“He was the beginning, my first hero in politics. Before that it was baseball players,” said Maney, who grew up following the Milwaukee Braves and football’s Green Bay Packers. “He played a pretty important role in my life, and still does in a way.”

“A Catholic had been a major party’s candidate only once before: Al Smith in 1928, who was crushed in the election in the midst of some pretty explicit anti-Catholic campaigning against him,” O’Toole said. “So the question for Kennedy was how not to repeat that experience.

“The turning point was generally taken to be the speech Kennedy gave to a meeting of Protestant ministers in Houston in the middle of the campaign,” O’Toole added, “in which the tagline was ‘I’m not the Catholic candidate for president. I’m the Democratic candidate for president who happens to be a Catholic.’ He had some help in writing that speech from Cardinal (Richard) Cushing, the archbishop of Boston. It might not have worked, of course, but it did. The point is he had to address the question.”

In a nail-biter election, Kennedy won, carrying 70 to 80 percent of the Catholic vote, although his opponent, then-Vice President Richard Nixon, picked up about 80 percent of the white Protestant vote. Author Shaun A. Casey, in his 2009 book “The Making of a Catholic President: Kennedy vs. Nixon 1960,” said Protestant denominations banded together to derail the JFK campaign, claiming in leaflets, newspapers, sermons and radio broadcasts that the Catholic Kennedy would take his orders from the pope. Casey suggested the cross-denominational effort ultimately brought about the birth of the Religious Right, which has tried to leave its mark on politics for the last 40 years or more.

Maney said Kennedy became the first “celebrity president,” being the son of a millionaire and being a World War II hero with his rescue of his Navy crewmen of the stricken PT 109, not to mention his quick ascendancy in Congress and his marriage to socialite Jacqueline Bouvier.

The Kennedys were regular attendees at Mass during his presidency. That image does not square with the reports of womanizing that surfaced more than a decade after his 1963 assassination (he was also the last president to die in office) — which by this time, media images of the Vietnam War had marginalized Lyndon Johnson’s presidency, and dogged reporting of the Watergate scandal had brought down JFK’s onetime rival Nixon.

Speaking of Vietnam, John McGreevy, dean of the College of Arts & Letters at the University of Notre Dame, said the debate will long continue whether Kennedy would have deepened U.S. involvement in Vietnam as Johnson had.

“His was a presidency that placed a great deal of faith in experts,” McGreevy said. “The experts got us deeper into Vietnam.” Maney said there were 200 “advisers” in Vietnam when JFK was inaugurated, but 16,000 at the time he was killed.

John Kenneth White, associate professor of political science at The Catholic University of America, who specializes in history, said Kennedy was aware of not wanting to be seen as “soft” and “weak on communism leading into a 1964 re-election campaign. JFK used a “spokes of the wheel” model of governing, listening to competing arguments by top staffers, before deciding on a course of action. As opposed to Jimmy Carter and current President Donald Trump, White noted, Kennedy made the model work.

“Kennedy always had an insatiable curiosity. He was an avid reader of newspapers. He was prone to call an assistant secretary to ask about different things he had read in the newspaper — not the Cabinet secretary,” White said.

“He also had a marvelous capacity to grow in the presidency. You saw that growth from the Bay of Pigs to the Cuban missile crisis. When it came to challenging the intelligence community, he challenged information that was given to him,” he added.

With 10 occupants of the White House since JFK, and with 23 percent of the nation Catholic, no other Catholic has been elected president. The only major-party nominee who was Catholic was John Kerry in 2004. And with the exception of Joe Biden, Catholics have been unlucky in the vice presidential sweepstakes: Republicans William Miller in 1964 and Paul Ryan in 2012, and Democrat Geraldine Ferraro in 1984.

As opposed to Protestants who blasted Kennedy for being too Catholic, Kerry “certainly was attacked for being not Catholic enough,” O’Toole said. “There were bishops who argued for denying him Communion because of his abortion stance. The sides have changed in a way.” He added, “For Catholic leaders who did criticize John Kerry for that, what they did criticize him for was following the position that Kennedy had laid out: ‘I’m not going to let the demands of my faith and the opinions of the leaders of my faith affect my policy.’ Kerry was saying the very same thing, but being criticized for it rather than being praised for it.”

White said Kennedy’s election put Catholics and Catholicism in the mainstream of U.S. society and politics. McGreevy said another influence on the American body politic was the Second Vatican Council. “Low-level religious tension get reshaped in the Second Vatican Council,” he added. “We used to be told, ‘Never go into a Protestant church. That could be a mortal sin.’ The juxtaposition of Kennedy’s election and Vatican II, they happened at the same time, and it accelerated the pace of change.”

NEXT: Catholic leaders warn against changes to health care bill