Cardinal Dolan slams DNC pledge to back only pro-abortion pols 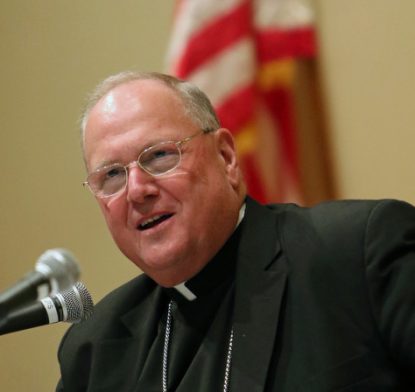 The cardinal, who is chairman of the U.S. Conference of Catholic Bishops’ Committee on Pro-Life Activities, urged members of the Democratic party to “challenge their leadership to recant this intolerant position.”

The cardinal’s April 26 statement was in reaction to recent comments by DNC chair Tom Perez who said: “Every Democrat, like every American, should support a woman’s right to make her own choices about her body and her health. That is not negotiable and should not change city by city or state by state.”

Perez went on to say in an April 21 statement: “At a time when women’s rights are under assault from the White House, the Republican Congress, and in states across the country, we must speak up for this principle as loudly as ever and with one voice.”

Perez’s statement came after a DNC “unity tour” rally in Nebraska, where another DNC leader and Sen. Bernie Sanders, I-Vermont, appeared April 20 with a former state senator, Heath Mello, the Democratic mayoral candidate in Omaha. The DNC tour was sharply criticized by pro-abortion groups for joining forces with Mello, who sponsored a 2009 state Senate bill requiring that women be informed of their right to request a fetal ultrasound before having an abortion.

“The actions today by the DNC to embrace and support a candidate for office who will strip women — one of the most critical constituencies for the party — of our basic rights and freedom is not only disappointing, it is politically stupid,” NARAL Pro-Choice America President Ilyse Hogue said in an April 20 statement.

Sanders responded to the criticism by saying different views on abortion within the party were natural. Perez took this a step further saying he fundamentally disagreed with “Mello’s personal beliefs about women’s reproductive health.”

Kristen Day, executive director of Democrats for Life of America, posted a statement on the organization’s Facebook page April 26 saying it was “ridiculous” that Perez told “one-third of Democratic voters that they must abandon a very legitimate, very serious, moral and ethical conviction about human life.”

People who oppose the legal right to abortion “do so because it stops a human heartbeat and violates the right to life,” she wrote. “Anyone who truly believes that” will not “just stand by and not act.”

She likened opposition to abortion as opposing human trafficking or sex slavery.

“Democrats have to stop pretending like this isn’t a big deal to people,” Day said. “It’s a very big deal.”

On NBC’s “Meet the Press” April 23, House Minority Leader Nancy Pelosi, D-California, was asked if a Democratic politician could be pro-life.

“Of course,” she said, adding that she has “served many years in Congress with members who have not shared my very positive — my family would say aggressive — position on promoting a woman’s right to choose.”

Cardinal Dolan, who offered prayers at the Democratic and Republican national conventions in 2012, had strong words for the Democratic party in his April 26 statement, saying the party’s “platform already endorses abortion throughout the nine months of pregnancy, even forcing taxpayers to fund it; and now the DNC says that to be a Democrat — indeed to be an American — requires supporting that extreme agenda.”

NEXT: Historians assess the promise and paradox of JFK at his centenary