Kentucky farm rooted in mission of Dominican Sisters of Peace 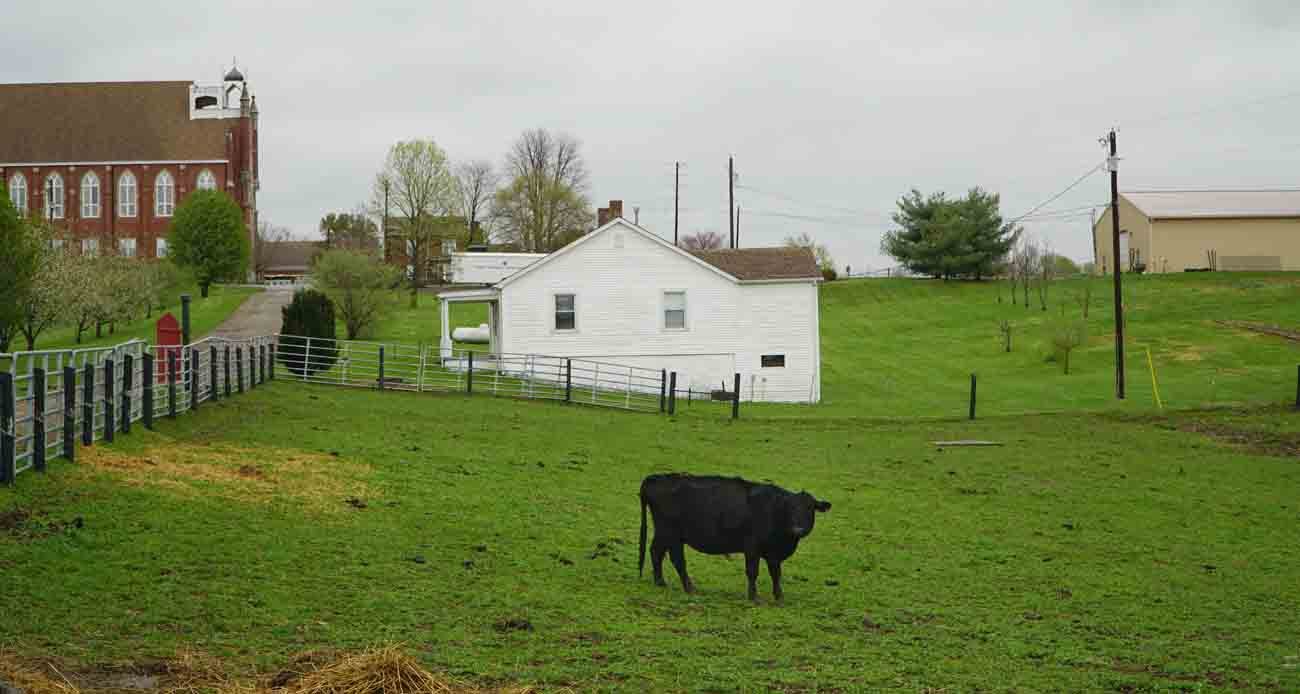 A cow grazes in a pasture on St. Catharine Farm April 6 in Kentucky near the motherhouse of the Dominican Sisters of Peace at left. (CNS photo/Jessica Able, The Record)

ST. CATHARINE, Ky. (CNS) — The land surrounding the Dominican Sisters of Peace motherhouse has been farmed since 1822.

In the beginning, the sisters farmed the verdant hills to feed the community and the students they taught.

Today, the farm is tended by a farm manager and a part-time farmhand who primarily raise beef cattle.

The heart of the farm’s mission is to promote sustainable farming practices and provide quality beef for the sisters and consumers alike, said Danny Spalding, farm manager.

“We’ve done a whole lot to humanely raise cattle, in how we feed them, how they are handled and the general welfare of the cattle,” he said. “People want to know where their food comes from.”

The farm is situated on 650 acres of picturesque countryside of gently rolling hills a short walk downhill from the Dominican motherhouse.

Hay and corn raised on the farm feed the cattle. Two lakes, wetlands and a forest with a creek running through it also are on the property.

Spalding said beef sales are “running very strong.” Last year, the farm sold about 90 steer. At about 1,250 pounds per animal, the yield was more than 100,000 pounds of beef, he said.

The biggest market is for the grain-fed beef. Grass-fed beef, he said, is a growing market. All of the beef is free of antibiotics, steroids and hormones.

About half of the sales are in the area around nearby Springfield, Kentucky, while the remaining sales come from the wider region, including Louisville, Lexington, Elizabethtown, Fort Knox and Danville. Sales of grass-fed beef in particular have expanded into Tennessee, Spalding said.

The farm also sells pork, which is raised by Amish farmers in Casey County, Kentucky. Spalding estimated the farm sold about 50 to 60 hogs last year.

Though the farm’s main focus is beef, it has undertaken other initiatives. In 2009, farmworkers installed four beehives. And in 2013, workers planted an orchard of peach, apple and pear trees. The fruits of that effort should be ready for use next year, Spalding said.

A note of pride is evident in Spalding’s voice when he discusses the farm and its sustainable practices. Spalding, who has worked the farm since 1983, said crops and grazing areas are rotated in an attempt to prevent soil depletion.

“We want to make sure people know the cattle are not locked up in a barn; they are able to roam the hillside,” said Spalding, a parishioner of St. Rose Church in Springfield.

Dominican Sister of Peace Charlene Moser, who serves as a liaison between the sisters and the farm, said the community embraces sustainable practices not only to provide a desirable product but also to preserve and care for the land.

“The idea is not to extract as much as possible but to care for it. Pope Francis talks about this in “Laudato Si'” — that humans should have respect for the land and to use the gifts we’ve be given to care for it,” she said, citing the pope’s 2015 encyclical on the environment.

Sister Moser said the farm also taps the roots of the sisters’ mission.

“The congregation began as a teaching community and we see the farm as a means of fulfilling the teaching mission,” she said.

The farm collaborates with a number of local and state organizations to promote sustainable practices and to educate the public about proper soil and water management. The farm usually hosts a field day in the summer, where the public is invited to tour and learn about its operation.

Susan McCain, who chairs the St. Catharine Farm Advisory Council, said the farm and its practices align with the overall ministry of the congregation.

“We are not like other farms,” she said. “The farm’s profitability is important for viability and continuity, but its mission, vision and commitment to the sustainability of God’s creation is its driving force.”