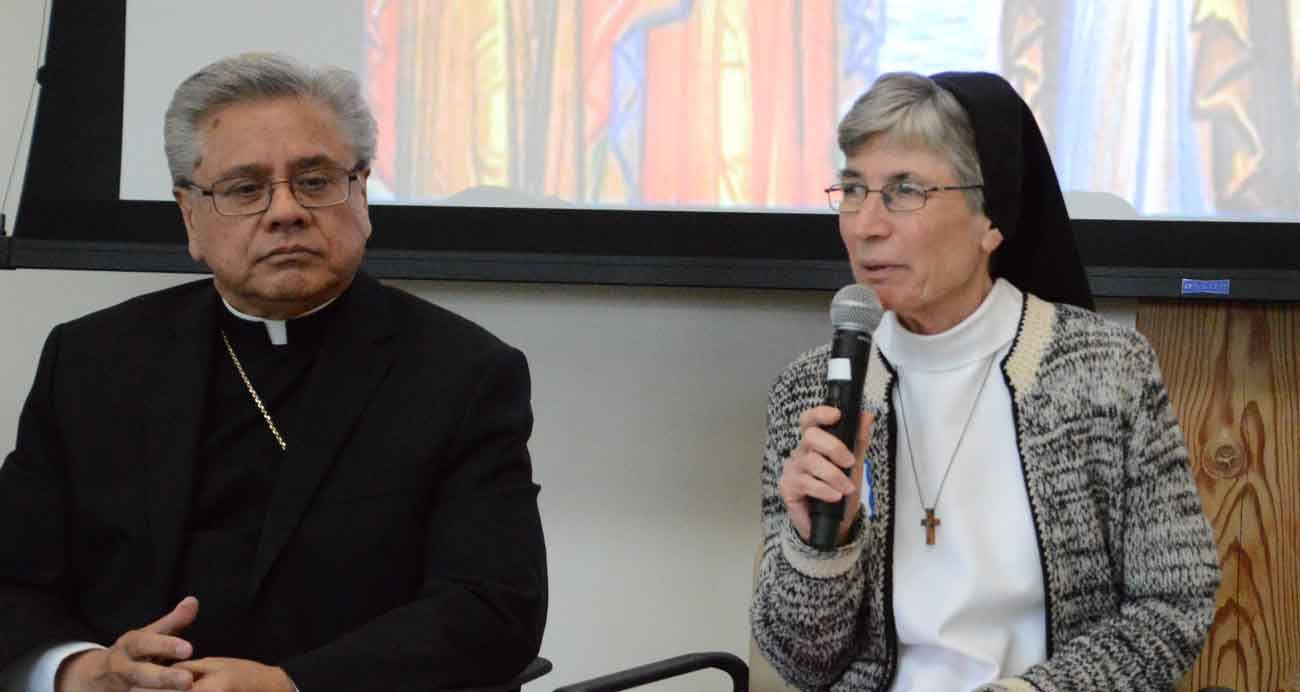 FREMONT, Calif. (CNS) — Almost a year ago, Pope Francis was asked if he would establish an official commission to study the question of whether women could be admitted to the diaconate.

“I accept. It would be useful for the church to clarify this question. I agree,” he answered. The question was one of several asked of him by the International Union of Religious Superiors.

The pope’s “I agree” and his subsequent appointment of seven men and six women to study the issue laid the foundation for an April 8 presentation on “Women Deacons? A Dialogue” at the Fremont motherhouse of the Dominican Sisters of Mission San Jose.

Bishop Randolph R. Calvo of Reno, Nevada, and Dominican Sisters Mary Peter Traviss and Gloria Marie Jones, made their presentations to a group of 80 religious and laywomen — and a few men — for a lively panel, followed by thoughtful questions.

Bishop Calvo’s talk centered on “Women Deacons: What the Past Can Mean for Today.” His experience on the topic spans more than 20 years, he told the gathering.

While serving as president of the Canon Law Society of America in November 1995, he sent a copy of an ad hoc committee’s report on “canonical implications of ordaining women to the permanent diaconate” to then-Cardinal Joseph Ratzinger.

Commissions have studied the possibility of women deacons, but what they have concluded has not been published.

As a canon lawyer, the bishop said, he is interested in church structure.

His presentation drew upon the work of historians and scriptural scholars, who point to the presence of women deacons and deaconesses in the early church.

Sister Gloria Marie, who until last fall served as prioress of the order, was in the Pope Paul VI audience hall among the 900 religious superiors when Pope Francis said he would appoint the commission.

The question of women deacons is, said Sister Gloria Marie, “more significant than giving women more power or status, as some people may think.”

“At the heart of this question is not just past history,” she said. “It is about our responsibility as church to be faithful to Jesus’ own mission that he passed on to all of us, baptized Christians, baptized in Christ, to live in His spirit, to be bearers of His grace, to be about the mission of His life here and now.”

She also brings to the question her experience as the daughter of a permanent deacon and “personally witnessing my mother’s faithful, wholehearted participation” in her father’s preparation for ordination.

“It was clearly a required and shared commitment,” she said.

The commitment didn’t end at ordination.

“It was truly a shared ministry; one was ordained and the other was not,” she said.

“Ordaining women to the diaconate would bring a certain consistency to the church’s practice,” Bishop Calvo said. “We’re not doing something that’s completely extraordinary or new. This is what women are doing now.”

Such a change, he said, “would bring the gifts of women to the ministry.” It would require, too, a “change of attitude and expectation,” he said.

“But this change would be grounded in the sources of our faith, found in the early church, situated in the context of the role women have in society today,” he said.

What can the past mean for today, he asked in conclusion.

“It means this is possible, in my opinion,” Bishop Calvo said.

PREVIOUS: Conference to look at Luther’s impact 500 years after Reformation

NEXT: Supreme Court seems to lean toward church in Lutheran playground case